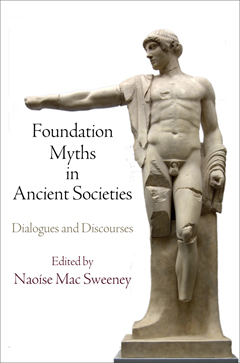 The Fall 2014 Author Q&As return today with Naoíse Mac Sweeney, editor of Foundation Myths in Ancient Societies, which looks at the many different ways that origin stories were told across the ancient world: through poetry, prose, monumental and decorative arts, and performance in civic and religious rituals. Foundation myths, particularly those about the beginnings of cities and societies, played an important role in the dynamics of identity construction and in the negotiation of diplomatic relationships between communities. Yet many ancient communities had not one but several foundation myths, offering alternative visions and interpretations of their collective origins.

Naoíse Mac Sweeney: We all tell stories about where we come from, to make sense of ourselves and our place in the world around us. In the ancient world, telling foundation myths was an important way for communities and groups to do exactly this—positioning themselves in the wider world.

Where do alternative foundation myths come from?

Alternative foundation myths occur when there is more than one tradition about the origins of a community or group. There are many reasons why several traditions might co-exist at the same time. People may have different levels of knowledge about the past, or different interpretations of past events. They may also have different views about the identity of the community in the present, which then necessarily colors the way they understand its history.

Can you explain the difference between constructivist and positivist approaches to foundation myths?

Positivist approaches are those which involve using myths as a way to reconstruct the "true facts" about the origin of a community/group. Under these approaches, it is thought that myths contain a core of historical truth, which can be discerned through dedicated scholarship. Constructivist approaches approach myths as stories which can be told, shaped, and even invented for particular purposes and to suit different agendas.

What kinds of insights can be found by viewing foundation myths as part of a dialogue that cannot be found in constructionist or positivist approaches?

By viewing foundation myths in dialogue with each other, we can "zoom out" to grasp with wider mythic discourse—by this, I mean the sum total of all the different foundation myths that are in circulation at a given time. If there are lots of different origin stories being told, the decision to repeat one but not another is significant.

How do you think this approach will affect future research in classical mythology and history?

We hope that we have demonstrated the merits of viewing myths in their wider context—not just within individual sources or in different media, but also in the context of other contemporary mythic traditions.

What are some ways that foundation myths can engage in “dialogue”?

For example, elements from one myth can sometimes end up in another, or can be reworked and invested with a new significance in another context. For example, the motif of the Delphic oracle, a common feature of Greek "colonial" foundation myths of the archaic and classical periods, gains a slightly different significance when applied to a later foundation in hellenistic Bactria (Afghanistan). Mythic traditions are not hermetically-sealed and mutually-exclusive entities, but flexible flows that interact, borrow from, and sometimes join with each other.

Can you describe any key similarities in the way in which foundation myths participate in discourse?

The foundation discourse is the sum total of all the foundation traditions in circulation, while the term "dialogue" is used to refer to the specific instances where individual myths borrow from or interact with each other.

Do you think the medium of foundation myths, whether transmitted orally, by the written word, or by artwork, significantly affects the dialogue between alternative myths?

The medium through which a myth is communicated fundamentally shapes that communication. Different media have different audiences, and can be employed by different myth-telling groups and individuals.

The book seems to focus mainly on the classical Western world. Do rivaling foundation myths in other parts of the world also participate in discourse? What are some examples?

This book focuses on classical antiquity, as Greco-Roman traditions of mythopoesis are deeply linked. One of the chapters, by Irad Malkin, highlights the contrast with Hebrew traditions of foundation myths, illustrating that in contrast to the Greco-Roman tradition, which allows for plurality of myths and discourse, the Hebrew tradition has less room for ambiguity. It is evident that not all societies engage in mythic discourse in the same way, therefore. It would be wonderful to learn from other scholars about mythic traditions in other parts of the world and periods of history.

Is this “dialogue” also present in modern folklore and urban legends?