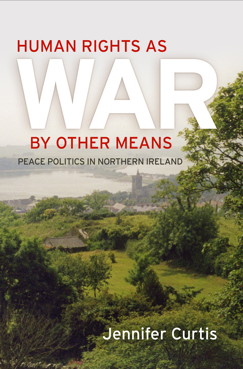 We're starting a new series here on the Penn Press Log. As our Fall 2014 season of books is released, we'll be posting Q&As with many of the books' authors, giving readers a better idea of what the books are about and what the authors think. On Tuesday, we had Cathy Lisa Schneider, author of Police Power and Race Riots. Today is Jennifer Curtis, author of Human Rights as War by Other Means, which traces the use of rights discourse in Northern Ireland's politics from the local civil rights campaigns of the 1960s to present-day activism for truth recovery and LGBT equality, and has already been called "excellent, original, and significant" and "one of the most sustained, persuasive, and comprehensive analyses of the progress of the Northern Ireland peace process since the Good Friday Agreement of 1998."

Jennifer Curtis: The Northern Ireland situation is unique in several respects, most notably the fact that non-state actors caused so many casualties. However, some issues are not unique to Northern Ireland. Whether and how people use the language of human rights to legitimate violence is a political question that is debated around the world, on a daily basis, especially regarding humanitarian interventions. I don’t think that human rights are the only kind of politics being debated anywhere, but the way rights discourse has subsumed other political debates is a global issue. I think historical analysis of these broad processes in specific settings like Northern Ireland helps us think more concretely about the ramifications of legal or abstract principles.

Northern Irish history is a caution against uncritically accepting discursive claims. Yet it is also a caution against purism about human rights politics. Rights discourse in Northern Ireland is part of a global expansion of human rights advocacy and law since the end of the twentieth century. Since this expansion, international and scholarly elites have begun to question the proliferation or politicization of human rights. We are right to be suspicious of rights talk. However, warnings about “third generation” or “invented” rights also ignore the political origins and consequences of the human rights project over time. Furthermore, it is disingenuous to defend “principles” as though that argument itself is devoid of political content and consequences—the charge of politicization usually discredits the claims of groups who only recently gained access to the promises of human rights. These dismissals also often re-assert political, economic, and legal inequalities. In this way, dismissing, rather than critically assessing, human rights discourse restricts access to both rhetorical power and legal authority.

Writing on the preferability of war by rhetorical means over war by physical violence, you maintain that nonetheless a war by rhetoric “creates vulnerabilities for the future.” Do you feel that renewed inter-communal violence in Northern Ireland is likely? Do you believe the Good Friday Agreements (GFA) is terminally flawed?

To the first question, clearly, some new and former combatants continue to pursue armed struggle, and inter-communal clashes continue. Last fall, loyalist protests about flags caused serious disturbances; anti-agreement republicans attempted to set off bombs in Belfast city center. The larger risk is not whether violence will recur, but how intense it will be, and how much it will cost:  in lives, and in people’s diminished political capacity, quality of life, and economic opportunity.

To the second question, the GFA may have been the best agreement the given parties could find in 1998; that point is arguable. But unless there is public honesty about what the GFA does not achieve, and political will to address its gaps, I think it is a fragile settlement. The recent arrest and questioning of Sinn Féin president Gerry Adams—regarding events in 1972—hints at deeper, and potentially catastrophic, absences in the agreement. The ongoing failure of parties to develop an approach to truth recovery is only one indication that the GFA has not transformed the conflict. I do not claim the GFA is terminally flawed. It may be what it was apparently designed to be:  a station on the way to a more permanent settlement. For that settlement to emerge, though, political actors and institutions must recognize and address the GFA’s flaws and oversights. Too often, the terms of debate are structured around maintaining the GFA, rather than other political goals. The agreement was hardwon and took many years to implement, so I understand why pro-GFA parties defend it vigorously. It is also possible that beneficiaries of this particular settlement are unwilling to entertain alternatives because change could threaten their positions. Ultimately, defensiveness treats critique as politically destructive, and prevents serious consideration of alterations or alternatives.

To what extent does LGBT discourse disrupt the ethnic categories institutionalized by rights discourse and the GFA? Do you believe that LGBT activism carries a potential for peace beyond the simple attainment of legal rights for its representative community?

LGBT rights discourse disrupts ethnic categories by creating effective political practices and priorities that do not center on unionism and nationalism. This is politically transformative, beyond the rights of LGBT people. There are few other examples of practical politics that are not ultimately reducible to the national conflict. The strategies and tactics of LGBT activism may offer new models for political projects. This makes it relevant beyond one community.

For Irish republicans who continue armed struggle, the Irish nation’s right to sovereignty and self-determination has ideological precedence over other rights. The primacy of national rights means that jurisdictional differences in legal rights are less important than sovereignty. Although the Irish constitution originally asserted sovereignty over the north, this claim was symbolic for many people. After the referendum in 1998, those articles were reformulated as citizenship rights for northern residents, rather than a territorial claim. At the more practical level of mobilization, previous generations of combatants were often motivated by self-defense and the assertion of less abstract rights—to housing, voting, etc. Many developed ideological sophistication about national and human rights during incarceration. In the present, young people who embrace armed struggle seem to be responding to more practical pressures as well.

You describe the GFA as having produced a “minimal” peace. What would be the basic characteristics, in your view, of a “maximal” peace?

Johan Galtung developed the concepts of negative (minimal) and positive (maximal) peace to distinguish between the simple absence of violence and institutions that allow people to seek justice nonviolently. Robust peace means that politics and society enable, or at least allow, citizens to engage in disagreements and pursue political goals. Institutions and practices that enable political agency, rather than structural or direct violence, are vital.  If political movements, like the civil rights movement, are immediately crushed by the state, a robust peace does not exist. If political parties intimidate rather than engage with opponents or dissent, a maximalist peace does not exist. Of course, these are theoretical labels—in practice, building institutions and practices takes time, effort, and continuing renewal.

One notes that though LGBT activism is presented by the activist Daniel as representing a “community of choice” as opposed to the “sectarian bullshit” of the Catholic-Protestant communities, ironically, common understanding has it that religious affiliation is more of a choice than sexual orientation.  How does “choice” and the choosing of a community, as opposed to being born into one, affect the institutionalization of collective rights?

Daniel was commenting on that irony, and emphasizing a reality of political identity in Belfast. Building political identity around sexual orientation is more difficult than accepting your ascribed ethno-political affiliation. It requires more conscious political reflection and alignment, and other people will reduce or discredit your identification to an ethno-political position. Daniel’s point really underscores how theories of collective rights fail to incorporate the limits of “choice” in lived experience. Anthropologists like Jane Cowan (1996) have critiqued liberal models like Will Kymlicka’s (2001) “right of exit” for this very problem—“right of exit” does not recognize the real limits that communities place on “choices.” This failure means collective rights can authorize and reproduce compulsion within groups. So when everyday survival is organized around the categories of nationalist and unionist, publicly challenging the failures of established politics is dangerous. When the institutions of peace reproduce these categories as the basis for legitimate political expression, other experiences and politics are further marginalized—and “choice” becomes even closer to meaningless.

What have you found to be the most useful categorization of the conflicting communities in Northern Ireland? Ethnic, religious, sectarian? (To an American, it can seem hard to understand intuitively what the obvious difference is between one white/Irish/Christian neighborhood and another.)

I usually prefer the terms “political,” “ethno-political,” or “national.” As an anthropologist, I recognize that research participants shaped my understanding of the conflict. “Unionist” and “nationalist” map onto national, arguably ethnic, identities. Most of my research participants were only nominally religiously observant, and this was not unusual in the working-class areas where I did fieldwork. This is also why I don’t often find the term “sectarian” very useful analytically. It is a helpful term for describing specific phenomena, like religious discrimination. But often in those situations, religion is a marker of political identity. Perhaps I would see the conflict differently if I had worked with the Orange Order or a Catholic organization. Religious institutions have had contested degrees of importance and influence within political groupings over time.

I think it is fair to say that communal rights have succeeded at the expense of economic rights. Other forms of rights discourse, or political logic, have never seriously threatened to displace the dominant communal rights discourse, so I don’t think this trade-off is looming on the horizon. Historically, anti-Catholic discrimination created inequalities between nationalists and unionists, making class-based alliances difficult. However, class structures are converging, in that similar proportions of nationalists and unionists are now poor, working-class, wealthy etc. This is partly a consequence of anti-discrimination legislation and enforcement since the 1970s. This is not really a huge gain, though; Northern Ireland remains one of the most impoverished (and unequal) regions of the U.K. Meanwhile, the Republic of Ireland was devastated by the 2008 financial collapse.

Jennifer Curtis is an honorary fellow in social anthropology at the School of Social and Political Science at the University of Edinburgh. Human Rights as War by Other Means is available now.