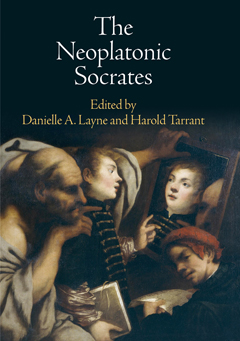 Today's author Q&A is with the editors of The Neoplatonic Socrates, Danielle A. Layne and Harold Tarrant. Today the name Socrates invokes a powerful idealization of wisdom and nobility that would surprise many of his contemporaries, who excoriated the philosopher for corrupting youth. The problem of who Socrates "really" was—the true history of his activities and beliefs—has long been thought insoluble, and most recent Socratic studies have instead focused on reconstructing his legacy and tracing his ideas through other philosophical traditions. But this scholarship has neglected to examine closely a period of philosophy that has much to reveal about what Socrates stood for and how he taught: the Neoplatonic tradition of the first six centuries C.E., which at times decried or denied his importance yet relied on his methods. In The Neoplatonic Socrates, leading scholars in classics and philosophy address this gap by examining Neoplatonic attitudes toward the Socratic method, Socratic love, Socrates's divine mission and moral example, and the much-debated issue of moral rectitude.

Penn Press: In areas where Socrates or Socratic themes appear in Neoplatonists’ work, how would you characterize their conception of Socrates?

Layne and Tarrant: The image of Socrates in late antiquity is multi-faceted and complex. He is easily regarded, in contrast to contemporary portraits that emphasize Socratic irony or ignorance, as a wise man, a sage even, whose primary influence was the saving or uplifting of the souls of all he encountered. While this image may seem strange to us insofar as we are more comfortable with a proto-rationalist Socrates who refuses to commit to any form of dogmatism, the Neoplatonic Socrates remains faithful to Plato’s depiction of a devotee of Apollo, who at the bequest of the god cared more for his soul and the souls of the Athenians than for knowledge of a human variety. Furthermore, Socratic themes in Neoplatonic works also testify to their treatment of Plato’s ethical theories, demonstrating that the philosophers of late antiquity did not abandon this strain in Socratic philosophy in favor of building a highly elaborate and ultimately ethereal metaphysics. The constant engagement of Socratic refrains from Plotinus to Simplicius instead evidences that none of these thinkers turned a blind eye to the all-important discussion of virtue and the good life, utilizing the paradigm of Socrates as an exemplar of wisdom and happiness.

What marked the change between Neoplatonism and Platonism?

The line between Platonism proper and Neoplatonism is an obscure and highly contentious issue amongst scholars of late antiquity. Although often regarded as the founder of the so-called Neoplatonic school, Plotinus considered himself a faithful follower of Plato. The same could be said of Iamblichus or Proclus. The term Neoplatonism is a 19th century neologism and, for much of the history of philosophy, this period of Platonism was considered an authentic and legitimate heir to the Platonic tradition, able to enrich the experience of students of Plato and inform their engagement with his texts. We doubt whether any clear line can be drawn between the Platonism before Plotinus and the Platonism that followed, though it would be true that some of the more conservative approaches of the earlier period do disappear, and Platonism moves from a period of engagement with a range of other Greek and Hellenistic philosophies to engagement with Christian and Gnostic thought. Clearly this last consideration has implications for the increasing tendency to see Socrates as educator and savior.

Is there a significant difference in how Neoplatonists and Platonists viewed Socratic ideals? What role does the question “Who is Socrates?” play in current studies of Platonism?

In the history of Platonism, engagement with the character of Socrates, while not definitive for the philosophical views of its adherents, can indeed be said to highlight shifts in positions. An example of this can easily be observed in Arcesilaus’ appeal to Socratic ignorance to support the Academy’s turn to skepticism. Currently, the dual image of the Platonic Socrates as either (1) an ethicist who denied knowledge while practicing the art of refutation/the elenchus; or (2) a metaphysician who held a robust theory of the forms, is tied in with a developmental understanding of Platonic philosophy, one that is based on several unproven assumptions. It is assumed that, insofar as the first image of Socrates can be located in the so-called “early” dialogues, this represents Plato’s early commitment to the ideals and concerns of his teacher while the second portrait of the philosopher represents Plato’s own shift away from the Socratic position, marking his own advancement in the middle and later dialogues toward a more epistemologically positive and metaphysically oriented worldview. The Neoplatonists, however, did not consider these apparently different depictions of Socrates as marking a shift in Platonic philosophy as such. They argued that the diverse images of Socrates depended on the concern of the dialogue, the interlocutor with whom Socrates engages and the audience that the dialogue was intended to address. Overall, the Neoplatonists believed that Socrates’ demeanor and methods could change insofar as the characters’ aims changed. There was no move away from Socrates or transition toward a new theory on the part of Plato. This ultimately safeguards the unity of Plato’s dialogues and thought, offering a more coherent picture of his work, or at least of those works that formed a regular part of their curriculum.

In your introduction, you begin with a quote that recalls the famous Delphic inscription at Apollo’s temple: “Know thyself.” How did self-knowledge inform the Neoplatonists? How did it influence their ideas?

With the Greek philosophical tradition, self-knowledge retains a place of priority. The invitation to “know thyself” was not only an ethical demand, a maxim that suggests that we know our limits and boundaries, but also divine command insofar one should also know one’s place in relation to the gods. Within the Platonic dialogues and the tradition that came to be known as Neoplatonsim, self-knowledge takes on a decisively metaphysical and ontological meaning. To know oneself is to discover oneself as soul, or even as something higher than soul. For the Neoplatonist, self-knowledge, i.e. the turn inward, ultimately becomes the basis of all knowledge and may even be said to ground reality insofar as, at the level of Intellect, Being is definitively constituted in the act of the inchoate Intellect coming to know or reflect upon itself. In conformity with the image of Socrates as a sage, Socrates himself is presumed to have a self-knowledge that is either as great, or at least nearly as great, as is possible for any human being. And for Neoplatonism, therefore, Socrates’ self-knowledge was not, or at least not primarily, epistemic, but ontological.

Can you elaborate on the aporia that Socrates seems to invoke in Plato’s dialogues? What do you think are Socrates’s (or Plato’s) motivations for this?

The value of aporia throughout the Platonic dialogues is evident and much work on this has been done in recent Socratic/Platonic scholarship. While Neoplatonists did not elaborate on the value of aporia in detail, this characteristic and its value for living the authentically philosophical life was not lost on the philosophers of late antiquity. Admitting ignorance and overcoming the problem of conceit or dogmatism, i.e. believing you know when you do not, marked the beginning of self-knowledge, the turn toward the soul and its divine content. As such, the Neoplatonic reading order (the Iamblichean curriculum) began with a detailed study of the Alcibiades I insofar as this dialogue champions the value of admitting ignorance prior to self-knowledge, and hence prior to all other learning and discovery.

Why has Socrates been given so little attention in Neoplatonist studies?

Some notable scholars, in the attempt to argue that Neoplatonism was not an authentic heir to the Platonic tradition, highlighted the loss of the Socratic, i.e. the ethical and political character, in their form of Platonism. This is not completely unfounded, as Plotinus never engages explicitly with the character of Socrates or his philosophy as such. Nevertheless, as scholarship on post-Iamblichean Platonism increases, there has been a dramatic resurgence of interest in the Neoplatonic depiction of Socrates. Ultimately, the work being done in this area will yield fruit that may overturn the prevailing mindset that this period represented a loss of the Socratic. Moreover, while Plotinus does not explicitly engage with Socrates, he certainly owes a remarkable debt to the philosopher insofar as he framed and shaped the questions and theories undergirding his understanding of the human being, its virtue and its ascent in the Neoplatonic hierarchy. A second way in which one might seek to answer this question would simply affirm that what has attracted scholars to Neoplatonism in the past has principally been the metaphysical heritage of Platonism, which had been so long divorced from what was deemed to be its Socratic heritage. Modern work on the Neoplatonic commentaries on the Alcibiades I, the Gorgias, the Phaedo, and the Phaedrus has been unable to ignore the role that Socrates plays in Neoplatonic hermeneutics.

In your opinion, what is Socrates’ most important legacy to the modern world?

Much of what we think philosophy is has much to do with how one answers the question, “Who was Socrates?” As the paradigm, or father, if you will, of our mutual endeavor, the image of Socrates we champion says a lot about what we think philosophy should be. For instance, Arcesilaus favored a skeptical Socrates arguing the merits of arguing for both sides and of suspending belief, while contemporary portraits of Socrates usually favor an ethicist who used a precise analytical method in order to flout irrationality and thoughtless religiosity. Looking to the Neoplatonic Socrates and endeavoring to entertain their portrait of him uncovers not only an interesting and highly illuminating representation of the philosopher, but also takes into account the fact that philosophy at one time was considered a way of life. It was committed to more than just uncovering truth and falsity, but was rather an authentic care of self via the care of the soul and its divine content.

But let us leave the Neoplatonists for a moment, and offer an answer largely independent of them. Perhaps the greatest legacy of all is the insistence that the unexamined life, whether private or public, is not worth living, and the lesson that we have to keep revisiting our fundamental assumptions about what it is right to be doing—particularly by asking for definitions of what we all prize and believe we are familiar with: fairness, human rights, life itself, happiness, freedom, and democracy. By asking such fundamental questions today, free from any external agenda, we can become empowered to transcend much of the conflict in the world around us.

Danielle A. Layne teaches philosophy at Gonzaga University. Harold Tarrant is Conjoint Professor of Classics at the University of Newcastle, Australia, and author of Plato's First Interpreters. The Neoplatonic Socrates is available now.