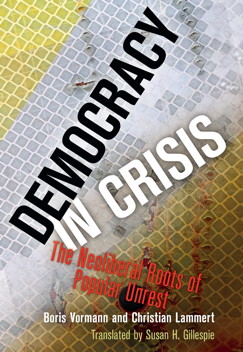 Today, we have a guest post from Boris Vormann, Professor of Politics at Bard College Berlin, and Christian Lammert, Professor of North American Politics and Policy at Freie Universität Berlin. The two are also co-authors of the new book Democracy in Crisis: The Neoliberal Roots of Popular Unrest, out now from Penn Press. In Democracy in Crisis, Vormann and Lammert argue that the rise of populism in North Atlantic states is not the cause of a crisis of governance but its result. The crisis has been many decades in the making and is intricately linked to the rise of a certain type of political philosophy and practice in which economic rationality has hollowed out political values and led to an impoverishment of the political sphere more broadly. This process began in the 1980s, when the United States and Great Britain decided to unleash markets in the name of economic growth and democracy. In today's post, they use this analysis to hone in on the politics of the impending 2020 U.S. presidential election.

In the run-up to the 2020 presidential election, the Democrats are sometimes portrayed as a deeply split party on the verge of collapse. A look beyond the borders (and walls) shows they aren't alone in their despair: most (social-) democratic parties on both sides of the Atlantic are faltering. True, some seem to have been able to work their way out of electoral mayhem, but where social democrats have won, their strategies diverged drastically. In Spain, Pedro Sánchez successfully formed a cabinet with the Spanish Socialist Workers' Party (PSOE) after running on a progressive ticket, but now is increasingly in trouble. In Denmark, the Social Democrats under Mette Frederiksen were able to win the 2019 general election by taking conservative hardliner positions on the integration of Muslim populations—and are now governing, albeit in a minority government.

Do these outcomes hold any lessons for the U.S. Democratic Party? Indeed, the party does seem confronted with the exact same dilemma: veer left and it risks losing moderate voters, but opening up toward conservative positions could disgruntle the youth and, possibly, minorities. Or the party can try to find a middle ground in a deeply polarized political system, and risk to fall between the cracks. These are difficult questions to which we have no pretense to hold the right answers. And yet, we would argue that our analysis of what crisis we are actually facing will have a strong effect on what option we would prioritize.

To be sure, a return to the old, pre-Trumpian “normal” holds a lot of promise to those who are put off by his politics of indignation and attacks on the institutions of democracy. This is why former Vice President Joe Biden has been held in favor by many journalists and commentators: he seems to embody the status quo ante. But then again, the book we just published would teach us a different lesson. It is too easy to reject Trumpism as a historical glitch or the result of an irrational craze. This perspective, which seems to dominate much of public discussion (and not just in the US, by the way), ignores the true grievances and profound problems of American democracy (and democracy abroad, by the way). These problems will not simply be solved by an anti-Trump campaign.

Is Trump anti-LGBTQ? Are his politics anti-pluralist? Is he anti-immigrant? Does he pander to anti-semites and racists? All of the above, to be sure. But above all, the reason he was elected was that he is anti-establishment.

In our book, we argue that liberal democracy is at a crossroads. Four decades of market fundamentalism have hollowed out the promises of political liberalism, not just in the United States, but equally so in the European Union and its individual member states. The promise of market efficiency has been used to reform labor markets, slash social budgets, and shift all social risks to individuals. All this happened under the pretext that no alternative was possible, simply because globalization—this overwhelming, external set of forces—had forced the hand of politicians on all levels of government. Meanwhile, elected officials, often unresponsive to their own constituencies, did in fact legislate in a way very much responsive to the desires of expanding transnational companies. This pattern of revolving doors and lucrative partnerships has led to a serious erosion of trust and a pervasive (if somewhat evasive) sense of injustice. The result has been a backlash along the fault lines that run through societies on both sides of the Atlantic: between the old and the young, between rural and urban populations, between white and non-white demographics—ultimately, between “the” people and “the” elites.

Our sincere apologies: we are rambling. You can read the rest of our argument in Democracy in Crisis, and we hope you enjoy the read. But we do think that our reflections in that book help us address the problem we initially raised: what should Democrats do? Well, the U.S. really seems to be stuck in a double crisis: one is called Trump, the other Trumpism. While Biden might hold an antidote for the former—again, he embodies the status quo ante—he himself has written a major part of the story that paved the way for Trumpism. Would he politically survive attacks on his positions on labor market reforms or on his record on free trade, for instance? In all likelihood, if he were the presidential candidate the question would become not so much whether support for Biden would suffice to grant him electoral success, but whether those who stayed home in 2016—the youth, the minorities, those who simply couldn't be bothered (or were excluded through disenfranchisement in the voting system)—would actually be willing and able to make their ballot count the next time around.

Simply running on an anti-Trump rhetoric of inclusiveness and a legacy of pro-market fundamentalism has been tried before. Hillary Clinton wasn't the only one shocked about the outcomes. However, to return to our initial observations, one thing the electoral successes in Spain and Denmark do show is that, regardless of their opposing strategies, Sánchez and Frederiksen were able to mobilize voters. What both of them did as candidates was to offer alternatives. For the Democrats, this means that a political vision needs to be articulated in opposition not just to Trump but to almost a half-century of policies that have enriched the few and harmed the many—an alternative to the politics of no alternatives.