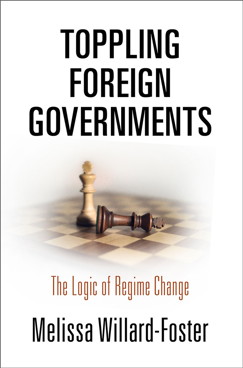 Today we have a guest post from Melissa Willard-Foster, who teaches political science at the University of Vermont and is author of Toppling Foreign Governments, new from Penn Press. Her book explores the question of why stronger nations overthrow governments when they could attain their aims at the bargaining table. She analyzes 133 instances of regime change, ranging from covert operations to major military invasions, and spanning over two hundred years. She also conducts three in-depth case studies that support her contention that domestically and militarily weak leaders appear more costly to coerce than overthrow and, as long as they remain ubiquitous, foreign-imposed regime change is likely to endure. In this post, she draws upon this analysis to provide lessons applicable to the current debate on regime change in Venezuela.

It took only minutes for the Trump Administration to support Venezuela’s opposition leader, Juan Guaidó, when he challenged the nation’s incumbent president, Nicolás Maduro, for power. Trump may have promised to “stop racing to topple foreign regimes,” but his choice to back Guaidó isn’t surprising. In fact, just about every American president since FDR has attempted foreign-imposed regime change, or FIRC, in one form or another. This history offers some lessons that shed light on the crisis unfolding in Venezuela.

First, the more fragile a leader’s political power is, the less likely that leader will back down, and the more likely FIRC becomes. FIRC’s appeal as a foreign policy tool, according to my research, rests on the apparent costs and ineffectiveness of its alternative—coercion. Instead of overthrowing foreign leaders, policymakers could coerce them to change policies, but politically weak leaders are in a precarious position. If their foreign enemy demands change that will further erode their political power, their domestic enemies may attack.

At the same time, politically weak leaders also seem relatively easy to overthrow, especially when they lack military power and domestic enemies are more than happy to help usher them out. Thus, when conflicts arise with weak leaders, policymakers expect that overthrowing them will be easier than coercing them. Indeed, my data show that FIRC is more likely in politically unstable countries. For example, the probability of FIRC rises by 112 percent for leaders with at least two predecessors taken out by a coup, rebellion, or other irregular means within the last ten years.

To understand Maduro’s dilemma, just consider Panama’s Manuel Noriega. Like Maduro, Noriega railed against “Yanqui” imperialism and broke off relations with the US. With his domestic opposition growing, Noriega couldn’t give into US demands for elections without losing influence. Although the Reagan administration offered him deals to preserve his influence, Noriega couldn’t trust that these deals would last once he was out of office.

But as Noriega continued to thumb his nose at the US, it became politically costly for the Reagan and Bush administrations to stick with coercion. When a US service member died in December 1989 after an encounter with Noriega’s forces, the Bush administration took action. Chairman of the Joint Chiefs, Colin Powell, who later questioned regime change in Iraq, made the case for it in Panama. He argued, “There will be a few dozen casualties if we go. … If we don’t go, there will be a few dozen casualties over the next few weeks, and we’ll still have Noriega.” Neither option was easy, but coercing Noriega wasn’t changing anything; regime change would.

The Panama case highlights the second lesson of regime change: as crises escalate, a single incident—like the death of a US service member—is more likely to trigger military action. The danger of escalation may explain why Maduro offered to negotiate with the opposition—he wants to avoid giving Trump justification for military force. For example, Saddam Hussein’s sons urged him to mine the Gulfprior to the US invasion, but he refused, fearing Bush might seize the opportunity to invade. If Maduro is concerned about escalation, this may be good news for US diplomats still in Venezuela—Maduro has reason to let them be. Any harm inflicted on them would give Trump an invitation to use military force.

The third lesson from the history of FIRC is that no matter how disastrous the last attempt was, policymakers still believe it will work. One reason is that past failures shape future FIRC tactics. Regime change can be imposed directly by military force or indirectly through non-military measures. It can reshape the country’s political institutions or simply oust its leader.

Whatever approach failed last is usually what policymakers avoid the next time. When George H.W. Bush and Bill Clinton’s indirect approach to toppling Saddam Hussein failed, George W. Bush capitalized on the post 9/11 public mood for war to launch an invasion. The lesson Obama drew from the costly Iraq occupation was to avoid using troops to oust Libyan leader Muammar Qaddafi. The fallout in Libya then convinced Obama to avoid using military force in Syria, where he reluctantly funded the Syrian opposition.

In Venezuela, Trump is taking an indirect approach, relying primarily on economic and diplomatic pressure. But this strategy’s success will depend on the Venezuelan military. If Russia and China can blunt Trump’s economic pressure, Maduro may retain the means to buy the military’s loyalty. This will leave Trump with two options: continue calling for regime change, but do little more to bring it about (e.g., US policy on Iran) or employ military force. If protests grow, this will suggest Maduro’s position is weakening, which could cause Maduro to lash out and Trump to choose military force.

New US presidential administrations tend to assail the outgoing one for its regime-changing ways, only to embark on the same policies once in office. George W. Bush’s presidential campaign chastised President Clinton for using the military “to build a civilian society,” but then did just that in Iraq. Obama ran on his opposition to the Iraq War, but then backed regime change in Libya. In supporting Guaidó, Trump has embarked on a similar course. It’s still unclear whether Trump will use military force. If, like Noriega, Maduro believes caving to US demands will imperil his political (and personal survival), he’ll dig in. But the weaker Maduro appears and the more he digs in, the more likely Trump will continue the tradition of forcibly toppling foreign regimes.

This essay has been reposted from Political Violence at a Glance, where it originally appeared.