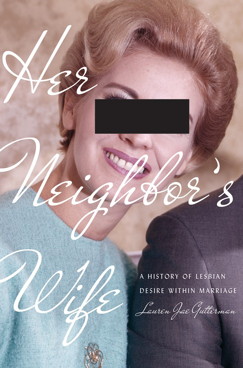 Today we have a guest post from Lauren Jae Gutterman, who teaches American studies at the University of Texas at Austin and is author of Her Neighbor's Wife: A History of Lesbian Desire Within Marriage. In Her Neighbor's Wife, Gutterman traces the stories of hundreds of women who struggled to balance marriage and same-sex desire in the postwar United States, in doing so drawing our attention away from the postwar landscape of urban gay bars and into the homes of married women, who tended to engage in affairs with wives and mothers they met in the context of their daily lives: through work, at church, or in their neighborhoods. In today's post, she offers an overview of both the lived experience of these women and the wider cultural context in which their desires were situated, enacted, and understood.

The cover of Her Neighbor’s Wife features a photograph of a white, middle-class married couple from the early 1960s. Save for the censor bar obscuring the wife’s eyes, the image hews closely to stereotypes of this era. The wife wears a pale blue Jackie Kennedy-style jacket, platinum hair, and a plastered-on smile. Stiffly, she leans in toward her husband whose gray-suited shoulder is the only part of his body captured in the frame.

In popular culture and political debates, images of postwar, middle-class, married couples like this one still loom large. For some, the quintessential married couple of mid-century TV sitcoms and magazine advertisements represents an artifact of history best left in the past. From wry internet memes to cheeky postcards, images of such June and Ward Cleaver-esque couples serve as a synecdoche for female disempowerment, male domination, heteronormativity, and cultural conformity. For others, the husband and wife at the helm of the postwar nuclear family represent an ideal. They symbolize an historical moment when Americans truly valued marriage, when contemporary social “ills” including single parenthood, divorce, and homosexuality were culturally marginalized and statistically uncommon.

Her Neighbor’s Wife suggests that both of these interpretations share a common misunderstanding of marriage in America after World War II. By focusing on the experiences of wives who loved and desired other women in the postwar United States, I show that marriage in this era was far more flexible and far less straight than either scholars or the general public tend to assume. Through oral history interviews, diaries, memoirs, and letters that married women wrote to early gay and lesbian activist groups, I gathered the stories of more than three hundred wives who loved and desired other women between 1945 and 1989. These women were able to act on their same-sex desires to a much greater degree than we might expect. They typically engaged in sexual relationships with other wives and mothers they met close to home, and they often socialized together with their husbands and children in tow.

In the postwar period, many of these husbands knew that their wives were romantically and physically involved with other women although they did not discuss it openly. Husbands who had evidence of their wives’ homosexuality could and did use this information against them in divorce court in the 1950s and 1960s to deprive their wives of child custody or punish them in the awarding of alimony and financial assets. At the same time, very few husbands chose this route. More often, because they wanted to avoid divorce, because they did not take their wives’ same-sex relationships seriously, or because they too were engaging in extramarital relationships, the husbands in this study turned a blind eye to their wives’ affairs.

In the 1970s, the space wives had carved out within marriage for their same-sex desires narrowed. As marital experts began to place new emphasis on personal disclosure and emotional closeness between spouses, and as gay and lesbian activists stressed the importance of “coming out” publicly, many wives began to speak more explicitly with their husbands about their desires for women and to name themselves as lesbian or bisexual. While some couples experimented with “open” or “bisexual” marriages, most came to understand a wife’s same-sex desires as incompatible with married life. As divorce became more common and less stigmatized, and lesbian feminists demanded that women separate from men in order to become part of the lesbian community, the couples in this study increasingly chose divorce. Rather than a straightforward “liberation,” however, I argue that wives who desired women in this period experienced more severe and direct state punishment in child custody battles as they left their marriages and built lives with other women.

We might assume that wives who desired women were largely invisible within society in the second half of the twentieth century, but Her Neighbor’s Wife uncovers a near cultural-obsession with this population in novels, films, newspapers, magazines, and scientific texts stretching back to the 1940s. In the immediate postwar period, psychiatrists feared that far more lesbians were hiding in apparently “normal” marriages than Americans knew. They warned that such women threatened the stability of the nuclear family from within by emasculating their husbands and neglecting their children. Few Americans took these warnings seriously, but psychiatrists’ anxiety did feed popular, highly sexualized representations of wives who desired women in Hollywood films and in cheap paperback or “pulp” novels. These characters were alternately portrayed as villains who left their husbands to face certain death, or victims, who could become good wives and mothers once again if only their husbands exerted their masculinity forcefully enough.

In the 1970s and 1980s, the news media and popular culture became less concerned with revealing a hidden population of wives who desired women, than with figuring out how best to label these women. As anthropologists documented the sapphic activities of otherwise heterosexual wives in suburban swingers’ clubs, and as divorced lesbian mothers’ custody battles captured newspaper headlines, novelists and filmmakers from across the political spectrum worked hard to identify the differences between lesbian and bisexual women. In fictional, social scientific, and journalistic texts, cultural creators used wives who desired women to help Americans construct a boundary between lesbianism and female bisexuality that had not seemed significant in the postwar era. By the end of the 1980s, however, a growing number of wives who desired women began to resist these labels altogether and argue that their identities, and their desires, defied categorization.

Today, stories of women—often celebrities—leaving their husbands or male partners for other women are common within the news media. Journalists often portray such women’s choices as evidence of female “sexual fluidity” and the seemingly unlimited life options available to women today. All too often, though, these stories leave out the ways in which gender inequality and legal discrimination continue to constrain such women’s lives. Although contemporary wives who desire women have far more resources available to them than they once did—from affirming self-help books to powerful, national LGBT organizations—their experiences do not represent a radical break from the past. Instead, as Her Neighbor’s Wife shows, they are part of a much longer history of women struggling to navigate between their social obligations, their familial responsibilities, their sexual desires, and their romantic inclinations.