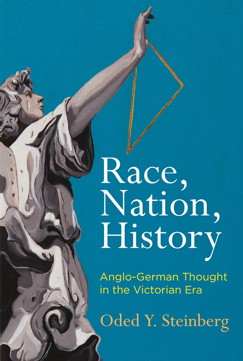 Today, we have a guest post from Oded Y. Steinberg, fellow at the Center for the Study of Conversion and Inter-Religious Encounters, Ben Gurion University of the Negev and author of Race, Nation, History: Anglo-German Thought in the Victorian Era. In Race, Nation, History, Steinberg examines the way a series of nineteenth-century scholars in England and Germany first constructed and then questioned the periodization of history into ancient, medieval, and modern eras, shaping the way we continue to think about the past and present of Western civilization at a fundamental level. Today’s blog post explores these insights and argues for their importance in the ways we continue to conceive of race in contemporary society and culture.

It is rather astonishing that during 1914, on the eve of the Great War, five Germans received honorary degrees in a ceremony at the University of Oxford. During the ceremony, Prince Lichnowsky, the German Ambassador to Britain who was among the doctorate recipients, restated the words of the deceased imperialist Cecil Rhodes (1853–1902): “the whole of humanity would be best served if the Teutonic peoples were brought nearer together , and would join hands for the purpose of spreading their civilization to distant regions.” A short while later, this imagined Teutonic (Germanic) common narrative of Britain and Germany was shattered to pieces. The words of the very controversial Rhodes, however, did accurately describe the perceptions of many Victorians, who during the second half of the nineteenth century argued that the ancestors of both nations had been the vigorous and ferocious Teutonic tribes of antiquity.

As Race, Nation, History shows, among a group of English and German scholars the notion of this shared Teutonic origin was not only situated in the deep past but in fact determined the present and future of both England and Germany. While analyzing the emergence of the “Teutonic” identity in the writing and correspondence of these scholars, the book shows how they utilized this identity in the construction of their own national communities. Second, the book demonstrates how the consideration of this “Teutonic” identity corresponded with these scholars’ idiosyncratic perception of historical periodization. In exploring these themes, the book develops a novel argument that highlights the intersections between modern ideas of periodization, on the one hand, and modern perceptions of “race,” on the other. Therefore, it sheds light on a unique yet overlooked aspect of the modern identity discourse as it was developed by these Anglo-German Victorian scholars.

The linkage between the notions of “race” and “time”/periodization is indeed pivotal for the book’s argument concerning the habitus of these nineteenth century scholars. However, the association between these notions is also very much relevant to our own current reality. In times when racial chants and policies are endorsed not only by extreme and peripheral social-political groups but also emerge from the heart of the establishment, there is a growing need to better understand the very dangerous and captivating notions of racial and xenophobic terminology. The rise of this terminology is seen, for instance, in the discourse of various populist governments that aim to gain mass support through hate speech and active discrimination of minority groups.

Periodization or historical time plays a very substantial part in this racial discourse. According to current populist claims, “everything changed” following what is referred as the latest “migration crisis.” It was even argued by a very well-known historian that the recent migrational waves into Europe mark the beginning of the continent’s decline. These migration waves, the same historian argues, were equivalent to the monumental migration period or the “wandering of the nations” (Völkerwanderung). Thus, as the Teutonic tribes brought about the “fall” of Rome (476 A.D.), so the multitude of refugees entering the EU mark the demise of Europe.

Specifically, in terms of an historical argument, the connection between the ancient tribal movement of the fourth and fifth centuries and the current migrations into Europe is, to say the least, rather anachronistic. However, it is very important to note, in relation to my book’s main argument, that there is a linkage that is being formed here between a certain migratory movement and the beginning of a new historical period. In concrete terms, 2015 is portrayed by some as the year in which a different entity (culture, race) left its autochthonic lands and crossed into the realms of the old continent, allegedly transforming it forever. An historical and even racial “time border” is, therefore, adopted in order to stress the dramatic division between the period before and after the current migrations to Europe from Africa and the Middle East. The linkage between a new historical period (or periodization) and migratory movements had already been noticed in antiquity. Just to name two examples from the Hellenistic and Christian histories: Polybius had identified the expansion of the Roman Republic in the second century B.C. as a new historical period in which Rome had arisen to its greatness. Later, the Church father, St. Augustine described in his City of God how a new era had commenced after the sack of Rome by the Visigoths. Yet in modernity, the linkage between periodization and migrations became more prevalent in the demarcation of history. It was mainly in modernity that history, following Reinhart Koselleck’s argument, “developed a theory of periodization”.

The concept of periodization, therefore, which sometimes seems prosaic and maybe banal, must be questioned and critically observed. It is not only the relations between race and periodization that are being examined in my book but also the links between these and the historical constructions of religious, national and cultural identities. The imagining of the “other,” for instance, is central in the construction of these identities in the nineteenth century as well as in our own times. In the case of the Anglo-German scholars the ultimate other/s were the Celtic/Gallic, Roman-Catholic French/Irish. It was through the adoption of the emerging scientific racism as well as the discipline of philology that these scholars underscored the essential difference between their own Teutonic Protestantism and the Celtic-Catholic “others”.

Although adopting a different terminology, many today still express a clear message of an almost innate exceptionalism. Race, of course, is far less prominent today as a biological term, especially since it was justly discredited long ago. However, as Claude Lévi-Strauss illustrated in his 1971 short essay on ”Race and Culture,” the fact that biological race is far less dominant as an idea does not mean that the discourse on cultural hierarchy is also forgotten. The contrary is true, and unlike a rather more optimistic essay (“History and Race”) that Lévi-Strauss wrote several years after WWII, in his 1971 essay he argued that the false notions of cultural superiority are destined to remain a substantial part of all human societies.