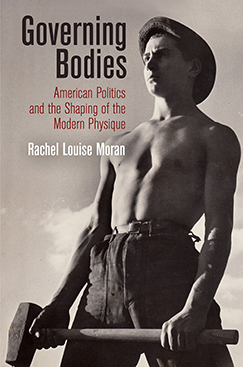 Today we have a guest post from Rachel Louise Moran, Assistant Professor in History at the University of North Texas and author of Governing Bodies: American Politics and the Shaping of the Modern Physique. Moran's book traces the tension between the intimate terrain of the individual citizen's body and the public ways in which the federal government has sought to shape the American physique over the course of the twentieth century. Here, she looks at this topic through the lens of recent government rules and the larger history of government nutrition policy.

The Affordable Care Act rule which requires calorie counts on most chain restaurant menus went into effect this May, making it one of the last components of the 2010 law to be enacted. Proponents argue that the rule will have public health benefits, namely that it will decrease American obesity rates by making more informed consumers. The legislation, which also includes most vending machines and prepared foods at grocery and convenience stores, was originally supposed to have gone into effect in 2015. It was delayed then, and again last year, after pressure from food industry lobbyists. Some conservative groups also have opposed the measure, however, citing concerns about big government. The Heritage Foundation, for instance, said the plan was overreach, while one fast food CEO said the rule was part of the “nanny state.”

With the calorie count rule taking affect alongside other consumer-oriented public health projects like soda taxes, nutrition labeling, and bans on trans fats, it can seem as if American bodies are suddenly being both contested and regulated. However, there is nothing sudden about federal anxiety about American bodies nor about political interventions into them.  These policy debates take place in the shadow of larger debates over the appropriate boundaries of U.S. state power. As claims of overreach suggest, we often imagine citizen body weight and physique as too intimate or too private a matter for regulation. But over the course of the twentieth century, policy questions ranging from physical standards to nutrition guidelines have helped make the shape, size, and development of a person’s body into an object of government regulation. These body projects belie the idea of any clear boundary between the public and private or the personal and political.

From federal research on working-class dietary needs to programs for measuring and weighing children in the 1920s, and from physical standards for soldiers during World War II to Cold War school fitness programs, there is a rich history of the political uses of physique. For example, by the late 1970s, the obsession with nutrition health was exemplified by multiple Senate hearings on Americans’ consumption of sugar, saturated fat, and salt. George McGovern had begun crusading on this point in the late 1960s. McGovern’s Committee’s 1977 report on American health, Dietary Goals for the United States, recommended food labeling, rules for food advertising, and financial support for national nutrition education. The report also, infamously, suggested that Americans eat less or decrease consumption of certain foods.

In the process, McGovern learned how contentious it was to challenge the diets of middle-class Americans. Pressure groups got loud. The Salt Institute argued that Americans would not find healthy foods palatable if they were not encouraged to coat them with salt. The International Sugar Research Foundation (the sugar industry’s lobbying group at the time), the National Dairy Council, and the National Canners Association all made similar statements. The meat lobbyists hit back hardest on the recommendation that Americans eat less meat. All argued this was government overreach. As a result, the committee rewrote its guidelines to say that Americans should “choose meat, poultry and fish which will reduce saturated fat intake.” Revisions hardly mattered, though, since, by then, the ten-year-old McGovern Committee had already been disassembled. As part of larger committee reorganization, the committee shrank dramatically and was transformed into an agricultural subcommittee. In this new position, it would not be able to cause so much trouble. Dietary Goals prompted a national conversation on nutrition, disease, and the role of the state in these matters. It did not, however, lead to the nutrition education, food labeling, or advertising regulations it had set out to tackle.

The fight over Dietary Goals was not the only nutrition policy battle of the late 1970s, however. In 1978, Congress required the Supplemental Food for Women, Infants, and Children program (better known as WIC) to include a nutrition education or counseling component for its clients. The growing attention to nutrition education also assumed that, without instruction and supervision, low-income women would make poor choices. There would now be “individual or group sessions” and materials meant “to improve health status” and “achieve positive change in dietary habits.” The changes to the WIC program also included the new rules for supplemental foods, emphasizing that they be relatively low in salt, fat, and sugar. Program head Carol Tucker Foreman explained that WIC was no longer just a “free food program,” but instead would be a program to help clients “maximize their well-being.” While these were mandates rather than recommendations or education, no one complained about a so-called nanny state here. By thinking through the body as both an instrument and an object of public policy, we can see state power at work in unexpected ways.