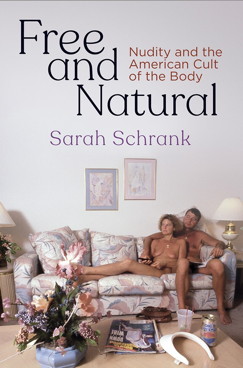 Today's guest post comes to us from Sarah Schrank, Professor of History at California State University, Long Beach and author of Free and Natural: Nudity and the American Cult of the Body, out now from Penn Press. In Free and Natural, Schrank traces the history of nudity, especially public nudity, across the unusual eras and locations where it thrived—including the California desert, Depression-era collectives, and 1950s suburban nudist communities—as well as the more predictable beaches and resorts, and she also highlights the many tensions it produced. In her post today, she discusses recent trends in nude summer travel and tourism and how they relate to this long cultural history.

As the dog days of summer 2019 glide by, and global temperatures spike, news of naked tourism, nudist retreats, and naturist hiking keep appearing in my feed. In June, for example, French papers reported of a significant uptick in the number of young people interested in nudism and the growing popularity of nude vacations. Female toplessness on European beaches is one thing, but total nudity in organized group settings seems far more radical and bold. When asked why nudism was such a growing trend, leaders of several French nudist associations reported that personal freedom, family bonding, health, and a desire to connect with nature were the major reasons why there are now almost 500 spaces in France for the naked including camps, bed and breakfasts, resorts, and beaches. The desire to be free and natural in the contemporary world not only speaks to a generational need to find liberation but to feel good in one’s skin.

It all sounds so easy but one of the reasons why naked vacations are so popular is that they are generally on private property where the etiquette rules of social nudity are accepted and enforced. Nakedness in public however, is not so easy. In the Parisian urban park, Bois de Vincennes, for example, the city-sanctioned clothing optional zone attracts voyeurs who sexually harass sunbathing women. Paris has responded by deploying police patrols to ensure the clothing-optional zone is safe, but the presence of cops detracts somewhat from the “free and natural” vibe of getting naked in public.

My book Free and Natural: Nudity and the American Cult of the Body tells the story of how nudist living in the United States took shape over the twentieth century and its new variants in the twenty-first. As in France, American nudists have long explained that social nudity produces feelings of freedom and wellbeing, helps erode uptight sexual mores and body shame, encourages health in both body and soul, and tightens the bond between the self and the natural world. Here, too, after decades of decline in nudist organization membership, social nudity seems to be on the upswing largely because of the hundreds of naked vacation spots and nude experiences on offer in the American travel market. I argue in my book that the current popularity of nude travel is, in part, a desire to be free and natural but also a response to the fact that public nudity is generally illegal everywhere in the United States and the only way to participate is through private clubs and camps and, indeed, commercial vacations. In short, the liberated experience of the naked body in nature is for sale.

Nudists have long tried to reject consumer capitalism through the naturalness of their bodies and over the past twenty years, local nudist groups across the country have been organizing nude hiking trips as a way to inexpensively integrate the body with nature and take the naked retreat experience out of the commercial marketplace. The problem, however, is that the fear of violating local nudity ordinances, and inviting citations or arrest, means that to be a nude hiker involves intimate knowledge of the sex and obscenity laws of any particular county as well as the most isolated trails where the unclothed are most unlikely to meet the clothed.

Because of the difficulty in practicing free outdoor nudity in nature, commercial outdoor nude tourism has evolved into the international travel activity reported in this summer’s French press, and it really is growing as much as the papers say. In 2014, the American Association for Nude Recreation reported that nude tourism generated more than $440 million a year in the United States alone. Mom-and-pop nudist camps that survived the upheavals of the 1970s sexual revolution are being replaced by upmarket nude resorts with health spas, high-end restaurants, and other fancy amenities. Nude cruising has also become big business. Bare Necessities Tour and Travel, Inc., a nude cruise line, reported to The Economist that they had grown exponentially from their first cruise of 36 passengers in 1991 to a 3000-passenger Caribbean cruise in 2013.

With most of the big money in nude tourism coming from retirees with the time and disposable income to spend on vacation packages, it behooves those profiting from it to attract younger customers. The major American nudist organizations reported in the early 2000s that their membership rolls had ceased growing and there was concern that social nudism would ultimately die out in the United States. Nudism simply did not hold the same appeal for Generation X, and it certainly did not for millennials. Yet one new avenue has been forged by young nudist groups who organize through social networking sites. Nudepalooza in Kissimmee, Florida, attracts hundreds of twenty-somethings while Bodyfest, which takes place each year at established nudist clubs, draws fans of Burning Man and other alternative hippie-New Age-super festivals. Bodyfest also runs PhotoNaturals.com, which encourages the participation of the young and beautiful at outdoor nudist events and retreats, circulates the images online, and compensates the participants. While the photographs emphasize the outdoor naturalness of the sites in which the social nudity takes place, the free part as fallen away: As one female PhotoNaturals.com model has said, “If I’m going to be naked on the Internet, I better get paid for it.” The models’ naked experience may document outdoor summer recreation, but there is something about it that doesn’t quite challenge either the sexualized objectification of the body or its commodification. The photographs invite a sexualized gaze which detracts from the nudist exercise of refuting the objectified body and focusing on, as one nudist group puts it, “how you feel inside.” The often slippery line between being a naked body on display and a liberated body feeling free and natural notwithstanding, the takeaway from this summer’s nude vacationers is that to feel good inside, one needs to get naked outside—happy trails!