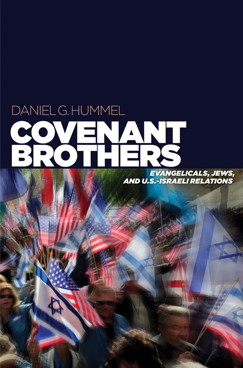 This guest post comes from Daniel G. Hummel, author of Covenant Brothers Evangelicals, Jews, and U.S.-Israeli Relations. Hummel's book portrays the dramatic rise of evangelical Christian Zionism as it gained prominence in American politics, Israeli diplomacy, and international relations after World War II and reveals how an unlikely mix of Christian and Jewish leaders, state support, and transnational networks of institutions combined religion, politics, and international relations to influence U.S. foreign policy and, eventually, global geopolitics. Here, Hummel brings insights from his research to bear on the history of American evangelical tourism in Israel and the role of the Israeli state in facilitating it during the past half-century.

Today, evangelical tourists to the Holy Land often experience a highly curated, tightly controlled experience of the State of Israel. Itineraries invariably spend a lot of time in Jerusalem, especially the Old City, the site of many of Jesus’ miracles and teachings. In larger tours, an Israeli guide, trained by the Ministry of Tourism on how to sanguinely relate to evangelicals, will team up with a Christian pastor to provide a Christian and a Jewish perspective on the land and its history. Tours likely visit the Galilee region and Jesus’ home town of Nazareth, home to thousands of Arab Israelis but remembered by tourists for their biblical significance. Many evangelicals visit Tel Megiddo, an ancient settlement and name inspiration for the Battle of Armageddon, which many believe will take place in the area. This thoroughly biblical Holy Land tour is often paired with celebratory exposure to modern Israeli society—an hour at one of the large open food markets, an outing to the Knesset building, a visit by a midlevel Israeli diplomat. All told, while evangelical tourists may spend weeks in Israel, their experiences—authentic as they are—often hardly scratch the surface of the complex, difficult, and confusing reality of the land. Many tourists avoid entirely the Arab Israeli and Palestinian Arab populations. Though there are of course limitations for any tour, evangelical Holy Land tours are often designed to function as both religious and political tourism.

This current reality has a very recent origin. In fact, the modern Holy Land tour is barely fifty years old. In the wake of the Arab-Israeli War in June 1967, which saw Israel conquer territories from surrounding Arab states and govern through occupation hundreds of thousands of Arabs in the West Bank—including areas vital to Israeli tourism like the Old City in Jerusalem and the city of Bethlehem—the Israeli government exerted great efforts to reimagine how foreigners, especially Americans, encountered its sites. The government funded research tours for Israeli officials to investigate American Protestants, especially the more conservative evangelicals and fundamentalists who celebrated the 1967 war as a fulfillment of biblical prophecy. The Ministry of Tourism also relied on the advice of evangelical leaders, some of whom had lived in Israel-Palestine for decades as proponents of closer evangelical-Jewish relations, to recreate the tourist experience.

Numbering in the millions, American evangelicals were too diffuse for stock political messaging. Evangelical tourism developed in the late 1960s and 1970s through overlapping church networks, family-owned tour agencies, and sundry tour packages, often precluding tourists from returning home with similar experiences, let alone shared political commitments. Recognizing this complexity, the Ministry of Tourism and evangelical advisers marketed the Holy Land to encourage biblical understandings of the land of Israel. Their central motif was Israel as the land of the Bible. Organizers tapped into evangelical fascination with Jesus and portrayed tourism to Israel as “walking where Jesus walked.” This New Testament-inflected Holy Land combined themes of biblical history and the spiritual legacy of the land, all the while circumventing most of the 2,000 years of history between the time of Jesus and the modern state of Israel. A type of pro-Israel politics followed implicitly from this theme: the land of the Bible was also the land of Israel, the homeland of the Jewish people, a piece of land (the only piece) divinely covenanted by God to a group of people. Contemporary Arab claims to the land and Palestinian demands for statehood paled in light of these tour experiences.

Much of this early attempt to generate evangelical tourism and impart pro-Israel meaning culminated in the Jerusalem Conference on Biblical Prophecy in June 1971, a joint venture between American evangelicals, evangelical leaders located in Israel, and the Israeli government. The four-day event brought 1,500 Christian tourists to Jerusalem, many of whom attended the conference as part of longer Holy Land tours. The conference signaled the potential of American evangelical interest in Israel. With an opening speech from David Ben-Gurion, the first Prime Minister of Israel, the event was cloaked in a type of official Israeli endorsement.

The spectacle of the conference is not the end of the story, however, nor is there a straight line from 1971 to the Christian Zionist movement of today. Like any tourism official or scholar of tourism knows, controlling the meaning of tourist experiences is an art, not a science. It is fraught with difficulties of cross-cultural contact, expectations and preconceived notions, and processes of meaning-making that are unpredictable. The 1971 conference was no exception. Theological differences over the ultimate significance of the state of Israel, and political differences over how closely the conference should align with the Israeli government, plagued the planning process from the start. While the Israeli government hoped some type of declaration in support of Israel would result from the conference, the only thing that materialized was an unofficial endorsement of Israel’s control of East Jerusalem signed by six conference speakers. The tour revenue of more than a thousand middle class Christians was surely a boon to the local tourism industry, but the pre-conference projections of 3,000 or more attendees would have been far more significant.

Even with these setbacks, Holy Land tourism became integral to the growth of evangelical Christian Zionism in subsequent decades. Though the Ministry of Tourism failed to impart their particular political ideas to most evangelical visitors, the thousands who undertook structured Holy Land tours did not leave empty-handed. They carried the seeds of an experiential Zionism, forming the bedrock of future pro-Israel politics. Later leaders of the Christian Zionist movement—Jerry Falwell, Pat Robertson, John Hagee—trace their own political awakenings over Israel to life-changing tours of the Holy Land. Through the structured experience of the land of the Bible, evangelicals were told that they intertwined with the destiny of modern Israel; both were deeply bound to God through covenants. By traveling to the Holy Land, evangelicals incorporated the post-1967 state into their own identity, on the way to becoming the largest and most consistent pro-Israel lobby in U.S. politics in the twenty-first century.