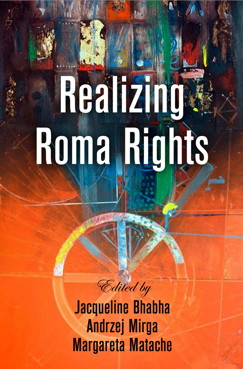 The book brings to the forefront voices of leading and emerging Romani scholars, from established human rights experts to policy and advocacy leaders with deep experience, to investigate anti-Roma racism and document a growing Roma-led political movement engaged in building a more inclusive and just Europe. In this post, the editors explore how the European legal infrastructure around human rights has treated the Roma people in recent history.

On March 14, in Fogarasi and Others v. Romania, the European Court of Human Rights (ECtHR) condemned Romanian police officers for their inhuman treatment of a Romani family. According to this highly respected international human rights court, the EU member state’s conduct, as enacted by its law enforcement agents, constituted a breach of Article 3 of the European Convention, which provides that “no one shall be subjected to torture or to inhuman or degrading treatment or punishment.” The facts of the case were stark, but alas not unusual: police officers had subjected four members of a Romani family—father, mother, 13-year-old daughter, and grandfather—to severe violence while detaining them at the police station and interrogating the 13-year-old. One family member needed three months of medical care for the injuries caused by the police officers. The Court found that the Romanian courts had failed to properly investigate the incident despite an official complaint, and therefore, the egregiously abusive police behaviour had gone unpunished. Realizing Roma Rights, a collection of essays edited by us and published by the University of Pennsylvania Press will be released within a month of the Fogarasi decision. Both case and book address the troubling question of persistent anti-Roma stigma, discrimination and violence.

The case is a rare example of justice served, albeit with almost a decade of intervening delay. Regrettably, as the book highlights, impunity is the norm for the vast majority of Romani victims of state violence and structural, anti-Roma discrimination, because they are not fortunate enough to access the competent legal representation that led to a successful outcome in this case. Why does this state of affairs endure despite decades of anti-discrimination legislation and numerous official pronouncements condemning anti-Roma violence? The answer is complex but revolves around the inadequacy of national jurisdictions as guardians of ethnically unbiased justice for the Roma minority. This lacuna in the European rule of law has yet to be carefully explored in critical research or practically addressed through vigorous training across the multiple relevant tiers of national judicial system.

As a result of these gaps, the discrepancy between the practice of national courts and the jurisprudence of the ECtHR remains as stark now as it was more than two decades ago when the European Court first addressed the issue. Cases of Romani compulsory sterilization, mass segregation of children in special schools, forced evictions, and deportations have avoided censure by a tacitly complicit cadre of national officers and judges. These cases only finally receive effective sanction when they reach the ECtHR.

The shame and humiliation engendered by persistent discrimination also undermine the confidence needed for contestation. Only a fraction of the serious rights violations perpetrated against the Roma community find their way into formal complaints. A recent research project led by the François Xavier Bagnoud (FXB) Center for Health and Human Rights at Harvard University in partnership with the Serbian Center for Interactive Pedagogy confirmed this. One interviewee, a Romani university student, noted that she felt like crying every time she talked about her experience of discrimination in school and was proud of herself on the few occasions she managed to stay collected. Another student added, “When I think about the past and reflect on experiences of discrimination [in school], I feel that they took something away from me.” The research found that for thousands of Romani children and youth, experiences of discrimination and bullying in schools are daily occurrences and powerful precipitators of school dropout and poor performance. Many European authorities also still view schooling as a tool for “civilizing” the Roma rather than a fundamental human right to be realized without discrimination and across all communities.

The lack of political and discursive power within the Roma community has contributed to relatively weak collective responses to the racism of the majority community and to state sponsored injustices. Earlier this year, Janusz Korwin-Mikke, a member of the European Parliament, was rightly suspended for 10 days and fined €9180 for stating that “…women must earn less than men because they are weaker, they are smaller, they are less intelligent…” Yet no sanction had been applied in 2010 to Csanad Szegedi, another a member of the European Parliament, when he stated that “[w]e would force these [Roma] families out of their dwellings … Then, yes, we would transport these families to public order protection camps … No doubt there will be people who show no improvement. They can spend the rest of their lives in these camps.” Five years after this outrageous statement, the European Parliament passed a resolution presenting a diametrically opposed view. It rightly stated that:

The contradictions, challenges, and complexities that arise from these contrasting perspectives are thoroughly explored in our new volume. Realizing Roma Rights asks why policy makers continue to insist on Roma “integration” at the price of vigorous prevention of discrimination and why an extensive range of paternalistic and ineffective programs, laws, and policies endure. An interdisciplinary volume which includes work by Roma and non-Roma scholars and activists on both sides of the Atlantic, Realizing Roma Rights explores the impacts and gaps of national and European policy initiatives as well as current forms of anti-Roma institutional discrimination and popular racism. Several writers examine initiatives led by European and US institutions in defending Romani rights, while others analyze the dynamics of social and political mobilization of the Roma. The volume is a powerful tool for those wishing to learn more about one of the most egregious human rights challenges in the heart of Europe, and about the range of imaginative strategies being advanced to redress this situation.