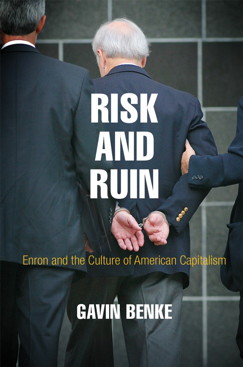 Today, we have a guest post from Gavin Benke, a lecturer in the writing program at Boston University and author of Risk and Ruin: Enron and the Culture of American Capitalism, new from Penn Press. Benke's book seeks to contextualize the 2001 collapse of Enron, at the time one of the largest companies in the world with revenue of over $100 billion. Benke dives deep into the Enron archives, analyzing company newsletters, board meeting minutes, and courtroom transcriptions to chart several interconnected themes across Enron's history and to situate it within the larger history and culture of late twentieth-century American capitalism. In today's post, he examines what Enron's relationship to environmental politics can reveal to us today, especially against the backdrop of how both corporations and the Trump administration relate to environmental issues.

With Scott Pruitt heading the Environmental Protection Agency and Donald Trump in the White House, this does not seem to be a good time for environmentalists. Indeed, Trump’s decision in 2017 to withdraw the United States from the Paris Climate Agreement has been greeted in some quarters as a devastating blow to the planet. But for those of us who are alarmed by this action, there is at least some reason for optimism. In the wake of Trump’s decision, many American corporations have opted to follow the Paris Agreement’s guidelines and goals. This might seem surprising at first glance. After all, with Trump’s business background, one would think he would adopt policies that would please corporations.

However, this is not the first time corporations have diverged from supposedly business-friendly administrations over environmental policy.  In 2001, for example, executives at the natural gas company, Enron, found themselves at odds with President George W. Bush’s opposition to the Kyoto Protocol, an earlier international effort to fight climate change. While Enron’s CEO, Ken Lay, enjoyed a long relationship with the president and his father, their different views on the agreement hints at Enron’s longer involvement in environmental politics.

This connection between Enron’s business and the politics of climate change is one of the themes that I follow in my book, Risk and Ruin: Enron and the Culture of American Capitalism. Of course, the company is most often remembered as one of the most notorious cases of business fraud ever seen in the United States. This distinction is well-earned. Starting in the late 1990s, the company hid losses and inflated its profits. The fallout from the scandal even resulted in jail time for some of the company’s executives. What has been mostly forgotten, however, was how Enron’s Chairman and CEO, Ken Lay, embraced a burgeoning environmentalism in the late 1980s. The executive was convinced that as Americans grew increasingly concerned about the environment—and climate change in particular—Enron was a company that was “in the right business at the right time.” The claim might strike us as funny today. After all, Lay and Enron would appear, on the surface at least, to be natural antagonists of environmentalists. Lay was a conservative businessman and, as a natural gas company, Enron dealt in fossil fuels. Still, natural gas is cleaner than oil, and Lay was quick to grasp that the changing politics around the environment presented Enron with an opportunity.

Throughout Ronald Reagan’s time in the White House, American environmentalists had to contend with a president who was hostile to environmental regulation. However this standoff began to thaw a bit in 1989. Reagan’s successor, George H.W. Bush, was aware of the greening attitudes of Americans, and took a different approach. Notably, the 1990 amendments to the Clean Air Act represented an early and significant achievement for his administration. The result of the act was a “cap and trade” system for trading harmful emissions, which represented a major policy innovation. It was a market-oriented approach to a something until that point had been seen as a regulatory issue. For American environmentalists, though, Bush was not always a reliable ally.

In 1992 Bush was hesitant to attend an international summit in Brazil on the environment, where global warming would prove to be a major issue. Political habits, it seemed, died hard. Along with a range of conservative groups, some business interests advised the president against attending the meeting. Ken Lay was a notable exception. Enron’s leader was a longtime Republican and actively involved with party politics, but in this instance he bucked the party line and urged the president to attend the summit. From Lay’s perspective, when it came to climate-friendly policies, the stakes were low. As he wrote to the president, he was skeptical that “the oceans will boil in a few years if we don’t address greenhouse gas emissions.” At the same time, though, Lay was dubious about claims that the United States would, “suffer from economic ruin if prudent steps are taken to reduce CO2 emissions in order to protect the global environment.” There are a number of ways to read Lay’s advice to the president.  It could indicate the executive’s naïveté, reasonableness, or cynicism. Undeniably though, Lay’s openness to incorporating environmental protections into business matters foreshadows how many corporations seem to be approaching the issue today.

His letter to the president suggests the Texas executive was aware that climate change was not going to go away as an issue for Americans. Even after the summit, Lay drew a tight connection between business and environment in his public remarks. Specifically, Lay would mention natural gas a key component to combating global warming. Importantly, though, Lay was looking beyond the relatively short-term outlook of presidential terms. Rather, the environment turned out to be a part of a long-term strategy. In fact, it put the company in a good position when Bill Clinton entered the White House. Finding common ground with the new Democratic administration was relatively easy. Lay even served on Clinton’s Council on Sustainable Development. Throughout the 1990s, Lay continued to craft the company’s public and government relations, as well as its business activities, around the environment, even investing in wind and solar power.

In all of these instances, the executive was primarily looking out for his company’s interests. Environmental sensitivity could offer a strategic advantage. In California, for example, company research revealed that Californians were “disposed to buying green power.” Some executives planned to promote what they called a “green electron image for Enron” in the state. Environmental responsibility seemed as though it would be a big part of Enron’s business moving forward. But this would not be Enron’s legacy. In California, Enron executives were cast as chief villains when the state faced a chaotic energy crisis in 2000 and 2001. Indeed, some of the company’s energy traders had developed trading strategies that were exploitative and in some cases, out and out illegal. Bigger problems for Enron soon followed.

The California fiasco was the result of a broad internal financialization inside the company that I trace throughout Risk and Ruin. Eventually, this strategy grew wildly out of control alongside widespread accounting fraud. Towards the end of 2001, the company declared bankruptcy and the word “Enron” was well on its way to becoming a quick reference point for corporate wrongdoing.

Still, even if Enron is no longer associated with corporate efforts to fight climate change or sustainable development projects, this largely-forgotten part of Enron’s history helps explain why some corporate leaders are adopting environmentally-progressive stances even as the Trump administration adopts anti-environmental policies while purporting be a friend to business. After all, corporations must look beyond four- or eight-year presidential tenures. Instead, the businesses that support the Paris Agreement are, as Ken Lay did with Enron, making a longer bet on the future.