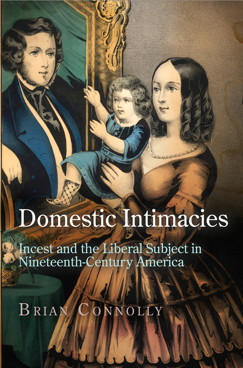 Today we have a guest post from Penn author Brian Connolly, whose new book, Domestic Intimacies: Incest and the Liberal Subject in Nineteenth-Century America, gives a history of incest and its various prohibitions as they were defined throughout the nineteenth century. Connolly teaches history at the University of South Florida.

When conservative defenders of traditional marriage invoke the specter of incest, they do so in order to provoke disgust in their listener or reader. They presume that incest has always been prohibited, that it is a universal taboo that has never changed. Yet, this is a presumption with little basis in history. Since the late eighteenth century, the meaning of incest, in relation to the law,  religion, and  reproduction has undergone significant change. In 1820, for example, James Kent, one of the most influential jurists in the United States and a future Supreme Court justice, lamented the absence of a law prohibiting incest in the state of New York. “We are in a singular situation, in this state, and, probably, one unexampled in the Christian world, since we have no statute regulating marriage, or prescribing the solemnities of it, or defining the forbidden degrees.” Singular situation or not, it was not until 1830 that New York passed its first law prohibiting incest.

The situation was similar in the nation’s churches. There the incest prohibition, with a great deal of local and denominational variety, was derived from the Anglican Table of Kindred and Affinity, which enumerated sixty kin relations that fell within the purview of the incest prohibition. These included more relations through marriage than relations through blood. Even with a clearly defined incest prohibition there was near constant conflict over the meaning and parameters of the incest prohibition. The Presbyterian Church, for instance, was embroiled in a great debate between 1824 and 1842, when two ministers from North Carolina married their deceased wives’ sisters, a relation that was formally prohibited as incestuous. The conflict fizzled out in 1842 when the Presbyterian Assembly, amid great discord, chose to leave the latter marriage intact but not change the ecclesiastical law. Earlier, in 1810, when Jabez Huntington, nephew of Revolutionary War hero Jedidiah Huntington, proposed marriage to his deceased wife’s sister Sally Lanman, the pastor of their congregation, Walter King, refused to officiate at the marriage. After Huntington and Lanman found another congregation to recognize their marriage, King refused to administer communion. Despite the fact that King was upholding the incest prohibition as put forward in the Westminster Confession of Faith, to which his congregation subscribed, in 1811 his congregation voted to fire him for impinging on the liberty of Huntington and Lanman. Even here, in religious circles, the voice of the people trumped the supposedly immutable law.

We might, then, turn to the correlation of incest and reproduction that provides the specious logic of Irons’s anxiety. Incest was not commonly linked to hereditary degeneration until the mid-nineteenth century in the United States. Orson Fowler, the most popular phrenologist in the nation, was among the strongest proponents of this understanding of the incest prohibition. Indeed, he argued that the only reason to prohibit incest was to avoid its hereditary consequences. Of course, at the same time, Fowler argued that the most fundamental human capacity was sexual desire (or “amativeness,” in phrenological terminology), something that needed to be exercised throughout one’s life. He peppered his phrenological tracts with instructions for fathers to make love to their daughters and sons to their mothers. So much for the immutable, stable incest prohibition!

Finally, the most dramatic transformation of incest law in the United States occurred in the 1970s and 1980s, when incest was redefined as a form of domestic sexual violence. This was a result of the insistent activism of second-wave feminists. Yet, such change did not stem from a belief in the inherent purity of the nuclear family; instead, it derived from the belief that the one persistent, one might say traditional, quality of the family was its structured inequality between husband and wife, father and daughter, and thus its penchant for sexual violence from which daughters especially needed protection.

All of which is to say that marriage, like incest, has never had a definite and stable meaning. Attitudes about incest, like attitudes about marriage, family, and homosexuality, change over time. The revulsion that Irons and Santorum seek to provoke by linking incest and homosexuality assumes that neither has a history. Yet, as the profound change in attitudes to same-sex marriage in little more than a decade demonstrates clearly, even seemingly timeless institutions such as family and marriage inexorably change over time.