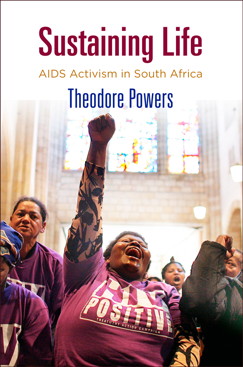 Today, we have a guest post from Theodore Powers, Assistant Professor in the Department of Anthropology and the Global Health Studies Program at the University of Iowa and author of Sustaining Life: AIDS Activism in South Africa. Drawing on extended participant observation and in-depth interviews with members of the South African AIDS movement, Powers' book explores how non-state actors, from caregivers to activists, worked within the state to transform policy and state-based institutions in order to improve health-based outcomes. In today's post, Powers explores what we can learn from this history of activism amid the ongoing COVID-19 pandemic.

We are currently living in a moment when the emergence of a highly infectious pathogen—severe acute respiratory syndrome coronavirus 2—better-known by the name of the disease it causes, COVID-19—has led to a new pandemic. Many have been shocked to see inaction and obfuscation of science knowledge by political leaders, which has resulted in higher rates of infection, avoidable deaths, and growing anger at the epidemic’s impact. While it is too early to know the extent to which initial denials of COVID-19 impact exacerbated the pathogen’s spread, it is clear that political inaction, misleading messages, and support for scientifically unproven treatments have increased the social impact of a global epidemic.

The current situation has led many to seek out historical parallels in order to better understand alternative paths forward in addressing the COVID-19 epidemic, with many examining the 1918-20 Spanish flu pandemic and earlier applications of mass quarantine in response to bubonic plague. Others have examined how a rising tide of populism on both sides of the Atlantic has facilitated the rise of political groups to power, which has led to epidemic responses with authoritarian political tendencies. While this work has revealed thought provoking and disturbing parallels, the tendency to analyze broad historical trends and forces underestimates an important factor: people.

Contemporary events highlight that it is people working within the state that control how government institutions operate and produce effects that impact society. Rather than impersonal institutions that reflect normative criteria, it is increasingly clear that people are the state. But what are the conceptual implications of framing the state as people? What might happen if different groups were able to influence the development of state policies based on the principle of social justice?

My book, Sustaining Life: AIDS Activism in South Africa, tells that story. In it, I offer a historically informed ethnographic analysis of the campaign for HIV/AIDS treatment access in South Africa. The book analyzes how the HIV/AIDS movement, constituted by activists, NGOs, and others, occupied the state to transform policy, renovate health institutions, and sustain the lives of people living with HIV/AIDS in South Africa. Building on extended participant observation and in-depth interviews with members of the HIV/AIDS movement, I trace how political principles developed by the anti-apartheid movement were leveraged to build a broad coalition that changed national HIV/AIDS policy and increased access to treatment through institutional transformation.

My story about the revamped state health system shows how the state can serve as a mechanism for enabling the representation of different voices in a pluralistic society. The campaign for treatment access underscores that it is people that produce social effects associated with states, and that activists, NGOs, and other entities can alter policy and transform state institutions to produce dramatic changes in society. The South African HIV/AIDS movement was able to “occupy the state” to expand treatment access, an outcome that required overcoming the opposition of a powerful group of state elites that stringently limited access to HIV/AIDS treatment, questioned the scientific link between HIV and AIDS, and actively supported scientifically unproven remedies as treatment. Notably, this clique of “AIDS dissidents” included South African President Thabo Mbeki and Minister of Health Manto Tshabalala-Msimang, among others.

The story of the HIV/AIDS movement’s successful campaign for treatment access is one that highlights an important insight as we seek to stem the tide of the COVID-19 pandemic: the power of those who control the commanding heights of the state can be overcome, and that a state’s capacity to respond to a deadly pathogen can be redirected in ways that protect human life rather than exacerbate its social effects. As we collectively grapple with how we might go about addressing inaction, obfuscation, and avoidable deaths relative to COVID-19, the work of South African HIV/AIDS activists offers important lessons in how we might go about creating a state that sustains human life.