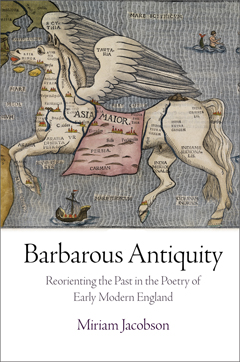 Today's Q&A is with Miriam Jacobson, author of Barbarous Antiquity: Reorienting the Past in the Poetry of Early Modern England. In the late sixteenth century, English merchants and diplomats ventured into the eastern Mediterranean to trade directly with the Turks, the keepers of an important emerging empire in the Western Hemisphere, and these initial exchanges had a profound effect on English literature. While the theater investigated representations of religious and ethnic identity in its portrayals of Turks and Muslims, poetry explored East–West exchanges primarily through language and the material text. Just as English markets were flooded with exotic goods, so was the English language awash in freshly imported words describing items such as sugar, jewels, plants, spices, paints, and dyes, as well as technological advancements such as the use of Arabic numerals in arithmetic and the concept of zero. Even as these Eastern words and imports found their way into English poetry, poets wrestled with paying homage to classical authors and styles, and as Renaissance English writers including Shakespeare, Jonson, Marlowe, and Chapman weighed their reliance on classical poetic models against contemporary cultural exchanges, a new form of poetry developed, positioned at the crossroads of East and West, ancient and modern.

Penn Press: Barbarous Antiquity argues that Renaissance English writers had to balance classical poetic models with the realities of contemporary trade. How had the classical models described the East?

Miriam Jacobson: In fact, the classical writers from which the Renaissance English poets draw in my analysis (Ovid, Horace, Musaeus) describe a largely Mediterranean landscape, not exactly what we today would call Eastern or Asian. But this landscape was part of ancient Greece and the expanding Roman Empire. By the time we get to the late sixteenth century, the same Mediterranean landscape was under Ottoman control. So I’m not looking at classical representations of the East, but rather at how the Mediterranean, the Levantine coast, and parts of Asia became coded as Eastern in late Elizabethan England. Suddenly the familiar literary landscape of Ovid’s Metamorphoses was a space that was occupied and inhabited by foreign, religious Others. Classical writers do talk about the far reaches of their empires (usually Asia minor) as boundary lands, and characters who come from these places are often described as barbarous. One of these figures, the Scythian enchantress Medea, is the subject of my current research for the next book.

Can you describe the social impact that adopting zero and Arabic numerals had on Renaissance England?

England assimilated Arab numbering and arithmetic relatively late in the early modern period, when compared with Italy and Europe. Historians of science and mathematics suggest that this is because Italian merchants trading with Arabs in the thirteenth century were the first to adopt these practices. My research has found that Arab numerals and arithmetical practices did not become mainstream (i.e. used by everyone, not just merchants and specialists) until the middle of the sixteenth-century, which I trace both to the publication and reissue of Robert Record’s introductory arithmetic text The Ground of Arts and to the adoption of arabic numerals by printers for page numbering. The social impact was huge: zero was part of a larger system of calculation (arithmetic) that allowed people to express both large sums and negative balances swiftly on paper. Suddenly you could express quantities and absences in the abstract. Zero became a versatile metaphor for playwrights and poets as well. A number of scholars have discussed the use of zero as a metaphor in Shakespearean drama, but I’ve found that in poetry the metaphor is more materially embodied.

In addition to mathematics, which import do you think had the greatest impact on society in England?

That’s a tough question, because I’ve only skimmed the surface of Mediterranean and Asian imports in Renaissance England with this book. Each chapter in my book discusses different imports: words, sugar, zero, horses, bulbs, pearls, dyes, and ink. I chose these imports primarily because of the (also imported) words used to describe them—words that were new to Elizabethan England. In other words, there are more important imports that changed early modern society and economy than the ones I discuss in my book (gunpowder, slavery, porcelain, and later tea and coffee). But my book primarily reads Renaissance English poetry as a kind of social change, and the most important imports that enact social change in literature are words themselves.

Where in Shakespeare's works can we find examples of East–West exchange on the level of language? Are they more heavily concentrated in some works rather than others? If so, why?

I’d like to clarify first that I’m talking about figurative language and philology (word history; word trajectories) here, and not about the larger system known as language, which includes patterns and equations such as grammar and syntax. Shakespeare’s plays and poetry are full of imported Asian and Mediterranean words and expressions, these things are not limited to poetry or to drama. But a lot of wonderful scholars have already addressed Shakespeare’s use of Eastern terms and metaphors in his drama (for example, the use of “Turk” in Othello), whereas no one has looked for East–West exchanges within his narrative poems The Rape of Lucrece and Venus and Adonis. I think this is because we’ve all assumed that those poems are classical (Roman; Ovidian) in theme and therefore couldn’t possibly engage with the early modern East. My response to that impulse is to say but of course they do! Any early modern poem that pays homage to Ovid’s Metamorphoses (Venus and Adonis) and Fasti (Lucrece) is automatically engaging with the early modern East, not only because of Ovid’s Mediterranean setting, which was under Ottoman control in the sixteenth-century, but because Ovid himself was the most outlandish, foreign, and counter-classical poet of Augustan Rome, a poet whose own transgressions (whatever they were) sent him to live out the remainder of his life in exile on the Black Sea. I think early modern poets and playwrights were drawn to Ovid for two reasons: the obvious one is that they were force-fed and absorbed Ovid’s writings in school. The less obvious reason is that his writings represented a wild, boundary-crossing alternative to more balanced writers like Virgil and Horace. For Renaissance English poets, Ovid was their gateway drug to the East.

Was there a conscious effort by poets to reconcile historical models with contemporary experiences? Did the poets draw on each others' works to find and perpetuate new ways to talk about the East?

No, I don’t think there was a conscious effort to reconcile historical models with contemporary experiences in early modern English poetry—quite the opposite, actually! I think early modern poets sought to outdo and to update their classical predecessors. Just as Renaissance drama presents a delightful historical mishmash of periods, styles, genres, and references, so does poetry. Just as Titus Andronicus makes no attempt to be historically accurate, set in an entirely fictional Roman empire, and costumed with a blend of early modern and Roman dress if we base our understanding of it on the Peacham drawing (the only contemporary picture of a scene from a Shakespeare play), so was Renaissance poetry—even poetry imitating Ovid or Museaeus—a hodgepodge of styles, incorporating references to contemporary trade, current events, early modern household design, or hunting practices, into stories set in the mythical or ancient historical past. The Rape of Lucrece describes Lucrece’s bedroom—her embroidery and her gloves—as if it were a late Elizabethan space. In Venus and Adonis, Venus detains the object of her desire, the reluctant Adonis, with the long hunting tale of “Wat the Hare,” a story that belongs to Elizabethan or medieval England, not to Ovid. In fact, Shakespeare deliberately replaces Ovid’s version (Venus’s tale of Atalanta) with his own, very English, sixteenth-century story. In some sense, references to the contemporary East were an excellent way for poets to perform the paradoxical task of both paying homage to, and supplanting, their classical forebears. Though I don’t go this far in the book, a perfect example of this, which my students sometimes find disconcerting, is Milton’s equal attention to classical mythological and contemporary scientific sources for his epic similes in the biblical narrative of Paradise Lost.

As far as Elizabethan poets drawing on one another’s work in their poetry, I see them drawing on classical writers and early modern culture more than on other contemporary early modern writers, specifically. They may have seen themselves as actively engaging in an ongoing conversation with classical poets, in a conversation that seemed at once very much alive (as if these poets were still around), and becoming more and more strange and foreign. One thing I found, which I discuss in the book’s epilogue, is that if these poets weren’t necessarily drawing on one another’s works, other writers and merchants were, later in the seventeenth century. Richard Ligon, who traveled to Barbados in 1647 to make his fortune in the sugar trade, wrote a history of the place and people he encountered. He uses the same Eastern-inflected poetics, very clearly drawn from the poetry of Shakespeare, Marlowe, Donne, and others, to describe the foreign women he encounters.

Miriam Jacobson teaches English at the University of Georgia. Barbarous Antiquity: Reorienting the Past in the Poetry of Early Modern England is available now.