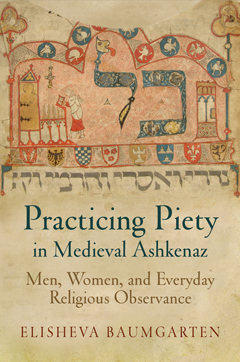 Elisheva Baumgarten is the author of Practicing Piety in Medieval Ashkenaz: Men, Women, and Everyday Religious Observance, which provides a social history of religious practice in context, particularly with regard to the ways Jews and Christians, separately and jointly, treated their male and female members. Medieval Jews often shared practices and beliefs with their Christian neighbors, and numerous notions and norms were appropriated by one community from the other. This depiction of a dynamic interfaith landscape and a diverse representation of believers, Baumgarten offers a fresh assessment of Jewish practice and the shared elements that composed the piety of Jews in relation to their Christian neighbors.

Penn Press: Why do you believe that previous academic texts focused so intently on the complexities of religious belief rather than the social history that impacted Medieval Jewish communities?

Elisheva Baumgarten: I believe that part of the claim was that Jewish history was a history of ideas, rather than a history of a people. This was in part because the history of people was that of countries, and Jews were in the diaspora without a homeland. The creation of the state of Israel (along with many other historical trends) led to a reconsideration of this position. From my perspective, the history of ideas position does not allow anyone but elite men to be part of Jewish history, and this is certainly incorrect from a historical perspective.

Why, in your opinion, was tension between Jews and Christians especially prominent in northern Europe?

This was the result of the close living quarters and the competing beliefs. Each religion also felt attraction to the other’s ideology/life style. For Christian scholars especially, Jews and their history of interpretation posed a challenge theologically; the existence of Jews posed a social and cultural challenge. For Jews the temptation of Christianity on all levels was constant.

Were women exposed, often or at all, to the Jewish writings that were generated during the medieval period?

I think this certainly varied but on the whole women did not actively study many written materials, although they may have been aware of them. In rare cases, they had an intimate knowledge of the texts.

How did the presence of Jewish communities along trade routes affect the passage of information and goods between different peoples?

This certainly quickened the passage of information and knowledge and helped introduce new ideas and spread them. At the same time, local traditions carried much weight.

Was separation between Jewish and Christian communities mostly self-imposed?

Yes and no. Some of it was dictated by social and political arrangements, other parts were self-imposed or self-imagined. One of the central claims of the book is that in some cases, Jews and Christians magnified small differences that existed alongside larger similarities.

In what countries or regions were Jews and Christian found to be the most interconnected?

This is an excellent question and I am not sure what “most” is. Traditionally the Jews of Spain were considered most connected but one must ask how connection is defined. If one constantly positions one’s self as different, this is still a kind of connection.

What specific practices or contexts were required in order for members of the elite to be seen as pious individuals?

I think it was not one specific practice so much as a combination and there were many different combinations. Being learned was certainly a key to piety but so were prayer, fasting, giving charity. Clothing, food and small gestures were also meaningful. In the end the book really looks not only at how one was pious but how one was a respectable (hagun) member of the community, doing some of the many activities available.

Did the rigors of Jewish piety negatively impact the public perception of medieval Jews and Judaism?

I believe most aspects of piety were in fact public and as certain actions became more and more part of common practice, they impacted on the public sphere.