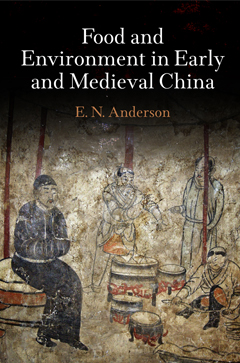 Today's Q&A is with E. N. Anderson, author of Food and Environment in Early and Medieval China. In it, Anderson provides an account of the development of the food systems that coincided with China's emergence as an empire. Before extensive trade and cultural exchange with Europe was established, Chinese farmers and agriculturalists developed systems that used resources in sustainable and efficient ways, permitting intensive and productive techniques to survive over millennia. Fields, gardens, semiwild lands, managed forests, and specialized agricultural landscapes all became part of an integrated network that produced maximum nutrients with minimal input—and can also be a model for moden sustainable agriculture around the world. In this Q&A, Anderson gives us a glimpse into the place food held (and holds) in Chinese culture, as well as pointing to resources for more information.

Penn Press: You cite the strategies of old China and Indonesia as good places to look in order to start adopting change since “the world has run out of agricultural land, and a collapse inward has begun . . . to urbanization and erosion.” Can you elaborate on these strategies? What other immediate, sustainable changes can we make in order to reverse this inward collapse? Or are we already too far gone?

E. N. Anderson: China, southeast Asia, and Indonesia developed ways to produce a great deal of food, sustainably, on very little land, and intensified this over time. Modern-day permaculture and similar agricultural methods have built on this to develop even more productive yet sustainable systems of production. Homegardens, small-scale farms, and some of the organic farming techniques are related and offer hope. Millions of acres worldwide are now under modernized yet intensive and sustainable systems of this kind, and really it is largely the political power of the oil, chemical, and agribusiness companies that stops us from transitioning rapidly to such systems. I have emphasized lessons from China and southeast Asia in my recent book Caring for Place (AltaMira 2014) as well as my earlier The Food of China (Yale University Press 1988).

When explorers and more nonchalant visitors from other countries arrived in ancient China, what farming habits and/or food, if any, did they introduce that definitely took hold?

Not very much. The ancient cases are lost in antiquity. New World crops were introduced by Spanish and Portuguese, later English, but very often by returning Chinese businessmen who had met these crops in the Philippines and other colonies or foreign-influenced countries in southeast Asia (Ping-ti Ho, “The Introduction of American Food Plants into China,” American Anthropologist, 1955). Since the late 19th century, enterprising Chinese farmers have rushed to adopt everything from everywhere, and I have been surprised to see indigenous Maya crops come to east Asia (e.g. pitayas—“dragon fruit” in China now). But almost all the initiative in modern recorded cases has been on the Chinese side.

What ties do you find most strong between food and medicine in ancient China?

This [would require] a book [to answer], or rather many books, and indeed there is a huge literature on it, ranging from Joseph Needham’s Science and Civilisation in China series (several relevant volumes) to Li Shizhen’s Bencao Gangmu of 1593! Suffice it to say that food was never separated from medicine in China, that nutrition has been the most highly regarded branch of medicine since the Zhou Dynasty, and that all modern investigations of Chinese medicine known to me turn up the same initial finding: the first recourse in illness is dietary.

How did religion influence what food people ate in China? How did it influence farming methods and the domestic sphere as a whole?

Another book [needed for this question]. I did cover this in The Food of China (1988) and so did my friend Frederick Simoons in Food in China. China has never had the powerful “thou shalt/thou shalt not” food rules of the western world. Usually, what matters is festival usage: religion provides many festivals, and these have developed specific foodways and food traditions. Much wider, however, is the influence of cosmological and spiritual beliefs on land management, agricultural management, and planning. Spirits of hills and trees were important to traditional farmers and had to be considered, for instance.

Given the unwavering class divide in premodern China, which foods were eaten by the poor and which were eaten by the rich? Were the rich able to partake in a more diverse set of dishes that demonstrated their wealth? How was the general health of each class affected by what they ate?

As elsewhere, the rich got the most highly regarded food, traditionally summarized as “ale and meat,” but including rare vegetable foods, spices, and so on, also. The poor got grain staples, if they were lucky; if they were not so lucky, they got inferior grains, sweet potatoes, and at worst tree bark, weeds, even dirt. China’s history of famines has often been told. Less well known is the fact that in the Ming Dynasty a prince of the blood oversaw the production of an excellent famine foods manual—better than anything I know of today, actually—that allowed local officials to show hungry people what wild plants they could and could not eat.

Was food incorporated into gifts or exchanges between families (on a small scale) or lords of different states (on a larger scale)?

Universally and constantly, as is still the case. Food is even more the lubricant of politics and interaction in China than in other cultures. This is one of the reasons that Chinese cuisine is so elaborate and delicious. You can’t pass off your future in-laws, or your boss, or your neighboring nation with potatoes.

How did gender factor into the production system of food? Which roles were assigned to men and women, respectively? Was age a factor in agriculture? Which farming traditions were passed down from family member to family member?

China was traditionally one of the more gender-unequal societies on earth, especially in the north. It was not as much so as western Asia or parts of South Asia, however. Women of status, after the middle ages, had bound feet and could not work in the fields. They could and did raise silkworms and spin silk, however, and thus contribute their share to the domestic economy. Gender roles assigned major cultivation work to men, most food and fibre preparation to women. This was modeled by the emperor: he was supposed to plow the first furrow in spring, and his principal wife was supposed to raise her own silkworms. This modeling brought good luck to those enterprises throughout the empire. Much agricultural labor was shared, especially in areas where footbinding was not the norm for women. Among the Hakka Chinese and some other groups of southeastern China, men and women worked more or less equally and there was and is little gender difference or discrimination (at least compared to the rest of China). Minority nationalities have their own rules and norms.

Age makes little difference except via ability; older people slowly lose the ability to do heavy work, and become leaders and councillors.

Everything possible was passed down from family member to family member. Individuals would go on to learn from local experts, as needed, but the experts themselves had usually learned from their families. Knowledge was very much a family-transmitted thing, and many families had special, even secret, lore. This did not prevent rapid change, however, because people were under so much pressure from sheer necessity to learn anything new that might increase production and productivity.

E. N. Anderson is Professor Emeritus of Anthropology, University of California, Riverside, and author of numerous books, including Everyone Eats: Understanding Food and Culture. Food and Environment in Early and Medieval China is available now.