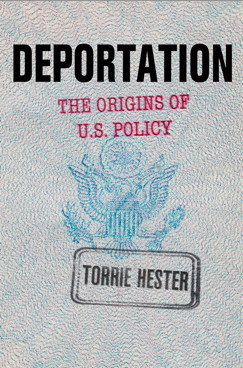 Today we have a guest post from Torrie Hester, who teaches at Saint Louis University and is the author of the new book Deportation. Deportation covers the uncertain beginnings of American deportation policy. Before 1882, the U.S. federal government had never formally deported anyone, but that year an act of Congress made Chinese workers the first group of immigrants eligible for deportation. Over the next forty years, lawmakers and judges expanded deportable categories to include prostitutes, anarchists, the sick, and various kinds of criminals. As Hester demonstrates in today's incisive post, this history shaped the policy options U.S. citizens continue to live with into the present, as immigration remains as charged an issue as ever in American politics.

Since taking office, President Donald Trump has been working toward a massive build-up of immigration enforcement, not just in the form of a wall along the nation’s southern border, but in terms of policing in the interior of the country. In addition to requesting the hiring of thousands of new immigration officers and expanding a program in which local police enforce immigration laws, he has even promised the expansion of civil fines and penalties that can apply to anyone—including U.S. citizens. We have not yet seen what Trump’s fines and penalties might be, but a glimpse came in his January 25, 2017 “Executive Order Enhancing Public Safety in the Interior of the United States.” Some worry these could resemble an early version of Arizona’s SB1070 of 2010, which, as drafted, included misdemeanors that carried fines of $2,500 and up to six months in jail for people who help an undocumented immigrant. The administration’s calls to expand immigration-related policing throughout the country brings to mind a legal case from 100 years ago. That case, which involved prostitution charges in Illinois, took place in another moment in our national history when the federal government was expanding its ability to punish people, including U.S. citizens, under immigration law.

Back in 1909, police in Chicago arrested two men, Joseph Keller and Louis Ullman, for “harboring an alien prostitute,” a woman named Irene Bodi. Bodi had emigrated to the United States from Hungary in 1905 and begun working as a prostitute two years later in a brothel owned by Keller and Ullman. Since it was illegal to run a brothel, police charged the two men for violating state criminal law. In a move that could be similar to where the Trump administration hopes to take federal law today, immigration authorities charged them with a then relatively new and vague crime—something called indirect inducement. Indirect inducement was a crime created by lawmakers to hold brothel owners responsible for an unlawful immigration of a sex worker. Under this charge, it didn’t matter that Keller and Ullman had not known Bodi when she initially immigrated. What mattered was that she was working for them in 1909, after she arrived. If found guilty of this immigration-related crime, Ullman and Keller could face jail for between one to five years and a fine of up to $5,000, on top of the state criminal conviction.

After a local jury found them guilty as charged, Keller and Ullman appealed their conviction on the immigration-related charges all the way to the Supreme Court. The Court agreed with one part of Keller and Ullman’s defense, holding that the government did not possess a sweeping ability to punish people under immigration law who hadn’t known the immigrant when she or he immigrated. Most of the Court’s decision, however, answered a larger constitutional question of whether the government could punish people, including U.S. citizens, under immigration law at all. As the Court saw it, Keller and Ullman’s conviction represented a stunning expansion of federal power. According to Justice David Josiah Brewer the criminal sanctions were “broad enough to take cognizance of all dealings of citizens with aliens.” If upheld, the Court believed that the case would lead to “such a change in the internal conditions of this country as was never dreamed of by the framers of the Constitution.” The larger constitutional question, therefore, addressed more than just the government’s power to punish. Instead, the question, as the Court understood it, was actually, “can it be within the power of Congress to control all the dealings of our citizens with resident aliens?”

A century later, the issues at the heart of this 1909 case raise have reemerged, raising important questions about where the Trump administration wants to take the country. Ullman and Keller were prosecuted under Illinois law and faced criminal convictions for their role in the sex trade, but they didn’t spend time in jail for the immigration related crime because the Supreme Court overturned that part of their conviction. Since then, Congress has passed a wide range of criminal and civil offenses tied to immigration policy, including sanctions against employers and anti-smuggling provisions. So far, however, lawmakers have not rebuilt the broad, sweeping power that worried the Supreme Court in 1909, and which it struck down. The country now faces a very similar question—how sweeping should the power of federal immigration authorities to arrest people for interacting with immigrants be? The unprecedented numbers of law enforcement in the country, real problems of racial profiling, the demographics of mixed-status families, and the sheer scale of the capacity for surveillance in the twenty-first century make this question more pressing in 2017 than it was a century ago.