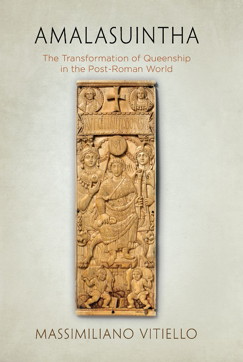 Today, we have a guest post from Massimiliano Vitiello, Associate Professor of Ancient History and Late Antiquity at the University of Missouri-Kansas City and author of Amalasuintha: The Transformation of Queenship in the Post-Roman World. In this book, Vitiello situates the life and career of the Ostrogothic queen Amalasuintha (c. 494/5-535), daughter of Theoderic the Great, in the context of the transitional time, after the fall of Rome, during which new dynastic regimes were experimenting with various forms of political legitimation. Today's post provides an overview of the life and times of this fascinating figure.

Fifteen hundred years ago, the Gothic queen Amalasuintha struggled to develop a political model that would allow a barbarian woman to rule in her own right. Her remarkable political experiment stands out for its parallels to other women of the ancient world, in particular empresses of the Late Roman Empire such as Galla Placidia and Ariadne—who, even if they did not break conventional molds, still exerted their influence in the international sphere. But Amalasuintha faced a considerably different world than those Late Roman and Byzantine empresses, and her political experiment also stands out for its unique cultural context.

Amalasuintha, daughter of Theoderic, ruled after her father’s death as a regent for her teenage son Athalaric at a court that was deeply divided. The conservative Gothic aristocracy, proud of their own military traditions and largely uninterested in embracing Roman culture, had no precedent for a ruling female at this level. Gothic tradition assigned the wife of a king a role as advisor to her husband. Queens could also be instruments of diplomacy if their marriage were meant to reinforce alliances and to promote peace, but the Goths certainly did not recognize queens as rulers with independent political power over their kingdoms. The Romans, however, had experienced during the fifth century the influence of imperial women and mother regents. Roman history offered antecedents for female political power in situations where there was no adult king. Many Roman subjects, particularly members of the Italic aristocracy or of the Roman Senate, disdained a Gothic culture that seemed to them inferior. They welcomed Amalasuintha’s regency, perhaps understanding it in light of the legacy of powerful Byzantine empresses. But in the Italy of the two peoples, this experiment was something very new, and Amalasuintha­­, a Gothic queen with a Roman education, belonged to both worlds, and to neither.

Amalasuintha emerges as a remarkable figure facing impossible odds. To keep intact her father’s kingdom, to rule an Italy torn with internal divisions, to protect Italy from predatory and powerful neighbors like the Franks and the Byzantine Empire—all of this rested on the shoulders of Amalasuintha. It would have been a difficult line for anyone to walk, and Amalasuintha walked it more or less alone, reinventing her political position as she went. After her son died prematurely, Amalasuintha arrived at an unprecedented solution: she raised her male cousin to the throne as an unmarried consort in an effort to give her reign legitimacy in the eyes of her Gothic subjects. Yet she did not release the reins of power, relegating him to a secondary position and presenting herself as the primary figure of the co-regency. The sources describe this experiment with fascinating gendered language, in which they attribute male aspects to Amalasuintha and female characteristics to her cousin and co-regent Theodahad.

Perhaps the experiment was too radical for her time. The co-regency was short lived and unsuccessful: Amalasuintha’s plans and hopes ended in betrayal and isolation—and ultimately death. Her effort to navigate treacherous waters inside her divided and threatened kingdom, and to bridge two worlds that perhaps had little interest in being unified, failed completely, and her kingdom collapsed into war. After her assassination, Roman and Gothic subjects were left to face the disastrous invasion of the Byzantine emperor Justinian, whose machinations had added to the tension of the Gothic kingdom for some time, and probably aided in the failure of its highest court. In the end, the Amalasuintha’s experience is perhaps also a cautionary tale about the ways internal divisions create vulnerabilities on the international stage, and a reminder that a house divided cannot stand.

As the first generation of the barbarian ruling house born in the Gothic kingdom of Italy, Amalasuintha was part of the long, violent process of integration and acculturation that would eventually lead to the medieval ideas of queenship. The evolution of female power is evident in Frankish and Lombard examples like Brunhild and Theodolinda, who postdated Amalasuintha by only a few generations, but who exercised significant power at the barbarian courts, where they ruled with the consent of their peoples’ aristocracies. Her fascinating and tragic story reminds us that it takes time for new ideas to gain acceptance. It shows also that even when some elements of societies are strongly resistant to change, sometimes change is really part of an ongoing and unstoppable process of transformation. In the new societies that arose as the synthesis between barbarian and Roman cultures, Amalasuintha and other women of her century opened the door for the development of queenship that would shape Medieval Europe.