This blog post comes from Penn Press's Direct Mail and Advertising Manager, Tracy Kellmer, and continues a series, the Afternoon Coffee Break, in which Tracy shares her reflections and observations about a different Penn Press book that she has read. Read on and enjoy!

Just about every weekday afternoon you’ll find me at a coffee shop drinking a latte and reading a Penn Press book. There are many good reasons for wanting to work at a scholarly press, but my favorite one is that I get to read the books. I am not a scholar, and this is not a review. 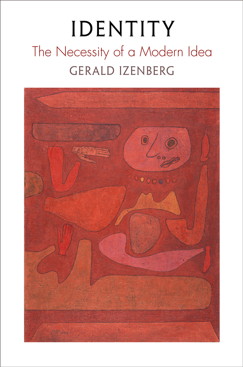 Why I picked it:

Everyone talks about identity, and we all assume we know what we mean when we use the word identity. I personally obsess about my identity, because I think “having an identity” might help me make sense of the changes I have made in my life: from growing up in a rural setting to choosing to live in South Philadelphia as an adult; from first-generation college student to finishing a Ph.D., from fundamentalist to existentialist, you get the idea. And I know I’m not alone: Jennifer Lopez feels the need to claim to everyone, “don’t be fooled by the rocks that I got, I’m still, I’m still Jenny from the block,” while David Byrne asks, like a lot of us I’m sure, “how did I get here?” But clearly, identity can and does change and depends on more than just how I think of myself: it depends on what others think of me, too. So I wanted to read Gerald Izenberg’s book because I wanted to better understand how the concept of identity came to be, and why it continues to be so important.

I discovered that you need an awful lot of pages to describe the history of a concept that hasn’t been around all that long. Apparently, for most of human existence, the “self”—although its nature could be disputed—was all that anyone needed to get through life and to feel like a consistently recognizable person. Because the categories surrounding oneself, such as nation, gender, religion, or lot in life, were pretty much determined before you were born, and stayed stable throughout most of your life, who you were, and were going to be, was pretty much predestined and not worth losing sleep over.

However, after the industrial revolution and the first World War, the things that were taken for granted, such as nation, gender, religion, or lot in life, felt suddenly to be in flux. Improvements in communication and transportation technologies and new ideas such as existentialism and psychoanalysis, contributed to the feeling that perhaps what one was, was less fixed than originally thought. Over time, these feelings and doubts about the cohesiveness of the self were intensified by changing demographics and social mobility: no longer could you tell what nation or class someone belonged to just by looking at them.

The concept of the self became inadequate when the self couldn’t meet a person’s need to belong—for example, to a nation, a gender, a religion, or a class—when these previously unquestioned categories of belonging became options to choose between, not a foregone conclusion. A self may have been static and unchanging, but the concept of identity liberated a person not only to become something other than what they were born into, but also to change depending on who they were with or what group they belonged to at any given moment in time. So although “identity” may only be about one hundred years old, our contemporary existence would be impossible without it.

Gerald Izenberg is a historian, who using the tools of his discipline, narrates a grand story of a concept. He looks at how identity may have been expressed, or used, by literature, philosophy, psychology, anthropology, sociology, political activism, and public policy. I loved seeing the ways in which each discipline brought their own approaches and methodologies to bear on the concept of identity, and the ways in which each discipline was able to turn identity into a tool to solve a problem. By showing how each discipline does what it does, and the unique contribution that each discipline made, Izenberg, though it was not his intention, made a great case for the influence of all of the humanities and social sciences on humanity’s journey through time.