This blog post comes from Penn Press’s Direct Mail and Advertising Manager, Tracy Kellmer, and continues a series, the Afternoon Coffee Break, in which Tracy shares her reflections and observations about a different Penn Press book that she has read. Read on and enjoy!

Just about every weekday afternoon you’ll find me at a coffee shop drinking a latte and reading a Penn Press book. There are many good reasons for wanting to work at a scholarly press, but my favorite one is that I get to read the books. I am not a scholar, and this is not a review. 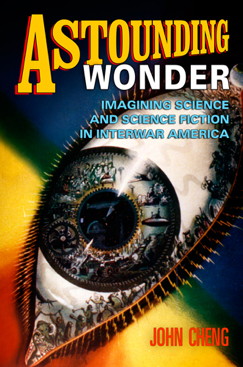 Why I picked it:

Alastair Reynolds, Neal Stephenson, and Charles Stross are some of my favorite science fiction writers, and their books are classified as “hard” science fiction. According to Wikipedia, the term was first used in print in 1957 and refers to fiction that is “characterized by an emphasis on scientific accuracy or technical detail or both.” When history editor Bob Lockhart told me there was a Penn Press book about pulp magazines in the 1930s and the development of science fiction as the genre we know and love, I was intrigued.

John Cheng shares the voices of these fans, printing excerpts from the letters they wrote and sent to the magazines, where they were published in “community” and “letters to the editor” sections. In the letters, fans, sometimes writing in the guise of a persona to veil their true identities, would comment on the plausibility of the science of a proffered fictional world, demonstrate their intellectual prowess by proving mathematical theorems and drawing technical specifications, comment on their favorite characters and authors, and state their preferences for more action-oriented or character-driven stories.

But their engagement wasn’t limited to the virtual, text-based space of the magazine. The magazines would print the letter-writers’ home addresses, and many meet-ups in the “real world” would occur as a result. Fans established clubs complete with charters, badges and fanzines. In 1939 the first costumed fan attended a “world” sci-fi convention in New York City. Amateur rocket societies actually built and tested rockets and shared their progress and results with not only other fans, but also university- and government-sponsored researchers. Some fans even credited their passion for science fiction for their decisions to pursue degrees in science fields. And, perhaps not surprisingly, many fans became authors and editors themselves, some of whom are still widely read and recognized today: Isaac Asimov, Arthur C. Clarke, Ray Bradbury, and Robert Heinlein.

These early science fiction fans were women as well as men, children as well as adults, and international as well as American. The book makes it clear that the highly invested and engaged fans were as instrumental to the development of the genre as the pulp magazines. It’s easy to see how contemporary fandom, with its online message boards and real-world conventions and cosplayers (costumed players), descended from these early fans and how fandom is intrinsic to the DNA of science fiction.

Cheng devotes a chapter to Einstein’s theory of relativity and its effect on the fans’ embrace, understanding, or skepticism of time as something that could be travelled like space. In their letters, they commented on the feasibility of the science that propelled “fourth-dimension” plots. Other chapters explored advancements in technology, considerations of racial difference, and the changing roles of women in society, showing how these real-world developments impacted the reading and writing of science fiction, from the characterization of heroes and villians to the imagined romantic dangers of the future.