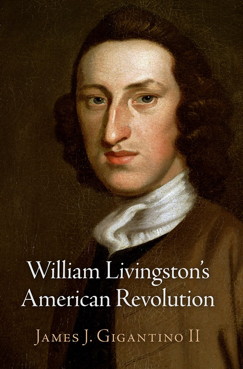 Today we have a guest post from James J. Gigantino II, Associate Professor of History at the University of Arkansas and author of the new book William Livingston's American Revolution. Gigantino's book explores the largely untold story of New Jersey's first governor—how he experienced the American Revolution and managed a state government on the war's front lines. In today's post, he introduces Livingston and ponders how and why figures like him have fallen from the mythos we embrace around America's Founding Fathers.

In November 1783—235 years ago this month—the last British troops evacuated New York City, marking the end of the American Revolution and seven years of British occupation. The iconic Evacuation Day lithograph produced in the late nineteenth century depicts Washington’s triumphal ride into New York City on November 25, casting him as the central player in New York’s liberation and, by extension, in the entire war. By this time, of course, Washington held a godlike status among Americans as the hero of the Revolution and father of the nation. Supporting characters—Franklin, Adams, Jefferson, Madison—became the mythical Founding Fathers that schoolchildren still learn about today. But each of these men held high political or military offices in the federal government—what of the average American politician of the revolutionary era? Where does he fit into the mythos of Founding Fatherdom?

William Livingston’s American Revolution explores this question by examining the role of the forgotten founding fathers, the middle managers who worked on the ground to actually get things done. They rooted out loyalists, raised militia units, battled recalcitrant legislators, and secured needed supplies to help Washington’s army succeed. Livingston, born into a well-established New York political dynasty, served as the principal conduit between the local wartime situation in New Jersey and the national demands placed on the states. The first biography of Livingston published since the 1830s, William Livingston’s American Revolution is as much about the position of governor as about the man himself. Livingston’s service as a member of the First & Second Continental Congress, a general in the New Jersey state militia, governor from 1775-1790, and as a delegate to the Constitutional Convention sheds light on the diverse nature of the Revolution. By remembering this forgotten founder, historians can better understand the choices moderates like him made in supporting the Revolution, the wartime bureaucrats across the country charged with administering it, the constant battle over loyalty on the home front, and the limits of patriot governance under fire.

Without middle managers like Livingston, American victory would not have been possible. Livingston astutely understood this; he mainly spent his time as governor—when he was not hiding out from British marauders bent on cashing in on the bounty placed on his head (or his oversized nose and ears)—rallying an otherwise uninterested population to fight a war that even he had believed would be an uphill battle to win. Ejected by his fellow revolutionaries from the Second Continental Congress in June 1776 because he promised to vote against the Declaration of Independence without a firm offer of European military support, Livingston found himself very much a reluctant revolutionary. Pushed into the governor’s seat because of his pre-war fame as a writer, propagandist, and satirist for his New York political kin, Livingston worked his political connections in New Jersey to mobilize disinterested militiamen and destroy webs of loyalist infiltration.

To accomplish this, Livingston conducted various political campaigns that flew in the face of the Whiggish values of democracy and rule by the people that grounded the revolutionary movement. Livingston, like many other revolutionary elites, believed “the people” were inherently selfish and untrustworthy, and that pure republican men like him had to lead the way forward if the Revolution had any chance of victory. He therefore centralized much of the state’s revolutionary government and directed the state’s military, civil, and judicial operations along with a small but trusted cadre of allies. Battles with state legislators, of course, ensued. Few New Jerseyans wanted their politicians mandating that they share more of the war’s burdens. This centralization effort and the lack of interest in shared suffering for the greater good motivated Livingston to align with James Madison and others at the Constitutional Convention who hoped to limit the power of the people in the new federal government and ensure that republican men like Livingston would become the new vanguard of the post-revolutionary America.

New Yorkers celebrated Evacuation Day for over a century, with it rivaling the patriotism and celebrations honoring military heroism on Independence Day. Just as few New Jerseyans know about William Livingston, few New Yorkers today know the significance of November 25. The growing popularity of Thanksgiving after the Civil War and the World War I alliance with Great Britain led 1916 to be the last officially commemorated Evacuation Day. In the past decade, various groups have begun to celebrate November 25 again, with part of Bowling Green in Lower Manhattan (which hosts the famous Charging Bull statue) even being renamed Evacuation Day Plaza. Just as the Sons of the American Revolution and other groups have hoped to educate New Yorkers on the importance of Evacuation Day, William Livingston’s American Revolution hopes to reinvigorate understanding of how middle managers like Livingston prosecuted the Revolution and made Evacuation Day possible in the first place.