This week’s featured creature from John H. Rappole’s Wildlife of the Mid-Atlantic, the Roseate Tern (Sterna dougallii), will occasionally grace the mid-Atlantic coastal states between May and July. This bird gets its colorful name from a summer color change. During the warmer breeding months, its black bill turns red and is white underparts become rosy. 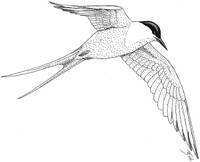 A distinctive call sets the Roseate Tern apart from other Terns (such as the Common Tern and the Arctic Tern, also covered in Wildlife of the Mid-Atlantic). Some describe the Roseate Tern’s call as a "soft chewick." Some say it is a two-noted ‘chi,vik’ or ‘ki,rik.’" "A very characteristic chuwit" says Wikipedia.

Listen to this recording from the Cornell Lab of Ornithology and decide for yourself.

Wildlife of the Mid-Atlantic: A Complete Reference Manual is scheduled for release in mid July. John H. Rappole is a Research Scientist at the Smithsonian National Zoological Park’s Conservation and Research Center. He is the author of twelve books, including Birds of the Mid-Atlantic Region and The Ecology of Migrant Birds.