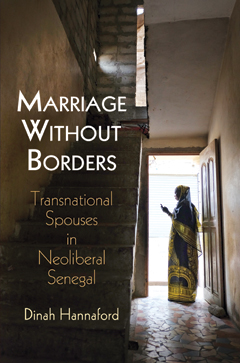 Today, we have a guest post from Dinah Hannaford, who teaches international studies at Texas A&M University and is the author of the new book Marriage Without Borders: Transnational Spouses in Neoliberal Senegal. Based on ten years of ethnographic research in both Europe and Senegal, Marriage Without Borders examines a particular social outcome of economic globalization: transnational marriages between Senegalese migrant men living in Europe and women at home in Senegal. Hannaford connects these Senegalese transnational marriages to the broader pattern of flexible kinship arrangements emerging across the global south. In today's post, Hannaford examines the plight of asylum seekers through the insightful lens of her research and scholarship.

This year has seen a remarkable increase in asylum seekers arriving by boat on European shores. By the time of this writing, arrivals in Spain for the year have already tripled the totals for all of 2016. Italian authorities are expecting an increase in last year’s record number of 181,000 migrant arrivals by boat. Fears of “invasion” and concerns about cultural dissolution animate political election rhetoric in many European nations.

This increase in the number of boat arrivals comes despite continued and new efforts to halt them. The borders of Europe are being pushed further south as the Europe Union funds (often violent and abusive) border control programs in countries like Morocco, Libya, and Sudan. European nations have signed bilateral agreements with sending nations, as well as “third countries” or “transit countries,” that lay out strategies to stop trafficking and discourage emigration. Italy has poured resources into closing the sea trafficking routes. The IOM and other organizations have launched expensive informational campaigns warning of the dangers of attempting the crossing by land and by sea. Why have these efforts produced so little in terms of results?

The guiding misconception among all of these approaches to curb clandestine migration is that if the route becomes more difficult and more dangerous, would-be migrants will no longer wish to migrate. This assumption miscalculates the degree to which migration to Europe figures in the social imaginary of the sending countries. Migrants knowingly undertake the hardship and danger because, as my own ethnographic work shows, the motivations to migrate are profound—though in ways that are often misconstrued by politicians and development workers as frivolous.

Senegal is one of the West African nations whose citizens number among the sojourners through the desert and across the sea. Senegal is, by most measures, a politically stable and peaceful country. Since gaining independence from France, Senegal has been ruled democratically with uncontested transfers of power. There has never been widespread civil war in Senegal, nor has a dictator ever ruled over its people. So why are Senegalese so prevalent among the desperate masses risking death to enter Europe?

The answer is a familiar story across the world in this era of neoliberal capitalism. While the rich get richer, the poor are finding it harder and harder to make ends meet. In Senegal, numerous factors—including the fallout of colonial exploitation, ruinous postcolonial economic policy imposed by the IMF and World Bank, and environmental problems such as drought and overfishing—have collectively impeded all but the elite from pursuing the milestones of socially successful adulthood. Young men in particular feel blocked from finding remunerative work, from saving the funds to marry and support a family, from supporting aging parents, and from becoming a generous member of extended family and social networks.

Meanwhile, since the mid-1980s, a culture of migration has arisen in which people equate the very visible signs of wealth in Senegal—from luxury cars to new villas—with an abstract concept of access to overseas. No clear relation between wealth and particular trajectories of education or job training exist; wealth seems to come from abroad, so most Senegalese make the logical jump that to be abroad is to have money. Though economic opportunities do exist abroad, this equation of life abroad with automatic and infinite wealth functions as a powerful myth that drives many Senegalese to pursue migration at any cost. Though the high rates of emigration suggest that people are desperate to get away from their lives in Senegal, my research reveals most are migrating in the hopes of improving their lives in Senegal, not escaping them. The dream is to go abroad, make tons of money, and return to lead a socially successful life in Senegal. Young Senegalese people who are financially and socially stuck view getting abroad as the only option for making meaningful lives.

The European focus on discouraging migration thus far has been policing borders and closing clandestine migration routes. As we have repeatedly witnessed, however, when individual clandestine pathways to Europe are closed, others open. When the water route between West Africa and the Canary islands became subject to increased monitoring by European coastal patrols, West Africans began traversing across the Sahel to North Africa to board boats for Europe. The journey takes longer, is more expensive and subjects migrants to increased endangerment, and yet many thousands pursue it. Twenty-first century hypermobility guarantees that new paths will be forged by the desperate. See, for example, UNHCR reports that in addition to sub-Saharan Africans, high numbers of desperate Bangladeshis are among those departing from Libya and arriving on Sicilian shores. Closing certain points of access won’t make the problem go away, but it will subject migrants to further dangers and vulnerabilities in making the journey.

The IOM and other organizations fill their informational campaigns against clandestine migration with testimonials from real migrants who have made the journey through the Sahel and across the Mediterranean. They have no shortage of shocking, harrowing material—the conditions that migrants to Europe suffer in transit countries like Libya, Morocco, and Algeria at the hands of police, smugglers and opportunist criminals are nightmarish. The journey across the desert itself leaves migrants vulnerable to kidnapping, extortion and exploitation. Most migrants run out of money at multiple points along their journey and must ask friends and family at home or abroad for more funds. Many report watching their travel companions die in front of them at some point along the way.

Despite this compelling material, information campaigns rarely deliver effective deterrence.  What the IOM and others fail to understand is that this need to lead a socially successful life is just as critical as access to food and safety. The campaigns show migrants recounting their traumatic voyages across the Sahel and across the Mediterranean in the hope that those watching will decide their lives are not so pitiful as to risk losing by undertaking the journey. But would-be migrants already know that threat and peril are associated with the journey. As Senegalese sociologist Papa Demba Fall once put it, for these migrants, social death is worse than physical death. They understand that they will risk even the end of their lives as they endeavor to get to the place that will allow their lives to truly begin.

My newer ethnographic research with West Africans asylum-seekers in Italy reveals a key irony: once migrants arrive in Europe, they see that their dreams of its potentials for quick and easy riches were misplaced. They are disillusioned and disappointed with the realities of Europe, and yet by then it is too late because they have risked their lives over and over again to get there. They have spent all their money and other people’s money on the journey. They have no choice but to remain. What the EU misses with its attempts to shut down borders, migration routes, and access to Europe is that they are only increasing the chances that migrants who do reach Europe illegally will stay. What if there were more legal opportunities to enter Europe instead of fewer? What if one could enter Europe to evaluate its opportunities without the pressures of immense debts both financial and personal? Hypermobility and income inequality will continue to be mainstays of the twenty-first century. Politicians need to understand that closing borders does not deter those who yearn for a better life—it merely makes their journeys more dangerous and more permanent.