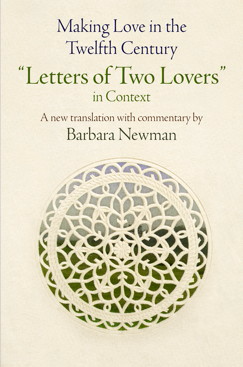 Penn Press is thrilled to share a guest post from Barbara Newman, John Evans Professor of Latin Language and Literature at Northwestern University and author of (among many books) Making Love in the Twelfth Century, which offers a new translation of the Letters of Two Lovers along with a full commentary and two extended essays that parse this important text’s literary and intellectual contexts and chart the course of the doomed affair documented therein.

Have you ever written a love letter?

Sexting doesn’t count. Neither do text messages with clever emojis, or even email. No, I mean a real letter—written with ink on scented paper, folded into an envelope, sealed with a kiss.

Anyone under fifty may find this concept strange. Yet if you were ransacking your grandmother’s attic after her death and stumbled on a packet of letters from your grandfather, bound with a frayed pink ribbon—wouldn’t you feel that a treasure had fallen into your hands? Imagine the brittle paper and faded ink, blotted here and there with tears. The language is quaint, more flowery than anything we would write today, but that only adds to their charm. If you found one postmarked Normandy, 1944, wouldn’t your eyes be moist before you even opened it? Nina Sankovitch’s lovely book, Signed, Sealed, Delivered, celebrates the mystique of letter writing in a more leisured age. Part of that mystique, she reminds us, lay in the waiting. Weeks might pass as a letter flitted slowly across land or sea, and the anxiety of anticipation heightened the joy of a longed-for reply.

Now imagine a packet of love letters penned centuries earlier. Finding such a treasure trove was the good fortune of a monk named Johannes de Vepria, or Jean de Voivre, around 1470. He was a librarian at Clairvaux, the great Cistercian monastery, whose abbot had asked him to catalogue its books. Like other humanists of his day, Jean loved exquisite literary Latin, and he was compiling an anthology on the art of letter writing. The ars dictaminis, as medieval teachers called it, was a leading branch of rhetoric. Letters were prized as much for their eloquence and panache as for what they communicated. Jean had already copied letters from church fathers and famous rhetoricians, suppressing their mundane details and highlighting the purple passages, so his textbook could provide writers with models of style. At the very end, perhaps as an afterthought, he added some excerpts Ex epistolis duorum amantium—“from the letters of two lovers.”

Who were these lovers? They don’t tell us, and Jean himself probably had no idea. By their nature, love letters are secret; writers don’t sign their names or risk exposing their beloveds to shame. But we do know that the letters Jean found predate his own age. Their Latin style—the elegant but heavy rhyming prose, the leonine verse, the range of literary allusions—identifies them as a product of the early twelfth century. Their mere existence is a fluke, for almost no private correspondence from the Middle Ages survives—let alone a collection like this, with more than a hundred letters and fragments. But the sheer chance of history must have been aided by conscious design. These letters come down to us because someone took pains to preserve them, copying both the man’s and the woman’s and stowing them in the safest place she could find. (If you want to know why I think it was the woman who saved them, read the book.) However this packet of letters came to Clairvaux, or wherever Jean found it, we can imagine the monk stumbling on his wondrous discovery with joy, perusing the same brittle parchment and faded ink that I imagined in your grandmother’s attic. What better—or more mysterious—coda could he have added to his textbook on letter writing?

“To her heart’s beloved, fragrant above all perfumes, from her who is his in heart and body: when the bloom of your youth has faded, may yours be the freshness of eternal bliss.” So begins the woman’s first letter. Jean must have been hooked at once. But he did not copy the whole correspondence, for it was style rather than content that captivated him. So, maddeningly, he followed his usual practice and excised any names or concrete details that might have helped us identify the writers. Careful scribe that he was, he signaled all his omissions. But as he continued copying, he seems to have become more engrossed, preserving more complete letters and fewer fragments. Thus we can watch a love affair unfold before our eyes, and a stormy affair it was. Passionately devoted to each other, these learned lovers both think they have never met anyone so brilliant. The woman had come to know the man as her teacher, and he was already a kind of celebrity. She feels sure that before long “the mountaintops [will] bow down” to his genius. He in turn calls her “the only disciple of philosophy among all the girls of our age” and wishes that she may “advance ever higher—if she who has attained the summit can advance.”

Yet the lovers, predictably, are soon discovered and parted. As the dreary months roll by with no meetings, their letters are forced to bear more and more of the weight of their passion. Though they both swear eternal fidelity, the woman feels abandoned, for she is convinced that her lover could visit if he really cared. Quarrels ensue; angry reproaches alternate with high-minded avowals. It doesn’t help that some letters are out of order and, apart from Jean’s abridgments, a few may be missing entirely. So piecing the lovers’ story together is a speculative project. Since we can never be quite sure what happened, we cannot tell how far their rhetoric responds to events and how far they were deliberately striving for effect. Both of them, it seems, self-consciously aspired to a love that would endure for the ages. “With God as my witness,” writes the woman, “I love you with a sublime and exceptional love. Hence there neither is nor shall be anything or any fate that can separate me from your love, save death alone.” In the same vein the man promises, “This is how our love will become immortal: if each of us strives to surpass the other in a friendly, joyful competition; and let neither of us consent to be outdone by the other.”

Had Jean de Voivre in fact rediscovered The Lost Love Letters of Heloise and Abelard? In a 1999 book by that title, Constant Mews argued vigorously that he had. His book unleashed a firestorm of controversy that remains unresolved, so Making Love in the Twelfth Century revisits the evidence pro and con. At the same time it reads this remarkable correspondence in light of other twelfth-century letters, poems, and teacher-student exchanges, asking what these lovers can teach us about the history of emotions. Nowadays we try to maintain tight boundaries between pedagogy and romance. But nine hundred years ago, learning to write Latin meant imitating Ovid, the magister amoris—so teachers of grammar found themselves also teaching the art of love. The world was different then. Come and visit—and if you find yourself tempted (just this once) to exchange your smartphone for a quill pen, it’s never too late.