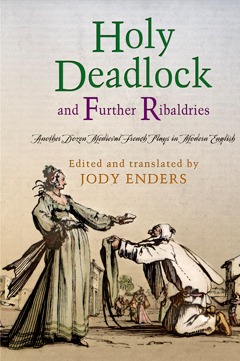 Today we have an exciting guest post from Jody Enders, kickstarting a four-part series elaborating her theory of translation. Enders is Distinguished Professor of French at the University of California, Santa Barbara, and she’s also the editor and translator of two of Penn Press’s most unique and fun books of recent years: the just-out “Holy Deadlock” and Further Ribaldries and 2011’s “The Farce of the Fart” and Other Ribaldries. Both of these volumes bring the surprising sauciness of fifteenth- and sixteenth-century French humor into modern English. The two dozen bawdy plays collected in these books come complete with detailed information about each play’s history and in-depth directions for actors, directors, and dramaturges, making these medieval farces performance-ready for today’s theater. In this post, Enders examines some of the key challenges involved behind her process of bringing these plays into an uncensored American vernacular. Read on for a thrilling survey of the theoretical ideas, changing historical contexts, and practical concerns that spring up in the process of translating and staging these works, and be sure to return in three months for Part 2!

Here’s the thing about theater, be it Greco-Roman, medieval, Shakespearean, modern, even postmodern. Theater is always a translation. From the Latin traducere, “to translate” means “to lead across” from one language to another. But, in the Middle French of the fifteenth and sixteenth centuries, one can also traduire or “hand over” an alleged criminal to the authorities. And one can traduire or “betray” (through a glance, an involuntary movement, a sound) that which one might wish to conceal, such that one’s true thoughts, feelings, and attitudes are “belied” or “betrayed.” Betrayal belongs to the very philology of translation. But it also belongs to the theater and to the universe of early French farce. While bursting at the seams with sexism and misogyny, that repertoire nonetheless invites us to turn that betrayal to our advantage.

There are over 200 late-medieval French farces extant and, even though barely 35 have been translated into English, they have an awful lot to say and do about the pleasures and pains of any society. If only the Middle French could be rendered in stage-friendly English for actors, students, teachers, comedy lovers, and regular people! (Farce was nothing if not for regular people.) But there’s the rub. The satirical humor is so obscene, so over-the-top politically incorrect that, oftentimes, it’s no longer friendly to the stage at all. “Seriously,” I often say to myself when consulting the most staid of philological sources, “did I really just read the Middle French word for ‘hoo-ha?’” Note to self: I did.

Contemporary readers often find the base texts of farce—and I do mean base texts—obscene, abhorrent, or, aesthetically, the worst case scenario for farce—unfunny. But nothing is more site-specific and literally “time-sensitive” than the cultural politics of humor, especially on stage. One fine day, a joke is no longer funny because of an unplanned resemblance to a contemporaneous catastrophe: a Three-Stooges-like beating isn’t so amusing when you’re suffering from your husband’s most recent assault. Alternatively, the solemn morphs just as readily into the comical: the Virgin Mary’s crown falls off during her dramatic entrance at the denouement of the holiest of miracle plays—I’ve actually seen that happen—and the audience erupts with unholy laughter. The unspoken changes the spoken; and performance changes everything. It can and it should. By creating interpolated stage directions without doing violence to philology, the feminist translator can betray all the misogyny and even reverse the polarities of gendered stereotypes. She can tap into all that virtuality and potentiality to turn theater’s visual, corporeal, verbal, and even sonic signs of agony to her advantage. Maybe the “Basochiens,” the upwardly mobile medieval lawyers and lawyers-in-training who authored and performed medieval French farce, would be rolling over in their graves if they could know what a twentieth-century American woman would make of their work. But they should have known because it’s theater. When performance finds anew what has been lost in translation and lost to history, we can make, unmake, and remake the question of whether it ought to stay lost or be refound.

On Thursday, May 11, at 8:00 p.m. at the Gilmore Theater Complex on the campus of Western Michigan University, the Radford University Players will perform one of my translations: Cooch E. Whippet, or, The Farce of Martin of Cambray) from my Farce of the Fart and Other Ribaldries. So I find myself wondering anew about interpretation, enactment, and betrayal. What will actors producers, directors, and dramaturges have made of my translation? And what will audiences make of their own translation of it for the stage? The Radford Players will doubtless have encountered many of the challenges I did when confronting on-stage domestic violence. But perhaps the thorniest dramaturgical problem I’ve ever encountered transcends even gender studies to speak more generally to the human. Such is the case for one of the new plays in Holy Deadlock and Further Ribaldries: a play whose central prop threatens the play’s very postmedieval survival. 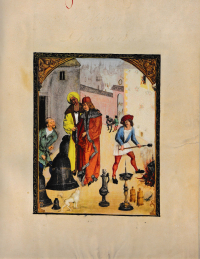 In Extreme Husband Makeover (La Farce des femmes qui font refondre leurs maris), two wives who are sexually frustrated by their aged, impotent, yet seemingly solicitous husbands, arrange for a makeover from a very particular craftsman: a bell- maker or fondeur de cloches. What can I say? Thank you, Stephen Greenblatt: this is self-fashioning as bell-fashioning. After some exquisite passages so lyrical that we can scarcely believe we’re in farce, including the Bell-Maker’s Pilate-like warnings of “beware: a change in age means a change in ways,” the metamorphosis results in younger, virile husbands who are also violent abusers. This is farce at its self-conscious best. In fact, the special genius of farce is to be both supremely literal and supremely symbolic at the same time; its alchemy melds symbolic literalism and literal symbolism. In this case, however, the challenge lay not with the symbol but with the reality to be materialized for spectators. I’ll state the matter plainly, knowing full well that I cannot unring this bell:

The makeover calls for the Bell-Maker to pop the marital material into the oven for two hours. Let me say that again: two men are ushered into a baking chamber. Today, it seems inconceivable that any comedy could place human beings inside an oven without conjuring visions of the Holocaust. And it seems just as inconceivable that, when the two husbands emerge majorly unimproved, burnt to a crisp, and blackened, that that could track as anything other than racist. Farce has always held that we laugh till we hurt and hurt till we laugh. Says Blotto the Cobbler in Monk-ey Business (also from Fart): we’re “laughin’ one minute and cryin’ the next, both at the same time.” Farce’s violence should hurt. It’s when it stops hurting that we have a problem not of theory but of practice. But should it hurt that much?

Unimaginable though it sounds in the abstract, we see gallows humor of this nature working—and playing—every day in the stand-up comedy of the likes of Eddie Izzard, Louis C. K., Jim Jefferies, Ricky Gervais, Bill Maher, or Sarah Silverman. In hilarious send-ups, they all manage to indict the Holocaust, racism, rape, pedophilia, and domestic violence while eliciting laughter. But, even in theater’s special brand of collapsible time, can Extreme Husband Makeover send human beings to an oven for two hours? Would it help if the prop looked less like a medieval Hell Mouth and more like an Easy-Bake Oven? No? What about the ominous teleportation device that remakes Jeff Goldblum in David Cronenberg’s The Fly? In theatrical translation for the page or for the stage, there is no mot juste; there are only les performances justes, all to be supervised vigilantly lest they become injustes.

More than any language on the page, the director’s vision of the oven will guide or reject, appropriate or reappropriate a very specific postmedieval meaning that could never have been part of the play’s original meaning. Then again, the medieval world was prone to atrocities of its own. If that’s to admit that translation can participate in revisionist history, then I can think of no better history—make that histories—to revise. Or to betray in the way that only theatrical translation invites us to do.