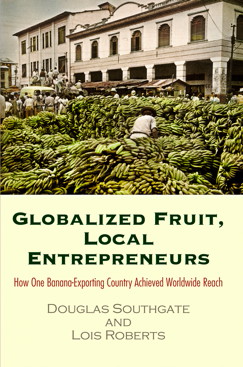 Today, we have an exciting guest post from Douglas Southgate, Professor Emeritus at Ohio State University and coauthor with Lois Roberts of  Globalized Fruit, Local Entrepreneurs, which challenges the perception that multinational corporations face no significant competitors in the international banana business. Southgate and Roberts focus on the role of local growers in Ecuador, which has been the world’s leading banana exporter for more than sixty years without ever being dominated by foreign corporations.

Not just a reliable prop for pratfall comedy, from the vaudeville stage to movies such as Woody Allen’s Sleeper, bananas are also a leading farm product.  In fact, international shipments of the fruit are much greater than exports of any other category of fresh produce.  Those shipments even exceed cross-border deliveries of rice, which is consumed in staggering quantities in China, India, and other nations that keep grain imports to a bare minimum.

Apart from the multi-billion dollar business of moving bananas from farms in Ecuador, the Philippines, and other tropical lands to consumers in places like the United States and Germany, bananas are an important subsistence crop.  A starchy variety called matoke is a staple food in many parts of Uganda and Rwanda.  More than 400 million impoverished people in Africa and elsewhere get at least 15 percent of their calories from bananas.  Most of these individuals would be hard pressed to find a substitute source of dietary energy.

Notwithstanding their importance, bananas are biologically fragile.  Hybridized by Asian farmers millennia ago, the fruit is propagated asexually.  Commercial production, in particular, amounts to monoculture on a colossal scale.  One variety, the Cavendish, accounts for practically all international trade and the vast majority of Cavendish plants on commercial farms are genetically identical.  Factor in tropical heat and humidity and those farms comprise an ideal arena for microbial mayhem.

This mayhem commonly takes the form of Black Leaf Streak Disease (or Black Sigatoka).  Between the speed at which the airborne fungus responsible for the disease evolves to withstand toxic compounds and the fungus’s rapid transmission from plant to plant, the banana industry spends at least half a billion dollars annually on pesticides in an attempt to keep Black Leaf Streak Disease in check.

Worse yet, no chemical countermeasures exist for other pathogens—most notably, Fusarium Wilt (or Panama Disease).  Race 1 of the disease drove the Gros Michel variety from grocery shelves decades ago.  Gros Michel’s commercial disappearance explains why we now eat Cavendish bananas, which growers switched to precisely because they resist Race 1.  However, a new strain of Fusarium Wilt, Tropical Race 4 (TR4), is devastating Cavendish plantations in Southeast Asia.  In a January 2011 New Yorker article, Mike Peed reported that TR4 is being likened in the region to the human immunodeficiency virus (HIV).

TR4 has been detected recently in Jordan and Mozambique, which has led to some breathless speculation about the impending collapse of the international tropical fruit business and worsening food insecurity for hundreds of millions of poor people who eat a lot of bananas and little else.  A collapse is by no means inevitable.  However, development of banana varieties that resist TR4 is a challenge.

Conventional breeding is an option.  But since commercial and other varieties are propagated asexually, the process is tedious and time-consuming, as Dan Koeppel documents in a 2008 book titled Banana.  The alternative is genetic modification, which people “cringe” at according Koeppel.

One reason to question this assessment is that sales of other bioengineered foods in the United States and other countries are voluminous.  Additionally, categorical rejection of genetically modified bananas would have no scientific basis.  Randy Ploetz, the University of Florida professor who first identified TR4, estimates that as many as 35 percent of all varieties of the fruit naturally withstand the disease.  Thus, bioengineering a TR4-resistant Cavendish, for example, need not involve introducing genes from entirely different species, which the opponents of agricultural biotechnology object to most strenuously.  Instead, genes would only be moved from one banana variety to another.  This cisgenesis, as scientists call the process, is biologically indistinguishable from what banana farmers have been doing for thousands of years, though cisgenesis has the great advantage of taking much less time.

Biotechnological research and development aimed at saving bananas will require spending several million dollars on laboratories, scientists’ salaries, test plots, etc.  The projected total outlay is actually tiny relative to annual commercial banana sales throughout the world, which exceed eight billion dollars.  A more vexing financial issue relates to who pays.  Any private company understands that, if it manages to create a TR4-resistant variety, the new variety is sure to be cloned by competitors that have contributed nothing to the underlying research and development.

The obstacles innovators encounter as they attempt to profit from their creative efforts are insurmountable when it comes to subsistence crops, including matoke.  Research and development for those crops consequently must be underwritten by the World Bank and other aid agencies as well as major philanthropic organizations, such as the Bill and Melinda Gates Foundation.

Bananas are worth saving.  And it would be a shame if existing technology and available resources were not harnessed to guarantee continuing supplies of the fruit for all consumers, impoverished and otherwise.  All that is needed is to find a reliable way to compensate innovators, which is a familiar challenge in today’s economy.