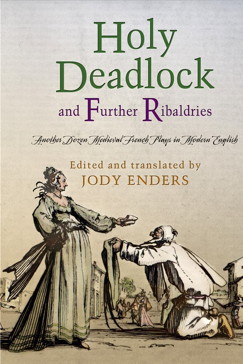 Today's guest post marks an exciting return for Jody Enders, Distinguished Professor of French at the University of California, Santa Barbara and editor and translator of two of Penn Press's most unique and fun books of recent years: 2017's Holy Deadlock and Further Ribaldries and 2011's The Farce of the Fart and Other Ribaldries. Both of these volumes bring the surprising sauciness of fifteenth- and sixteenth-century French humor into modern English. For today's post, Enders highlights an upcoming performance of one of the plays featured in Holy Deadlock, coinciding with the upcoming International Congress on Medieval Studies. She reflects on questions of translation, performance, and the durability (or not) of comedy when dealing with plays from centuries ago.

Whatever was a translator to do? Time and time again, there it was: the relentlessly sinister sexism of late-medieval French farce. Drawing on my own brand of feminist dramaturgy, I thought I’d figured out how to flip the whole thing on its derrière, transforming the unpalatable into something not just palatable but fun for the contemporary stage. But what happens when the sex objects are men? Believe it or not, that’s the premise of the anonymous Husband Swap (Le Trocheur de Maris), now awaiting its world premiere at the Mostly Medieval Theatre Festival in Kalamazoo, Michigan (8-9 May 2019), and, by the way, I quickly learned that promoting it as “Husband Swap at Kalamazoo” wasn’t the best way to go. Mon Dieu! It wasn’t a personal ad.

Featuring a cast of three extremely colorful housewives and one Husband Trader—apparently the answer to their prayers—this farcical romp invites us to ponder how to get out of a bad marriage. I mean, seriously: during the heyday of the Reformation, one of the husbands has even taken up with a “Protestant floozy.” Centuries before reality TV’s spouse-swapping shows, the answer was to trade him in for a new model! From the famous sixteenth-century compilation known as the Recueil La Vallière, the Trocheur de Maris from hadn’t been edited since the nineteenth century when my translation first appeared in Holy Deadlock and Further Ribaldries (Penn, 2016). And, happily, it has now been reedited by Thierry Martin because it’s clearly one of a kind. But, really, how funny is it when the Husband Trader steps forward with his merchandise? He’s got seventeen—count ’em!—seventeen husband specimens to propose to the dissatisfied wives, so…

To swap or not to swap? That is the question. But the other question is: To laugh or not to laugh?

As I wrote in an earlier blog, farce gets itself to the dark side pretty quickly. So, when the curtain goes up at the Gilmore Theater Complex during the International Congress for Medieval Studies, I can’t help but wonder whether Husband Swap will play as comedy or tragedy. On one hand, what could be funnier than—for once—seeing a bunch of men as animate props? On the other hand, what could be more heart-rending than the specter of human trafficking? If the theatrical medium is always the message, what will the message be today? In the hands of David Beach, the inimitable director who brought us Cooch E. Whippet in 2017 (from The Farce of the Fart and Other Ribaldries), will all the husband material track as the butt of a fantastic joke? Will they resemble a horrifically beaten-down prison gang? Or will the indelible mark of slavery be impossible to ignore and undercut any hope of comedy? See for yourself by joining us: