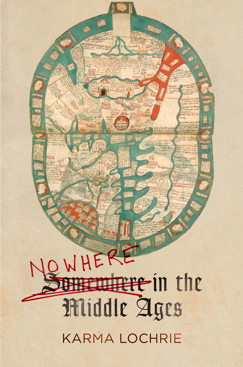 Today we have a guest post from Karma Lochrie, author of Nowhere in the Middle Ages and Ruth N. Halls Professor of English at Indiana University. While literary and cultural historians typically cite Thomas More's 1516 Utopia as the source of both a genre and a concept, Lochrie rejects this origin myth of utopianism along with the assumption that people in the Middle Ages were incapable of such thinking. Her book reframes the terms of the discussion by revealing how utopian thought was, in fact, "somewhere" in the Middle Ages.

When Thomas More published the first edition of Utopia exactly 500 years ago this year (in 1516), he could not have realized that he would be credited in the 21st century with inaugurating a genre of literature, an idea of a perfect society, and nothing less than modernity itself. It is true that he is responsible for coining the word attached to this idea and literary genre, and what a wry coinage it is! Derived from Greek roots, “utopia” means both “good” (or happy) place” and “no place” at the same time. If Thomas More couldn’t have anticipated the pride of place he would occupy with his little word, he nevertheless lodged a joke at the core of the concept—a pun that seems to posit an ideal at the same time that it cancels out the very possibility of that ideal’s reality. Utopia is that happy place that is “no place.” It is a paradox that establishes the placeholder for modernity and installs the crucial gap between the benighted (medieval) past and More’s Early Modern moment.

At least that is the story that we have come to tell about utopia: that it emerged ex nihilo with modernity, turning its back on the past and ushering in a new era of social dreaming of a certain kind. Utopia signals the dawn of modernity, and vice versa. The possibility that utopianism as an imaginative project of conjuring an alternative world or society to our own, engaging in a fictional world-making through cultural encounters, and challenging the cultural presumptions of the English worldview existed in the past—this possibility has not been entertained since we began telling ourselves that More’s idea was birthed by and gave birth to modernity. Ironically for the medieval past, utopianism was “nowhere” to be found. Not because anyone looked and found it missing in that long period before the Renaissance, but because the logic of More’s invention of the word precluded the very possibility that the Middle Ages had ever ventured into utopian waters before he did.

This story of how utopia came to be out of nowhere hand-in-hand with modernity carries with it a number of dubious assumptions and implications: first, that the historical division between the Middle Ages and the Early Modern periods is an oppositional one constructed around the antithesis of the latter to the former, so that a utopia in 1516 is, by definition, original to its time and antithetical to medieval ways of thinking and imagining; second, that the very capacity for medieval people, cultures, and authors to imagine—to dream—utopian worlds and perspectives is fundamentally inconceivable. The Middle Ages, we are supposed to believe, were prevented from dreaming other worlds that mirrored and critiqued their own by a Christian dogma reserved social ideals for the afterlife. The third implication of this narrative is that utopianism cannot derive from any other model than More’s, since his text is the first of its kind. One of the problems with imagining utopianism in the 21st century is precisely the narrow parameters within which we understand it in the first place as a programmatic society after the example of More’s island Utopia. But what if this narrative is not the whole story? What if the story of utopia extends not only back into the past but also into the future beyond 1516 and includes larger historical projects of dissidence, idealism, nostalgia, dystopian anger, and topographies of hope than are currently available? Without diminishing More’s work or substituting it with some other origin text for utopianism, it is possible to consider how it might have engaged with and been animated by other kinds of utopian thought projects that preceded and even succeeded it.

The Middle Ages, it turns out, is teeming with “nowheres,”—or utopian thought experiments—that engage in important ways with a diverse ethnographic, geographical, philosophical, political, and religious archive. The famous medieval poem, Land of Cokaygne, for example, bears uncanny echoes of More’s island in its location “somewhere” and “nowhere” and its satire of contemporary society. John Mandeville’s famous Travels strikingly prefigures the travel fiction of More’s work, but at the same time, it pursues a utopian cosmopolitanism that contrasts with the provincialism of More’s island. Finally, William Langland’s Piers Plowman creates one of the most complex, bracing, and perhaps “modern” utopian experiments from the Middle Ages—one that discovers hope precisely in the failures it imagines. All of these utopian literary experiments engage productively with More’s utopianism not necessarily as historical precursors but as interlocutors with his work. Beyond the medieval era in which these texts were produced, a legacy extends through the early modern period and into the 20th century.

Where does this leave More and his Utopia? Without displacing More’s contributions to the coinage of the concept and creation of a particular genre of utopian thinking, we might nevertheless consider what utopia looks like “unmoored” from Thomas More and his 1516 historical moment. What happens when, instead of reading More’s Utopia as the inaugural text for utopianism, we can envision an entirely new set of textual interlocutors with More’s work—interlocutors that not only significantly reshape and recast the way in which we read Utopia but pose new sets of questions for that reading? Whet new historical horizons of utopian texts, geographies, and epistemologies are thereby afforded us for reading Utopia and charting new strains of utopianism in conversation with More’s? If utopianism generally poses the “what if” to our present so that a vista of the future is possible, how does a more expansive historical past for utopianism contribute to that vista-making project? In her book The Nick of Time, Elizabeth Grosz has argued that “the past is our resource for overcoming the present, for bringing about a future. The more we avail ourselves of its resources, the more enriched are the current possibilities of transformation.” By expanding the reaches of utopianism in the past, we might wonder, what future possibilities of transformation are thereby enriched?