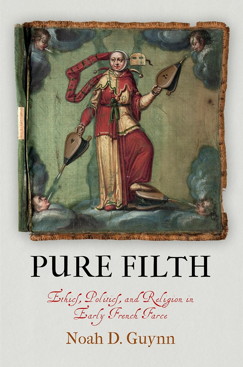 Today, we have a guest post from Noah D. Guynn, Professor of French and Comparative Literature at the University of California, Davis and author of Pure Filth: Ethics, Politics, and Religion in Early French Farce. Guynn's book reexamines the genre of farce, demonstrating that its superficial crudeness and predictability belie the complexities of its signifying and performance practices and the dynamic, contested nature of its field of reception. In today's post, he brings his analysis of farce into dialogue with a surprising phenomenon from contemporary pop culture.

Bravo TV’s Real Housewives franchise doesn’t always get good press from feminists. Gloria Steinem despises the shows and offers compelling reasons why. They present women’s bodies in absurdly stylized ways, “all dressed up and inflated and plastic surgeried and false bosomed.” They glamorize domestic leisure, depicting women as “rich, pampered, dependent.” And they stage “manufactured” conflicts in which women are “made to fight with each other” even as they profess sisterhood. Put simply, “it is a minstrel show for women,” purveying sexist stereotypes just as nineteenth-century minstrelsy purveyed racist ones.

I wonder, though, if there isn’t something subtler—perhaps even subversive—at play in the Real Housewives phenomenon. I wonder, also, if the study of early street theater might not offer us a more fine-grained, historically nuanced analysis of outwardly misogynistic popular culture.

By street theater, I mean the fifteenth- and sixteenth-century plays that are the subject of my new book, Pure Filth: Ethics, Politics, and Religion in Early French Farce. Not only were farces staged in the streets; they also depict private quarrels spilling into public view, quarrels that echo urgent ethical, political, and religious debates of the time. Plots are always contentious, occasionally violent, and grant numerous lead roles to women. Female characters battle one another for control of men, for customers in the marketplace, and for claims on social distinction. They also turn their words—and sometimes their fists—against indolent husbands, lecherous priests, and abusive aristocrats. In their truculence, they anticipate their Bravo counterparts, though the resemblance doesn’t end there. Seldom rich or pampered, they are always dressed up and false bosomed, played as they typically were by male actors. They also enact the crudest of sexist clichés: women as shrews, cheats, and sluts.

The classic feminist reading holds that misogyny is both medium and message here. Farce uses cross-dressed actors to ridicule real women and to invite male spectators to discipline their wives. Moreover, those wives were granted few opportunities for retort. The exclusion of female performers was said to protect their reputations. More likely, it served to deny them cultural expression and political voice.

Yet this reading takes little account of two arguments that greatly complicate our understanding of gender and domesticity in the period. The first is Natalie Zemon Davis’s famous reading of the “woman on top” in festive, carnivalesque culture. For Davis, this figure is a “multivalent” one: it justifies “the subjection of women” as it “widen[s] behavioral options” for both sexes, sanctioning “riot and political disobedience” for subalterns. The image’s ubiquity suggests the resilience of oppositional femininities; and given that the husband-wife pairing easily substitutes for other hierarchical relations, the woman on top expresses dissent of all kinds, often covertly.

The second argument, from Mary Hartman, is less familiar but equally useful for analyzing domestic drama. For Hartman, the woman on top was mimetic, not phantasmal: she reflected the reality that households in Northwestern Europe were small and unstable; that they obliged husbands to deputize wives to perform “masculine” tasks; and that women were able to test and contest patriarchal ideologies simply by doing their duty. This doesn’t mean the escalating misogyny of the period wasn’t real. Rather, it was a compensatory response to the implicit challenge women posed as deputy husbands and to the lack of a secure anchoring for masculine identity in everyday life. Households were not, therefore, “permanent sites of women’s oppression” but engines of social change, enabling women to thwart subjection by embracing it wholeheartedly.

In Pure Filth, I tease out the implications these arguments hold for farce, attending to misbehaved and well-behaved female characters who illustrate the richness of Hartman’s ideological paradox. In one play, a doting mother tries to prevent her son from joining the army, first reminding him of his obligations to father and patriline, then dressing in male clothing and making a ruckus that frightens off the battalion of “counterfeit” men who have enlisted her son. Her actions and disguise suggest insubordination, yet she is also unstinting in her devotion to the patriarchal household. By contrast, the father never appears in the play, leaving his wife to rescue the family alone and to expose paternal deficiency through womanly submission.

In another play, a philandering husband knocks up the maidservant, then gulls his wife into believing she (the wife) has impregnated him. The only way to ease his contractions and save their honor is to transfer the child from his ventre to the maid’s. Even as the husband convinces his wife to relinquish expectations of conjugal fidelity, however, he emasculates himself, converting wayward penis into spasmodic womb. Moreover, if the wife alone is concerned with their shared reputation (and the privileges of law and trade that depend upon it), it is presumably she who has the greater claim on the status of paterfamilias.

The paradox that women can simultaneously comply with and deviate from governing norms suggests a weakness in the heterosocial regime, which (to quote Judith Butler) fails “fully to legislate or contain [its] own ideals” and renders “the very social life of gender…malleable and transformable.” Yet we mustn’t rush to attribute subversive effects to parodic repetition. “Undoing gender” means more than dismantling “a normative restriction” or “a prior conception” of identity; it must also “inaugurate a relatively newer [identity] that has greater livability as its aim.” My thesis is that farce works to disclose the tenuous relations within patriarchy and to demonstrate how women can achieve greater livability by simultaneously submitting to and unsettling domestic norms. Farce wives acquire room for maneuver and raise political voices despite an array of ideological constraints. They do so by embracing the roles imposed upon them and playing them to the hilt.

But what about the Real Housewives? Are they the minstrels of patriarchy? For self-proclaimed “bad feminist” Roxane Gay, the answer is no: “[The shows] allow women to be their truest selves. We see the mess, we see their amazing friendships and everything in between. When women are allowed to be their fullest selves, that’s the most feminist thing we can do.” Yet surely Steinem is right that the reality of the Real Housewives is largely contrivance. If the stars are true to themselves and their friendships, they are also skilled performers, adept at fueling cultural fantasies of bosomy, combative, ferocious femininity.

In my view, the pleasure of the shows is in seeing how deftly the Housewives use both reality and fantasy to draw attention to themselves as performers, to engineer their circumstances, and to capture market shares for their “brands.” Admittedly, they often achieve these goals by attacking one another, betraying sisterhood with words—and sometimes fists. Yet this is equally true of androcentric forms of popular and high culture, including many that celebrate male violence while minimizing its injuries. By contrast, the Real Housewives have achieved an unprecedented feat by organizing a mass cultural phenomenon around middle-aged women—something Hollywood can hardly claim! They spark our interest by surrendering to the myth of dependent, cossetted femininity. Yet they also deny the men on whom they supposedly depend anything but minor supporting roles. Any husband who crowds the spotlight is instantly dismissed as the women reorient our attention toward the real focus of the show: female homosociality and competitive, theatrical self-display.

Are the Housewives engaged in subversive repetition? Do they work the weakness in domestic norms, enabling greater livability and social transformation? If we view them through long-durational histories of the household and evolving fictions of domesticity, perhaps they do.