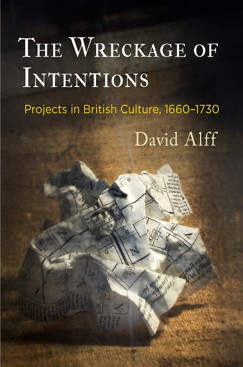 Today we have a guest post from David Alff, who teaches English at the University of Buffalo and whose exciting book The Wreckage of Intentions: Projects in British Culture, 1660-1730 was recently published by Penn Press. Alff's book explores the cultural history of the seventeenth and eighteenth centuries in Britain, which saw the proposal of endeavors called "projects"—planned scientific, technological, and intellectual interventions intended for the betterment of England. In today's post, he summarizes the insights his research and writing prompted, how he was drawn to the study of "projects," and what their relevance is for our current cultural moment.

In 2005, I graduated from college and went to work for a consulting firm. As a rookie analyst, I had much to learn about the world of business—foremost a new language. Phrases like “opportunity assessment” and “information assurance” flew around our office, but were hieroglyphs to me. I could not tell a win theme from a capture plan, let alone figure out how to advise clients on optimizing resource allocation or synchronizing deliverables.

But what most bewildered me was not this full-blown managerial jargon. Rather, it was the tendency of ordinary words to lose meaning in conversation. “What is a system anyway?” I asked a coworker after one beleaguering conference call. “Is there any difference between a process and a practice? A service and a solution? What do we mean when we say that certain action items are core and others are critical? Is everything we do development?” I filled a notepad with these elusive words and others—application, integration, enterprise—which seeped all over the place in part because they held for us no fixed meaning. I began to wonder how these terms had become simultaneously anodyne and ubiquitous: frustratingly vague but utterly indispensable. I wondered further whether it was possible to revive such depleted language by discovering the ideas that originally inspired it, and how this digging might help us understand experience and communication afresh.

This is what my book tries to do. The Wreckage of Intentions takes a single word from my notepad glossary and traces its meaning and impact through history. That word is “project,” which I define as a proposal for action and the possibility of action itself. A project, simply put, is a plan to do something and that plan’s execution. Today we are inundated with projects of all sorts: business projects, art projects, infrastructural super-projects, home improvement projects, and the projects of self-fashioning featured in television series like Project Runway and The Mindy Project. Projects have embedded themselves so deeply within the cultural fabric of western society that we seldom stop to account for their existence. Wreckage works against this unthinking familiarity by tracking notions of endeavor back to seventeenth- and eighteenth-century Britain, when “project” became a popular term for describing efforts to advance British society. Early modern Britain witnessed projects that sought to wage war and peace, to build libraries and administer lotteries, to sanitize London and explore overseas territories, to enlighten some people and enslave others.

Those who pitched projects promised that their schemes would advance society. Others attacked so-called projectors as hare-brained dilettantes who lacked the skills and knowledge to carry out endeavor, or as pernicious charlatans who claimed to care about the common good only to enrich themselves. The language of projects that I had found impervious and impersonal in the context of twenty-first century business communication was, in early modernity, salacious, a form of invective that conjured seedy self-interest, bald-faced deceit, and lunacy. One prolific author and critic of projects was the young Daniel Defoe, who fell into debt investing in schemes to manufacture diving equipment and farm cats for perfume. He called the 1690s a “Projecting Age” to capture its heady combination of scheming and dreaming, uplift and ruin. Some projects, Defoe acknowledged, benefited England by employing its poor and increasing public revenues, but others, he warned, “posed needless and unusual hazards.”

We have mostly forgotten about the project’s controversial associations today. Worn from use, the word feels more like a topical container than an investigatable object. And this is too bad, because few moments have called so urgently for reflection upon the language and logic of projects as the present.

Donald Trump campaigned for the presidency upon his image as a projector of condos, casinos, airlines, mortgages, and mail-order steaks. In Silicon Valley, Elon Musk’s visions of hyperloop transport, solar panel factories, and privatized space travel meet with fulsome acclaim and dismissive satire. Hurricanes, earthquakes, and wild fires have prompted urban planners to reconstruct and reconceptualize communities prone to natural disaster. What these enterprises share is a commitment to constructing the future through discrete, delimited endeavor. My account of projects suggests that there is much precedent for this kind of thinking, and a long history to the performance of promising the next big thing. Approaching old enterprises through the words their proponents left behind reveals how writers tried to make hypothetical things seem plausible through language that remains vital to statecraft, commerce, science, religion, literature, and business today. Projects have become so central to so much of what we do that their existence is easily taken for granted. Recalling the project’s unique and divisive history can, therefore, open new ways of understanding our present and the futures we build within it.