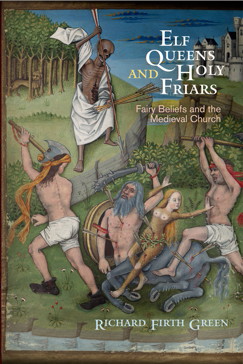 Today we hear from Richard Firth Green, author of Elf Queens and Holy Friars. Green is Humanities Distinguished Professor Emeritus of English at the Ohio State University. He is author of several books, including A Crisis of Truth: Literature and Law in Ricardian England, also available from the University of Pennsylvania Press. In Elf Queens and Holy Friars, Green investigates the role of "fairy faith" in medieval culture and offers a detailed account of the church's attempts to suppress or redirect these beliefs.

“Fairy Beliefs and the Medieval Church,” the subtitle of my book, Elf Queens and Holy Friars, begs two questions that I should like to take up here for the assumptions that it makes about both the nature of belief and the state of the medieval church. Broadly speaking (and conceding that actual usage will often be less clear cut), we use the expression “to believe in” in three distinct senses:

• Sense A: We can believe in a creed or article of faith in the sense that we espouse a certain doctrine—with the implicit corollary that we aspire to conform to the moral standards it entails; thus, “I believe in Islam” can mean, “I call myself a Muslim,” with the implication that I aspire to live according to the teachings of the Koran.

• Sense B: We can believe in something in the sense that we feel confident of its effects; thus, “I believe in Vitamin C” or “I believe in the Curse of the Billy Goat,” mean, “I believe that these things work.”

• Sense C: Finally, we can believe in someone or something in the sense that we accept the fact of their existence; thus, “I believe in ghosts or in UFOs” means simply “I believe that ghosts or UFOs exist”—it implies nothing about the way I aspire to live my life.

What then do these distinctions mean for what I am calling Medieval “fairy beliefs”? Am I simply suggesting that some people in the Middle Ages believed in the existence of fairies (a relatively uncontentious claim), or something rather more debatable: that such people also believed that fairies could make a difference in their world, or even that they consciously espoused a moral system at odds with church doctrine?

In order to answer this question I must first turn to the second element in my book’s subtitle. If anything the term “the Medieval Church” is an even more slippery phrase than “to believe in.” All too easily equated with what the Durants in 1950 could confidently call The Age of Faith, it implies a doctrinal unanimity and cultural homogeneity that recent scholarship has increasingly made to seem illusory (a historiographical shift skillfully analyzed by John Van Engen). Church historians like Jean Delumeau and Annalistes like Jacques Le Goff and Jean-Claude Schmitt have taught us that all kinds of aberrant beliefs and practices existed at the edges of, and even within, the Medieval Church, and that the rigorous intellectualism of scholastic theology was far from being universal at a pastoral level. Long after the Fourth Lateran Council had sought to systematize pastoral activity, and the mendicants (particularly the Dominicans) had set out to disseminate official doctrine at the parochial level, the “Medieval Church” remained anything but homogeneous. Obviously, then, the attitude of the Medieval Church (or Medieval Society in general, come to that) towards fairies embraced a wide range of beliefs and practices, and I can do no more than sketch out their main parameters here.

Furthermore, many non-literate members of secular society and some clerics believed (Sense B) in the ability of fairies/devils to influence things like weather, crops, health, and prosperity; this was denied by other clerics who claimed that fairies/devils could tempt and test humans but could not materially alter their world. Finally, there is no evidence (despite the claims of Margaret Murray and her followers) that medieval laypeople believed (Sense A) in the guiding power of the fairies; in other words, there was no medieval “fairy faith,” analogous to modern Wicca.

That said, there were various attempts to reconcile fairy belief (Sense C) with orthodox Christianity, and belief in the power of the fairies (Sense B) was sometimes expressed in terms of the dominant belief system. Ironically, the closest the Middle Ages came to imagining a fairy faith was in the hostile formulations of the clerical antagonists of this aspect of vernacular culture. Thus, by the late fifteenth century the superstitious beliefs condemned by thirteenth-century commentators had hardened into a fully-fledged heretical system—the ritualized devil worship that was to absorb early-modern inquisitors so intensely.

To illustrate the state of fairy belief in the earlier period let me end with one of the best-known accounts of a medieval fairy ritual, the “cult” of Saint Guinefort—analyzed for us in fascinating detail by Jean-Claude Schmitt in his book The Holy Greyhound (1979). In one of his collections of exempla, the Dominican Étienne de Bourbon (d. 1262) included a personal anecdote about his exposure of a group of women near Neuville-les-Dames, north of Lyons in Southern France, for seeking to recover their children from the fairies (called both “fauns” and “devils” by Étienne) and to banish the changelings that the fairies had left in their place. In order to do this they had enlisted the help of an old woman (vetula) prepared to guide them through an elaborate ritual at the shrine of a local saint, Saint Guinefort. This saint, Étienne discovered to his horror, was really a dog, whom the local people revered as a martyr (if you want to know his story, listen to James King’s bluegrass classic “Echo Mountain”). Clearly some of these women both believed (Sense C) in the existence of fairies and (Sense B) in their power to do harm—it is far less clear on the other hand that in this particular case Étienne himself believed (in either Sense B or C) in Neuville’s fairies/devils (though elsewhere in his work he shows himself open to both kinds of belief).

What is really interesting here, however, is Sense A. Although the women, conforming to the hegemony of the dominant elite, frame their ritual in terms of the cult of a Christian saint, the bricolage of their folk custom shows no signs of being part of a larger and more organized system of belief. For Étienne, on the other hand, it honors demons “as if they were divine,” and as such is an offense against the Christian God. True, at this period it is still only regarded as a troublesome superstition (the story is headed de supersticionibus contumeliosis), warranting no more than forfeiture of property as its punishment,  but two hundred years later, by the time of Jacob Sprenger and Henry Kramer, the authors of the Malleus Maleficarum, changelings have taken on a very different coloring. Not only do Sprenger and Kramer feel absolutely certain that such creatures exist, but they argue that they represent God’s punishment for sin, with the clear implication that anyone who meddles with such fairies/demons merits the attention of official “inquisitors into the plague of heresy” (pestis inquisitores heretice). As we watch here Étienne’s vetula (“cunning woman”) morphing into the Malleus’s notorious malefica (“witch”), we also witness a threat of punitive forfeiture being replaced by the terrifying specter of burning at the stake.