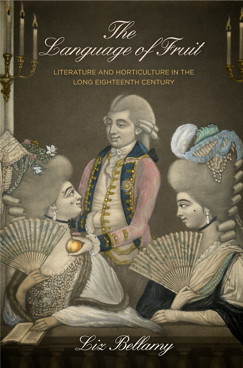 Today we have a guest post from Liz Bellamy, who teaches English at City College Norwich and the Open University and is the author of The Language of Fruit Literature and Horticulture in the Long Eighteenth Century. In this fascinating new book, Bellamy explores how poets, playwrights, and novelists from the Restoration to the Romantic era represented fruit and fruit trees in a period that saw significant changes in cultivation techniques, the expansion of the range of available fruit varieties, and the transformation of the mechanisms for their exchange and distribution. Here, she gives us a preview of her research and analysis.

Visitors to grand country houses in Britain owned by organizations such as the National Trust often conclude their tour of a property with refreshments served in the orangery, as many of these lofty spaces have been converted into shrines to the consumption of tea and cake. Seventeenth- and eighteenth-century orangeries were designed to give tender citrus trees the protection that they needed against the inhospitable climate of early modern Britain, sometimes with the assistance of elaborate systems of fires, stoves and pipes.

Yet it would be a mistake to assume that the presence of orangeries necessarily implied that people were growing what we would think of as oranges. Until well into the eighteenth century, British orangeries were primarily intended for the production of ‘greens’, that is, winter foliage, rather than the round fruits that gave the color its name. They provided a pleasant location for a winter walk, surrounded by the exotic smell of the leaves and perhaps blossom of orange and lemon trees, at a time when there were relatively few indigenous evergreens. Occasionally, documents include boasts by early modern landowners or gardeners that their citrus trees have produced fruits, but even when these are described as ‘large’, they were very different from modern oranges and lemons. Samuel Pepys first encountered an orange tree in 1666 and he describes how he “pulled off a little [fruit] by stealth (the man being mighty curious of them) and eat it, and it was just as other little green small oranges are; as big as half the end of my little finger”. As late as 1724, Philip Miller quotes Richard Bradley, the first professor of Botany at Cambridge University, who boasts that orange trees planted following his directions will set fruit “about the Bigness of a Musquet-Ball” (i.e. one to two centimeters in diameter). While the primary purpose of the citrus trees was decorative, these small green fruits could have ‘Physical’ (medicinal) or culinary uses, and John Parkinson suggests that when “candid with sugar” they can “helpe to warme a cold stomack, and to digest or breake winde therein”.

Large dessert oranges were nonetheless familiar in early modern Britain, most notably associated with the “orange wenches” who vended fruits in the Restoration theatre, but these were not the produce of the elaborate, architect-designed orangeries of the aristocracy. The citrus fruits sold on the streets of London were imported from Portugal and Spain and were identified with commodification and foreign trade. They therefore have very different symbolic connotations from, on the one hand, orchard fruits such as apples, pears and quinces, which represented wholesome domestic production and the innocent simplicity of the rural laboring class, and, on the other hand, the delicate wall fruits such as peaches, nectarines and apricots which were produced in country house gardens and the homes of the gentleman husbandman and represented the refined tastes of the elite.

The Language of Fruit explores the developments in technological and horticultural techniques that affected the production of orchard fruits, wall-fruits, and exotic fruits such as the orange and pineapple, showing how the practical aspects of production and distribution shaped the iconographic associations of different kinds of fruit. Through analysis of horticultural writings, as well as poems, plays and novels from the early modern period, it explores how literary representations of fruit manifest changing attitudes to the economics of cultivation, but also evolving concepts of class, gender and race. This engagement with the contemporary context is, however, mediated not only by the conventions of the various literary genres but also by symbolism derived from the fruit stories of the Bible and classical myth. Through readings of seventeenth-century poetry, Restoration drama, eighteenth-century georgic and the Romantic period novel, The Language of Fruit traces the development of fruit iconography to reveal the continuing interplay of specific historical context, mythological resonance and the demands of literary form, providing a case study of the complexity of cultural production.