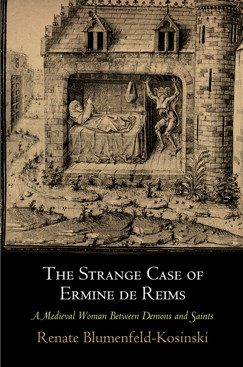 Today we have a guest post from Renate Blumenfeld-Kosinski, author of The Strange Case of Ermine de Reims: A Medieval Woman between Demons and Saints, which follows the story of a poor and illiterate peasant woman named Ermine who moved to the city of Reims with her eldery husband in 1384. After the loss of her husband, however, things took a remarkable but frightening turn. For the last ten months of her life, Ermine was tormented by nightly visions of angels and demons. In her nocturnal terrors, she was attacked by animals, beaten and kidnapped by devils in disguise, and exposed to carnal spectacles; on other nights, she was blessed by saints, even visited by the Virgin Mary. She confessed these strange occurrences to an Augustinian friar known as Jean le Graveur, who recorded them all in vivid detail.

The story of Ermine de Reims is fascinating for many different reasons: the varied, even excessive nature of the demonic assaults to which she was subjected; the interesting relationship that developed between this simple woman and her confessor, an Augustinian friar named Jean le Graveur; the text’s unusual genre, a kind of logbook of daily and nightly visions and vexations, noted down by Ermine’s confessor; the opinions solicited from such an important personage as Jean Gerson, chancellor of the University of Paris, after Ermine’s death in 1396—all these aspects make Ermine’s story unique, but also allowed me to circle around Ermine and Jean le Graveur from many different perspectives and integrate their experiences into various contemporary frameworks such as the discernment of spirits or late medieval devotional piety.

One of the key problems I hoped to solve in this book was: How did Ermine's contemporaries see her? What kinds of interpretative frameworks were available for experiences such as demonic attacks and even demonic exhibitionism? In a scene that startles me to this day, a young demonic couple enters Ermine’s bedroom and proceeds to have sex on the floor right in front of her bed. At other moments, demons join her in bed but begin to snore rather than assault her sexually. What kinds of meanings can we assign to such events?

Demons and sex were a staple of later witchcraft treatises, but in 1396 when these events occurred it was not clear to ordinary people or even churchmen how to interpret these kinds of demonic assaults. Were they saintly tribulations on the model of desert saints like Saint Anthony? Sorcery involving the summoning of demons for various services? Or devil worship and copulation with demons, the hallmark of later treatises on witchcraft like the Hammer of Witches,authored by the Dominican inquistiors Krämer and Sprenger in 1486–87? Thinking about the scenes of exhibitionist sex and demons slithering into Ermine’s bed in conjunction with another one in which a demon warns Ermine that she could be accused of being a sorcière, the French word for sorcerer or witch, made things fall into place for me: Ermine’s experiences and the resulting text, The Visions, are located at a turning point in European history when the horrific and deadly witch persecutions that lasted all the way into the Enlightenment first began to take shape. Walter Stephens showed in his 2002 study Demon Lovers: Witchcraft, Sex, and the Crisis of Belief that around 1400 there was a shift in the perception of the relationship between women and demons. While before 1400 demonic sexual advances were most often seen through the lens of saintly sufferings that had to be endured, after 1400 ideas on humans’ sexual submission to demons, or even humans (especially women) seeking out demons for sexual pleasure, began to be connected to devil worship and witchcraft. The for us absurd accusations leveled against women in witchcraft trials drew on an imaginaire that existed before 1400, such as the demonic hauntings of Ermine, but reinterpreted in new and deadly ways.

Another issue—and this is a point that did not make it into my book but only into a lecture I gave at Princeton University in November 2014—is the question of money offered by demons. Here again I believe that Ermine’s experiences are located at a turning point. At a nocturnal demonic gathering in the woods outside of Reims (to which Ermine had been transported on a demonic flying horse) she is offered sacks of gold coins—to combat her poverty, as the demons suggest. But, and this is striking, the demons ask nothing in return. She is not required to enter into a demonic pact or sign over her soul. This scene contrasts sharply with later fifteenth-century offers of demonic money. A typical example is the Errores Gazariorum, an anonymous treatise from the first half of the fifteenth century that contains the canonical accusations against “witches,” male and female: they fly on staffs or broomsticks fueled by unguents; they roast and eat babies; and they worship the devil in the shape of various animals and kiss his behind. [1] Especially vulnerable to demonic recruitment are people who have consumed all their goods but still want to live the good life. In the Errores the devil leads those who have joined “the synagogue” (an act for which they are sometimes paid, but very little) into the houses of the rich—nobles as well as bourgeois and “others”—so that they can feast to their hearts’ desire. One man is approached by an acquaintance who promises him “dix livres de Lausanne” if he accompanies him to the “sabbath” where the usual things happen. That attendees of the “sabbath” were compensated is in fact a common theme in these so-called confessions. [2] Thus, although money does not play the central role of the diabolic kiss, the riding on broom sticks, or the eating of children, it still has a crucial function in these confessions. Often the moment of receiving money coincides with the renunciation of the articles of the faith and of the sacraments and the desecration of the Host.

Now we can return to Ermine and the dramatic instance of demonic offers of money in the woods outside of Reims: first demons in the shape of home town friends offer her several sacks of cash and then a fake saint does the same, stating that she “is a poor and feeble woman who lives from alms.” What would you do, he asks, if your confessor dies and leaves you penniless? Take this pile of cash, he urges her, you could give some to charity (he will always refill the sack!) and keep the rest for your retirement. What is striking here is what is missing: Ermine is not asked to join a devilish sect as a condition for receiving her sack of cash and her refusal does not result in the kind of horrible vengeance that some people experienced in later tales. And although demons urge Ermine again and again to renounce the tenets of Christian dogma (I treat this theme at length in my book) this renunciation is never linked to offers of cash as it is in the later witchcraft trials. So for the two domains of demonic sex and demonic money Ermine’s story contained the motifs that were soon to become the paradigm of the witch hunts but it stopped short of turning her into a witch herself.

Renate Blumenfeld-Kosinski is Professor of French at the University of Pittsburgh and a Fellow of the Medieval Academy of America. She is the author of several books, including Poets, Saints, and Visionaries of the Great Schism (1378-1417).