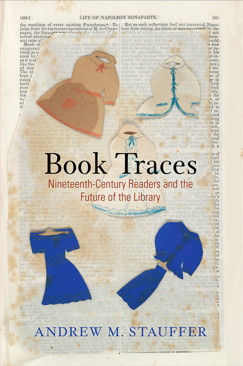 Today, we have an interview reposted from Books Tell You Why, featuring a discussion between Audrey Golden and author Andrew M. Stauffer, whose book Book Traces: Nineteenth-Century Readers and the Future of the Library was recently published by Penn Press. In Book Traces, Stauffer reads nineteenth-century poetry through the clues and objects earlier readers left behind in their books and defends the value of the physical, circulating collections of nineteenth-century volumes in academic libraries. This interview explores the book's origins in an earlier project and its resonances for how we understand books both in the past and today.

What makes a book rare? Can books have afterlives? And when might markings and ephemera in well-loved texts actually increase the worth of the object? Andrew Stauffer's new book, Book Traces: Nineteenth-Century Readers the Future of the Library, investigates the personal and collective narratives that arise out of nineteenth-century library books in circulation at varied institutions.

The text grows out of Stauffer's work on the Book Traces project at the University of Virginia, and it provides us with a path toward reimagining what it is we mean when we discuss the value of a book in the twenty-first century. I had a chance to chat with Andy about Book Traces and the exciting ways in which it centers the material object in an increasingly digital world.

Audrey Golden: I know we talked before about the Book Traces project, but can you remind readers about the contours of the project and say a bit about how Book Traces grew out of it?

Andrew Stauffer: The project began when I realized, with the help of my students, that a lot of the older books in our university’s circulating collection [at the University of Virginia] had inscriptions, marginalia, and other marks of ownership and reading that were made before the books came into the library. It turns out that a large percentage of our nineteenth-century books were donated by alumni and local families, and these volumes had had significant lives before they became institutional resources. It soon became clear that this was true of many academic libraries in the United States, where collections were built through these kinds of gifts.

The result is this great unintended archive of the history of everyday reading, of the ways that books were involved with the lives of American readers. Based on this project, Book Traces: Nineteenth-Century Readers and the Future of the Library is an exploration of many books discovered during the project, located across multiple institutions. I focus on the ways people interacted specifically with books of poetry, and what the marks they left behind can tell us about what poetry and books meant—what they were—to these readers in the great age of the book.

AG: How did you select the libraries you visited for source material? I'm thinking specifically about the botanical specimens pressed in books at the University of Miami and wondering if there are particular libraries or archives that are more attuned to the value of collections with these kinds of "book traces."

AS: We started by putting out a call via a crowd-sourced website, booktraces.org, encouraging people to go into their local college or university library and post examples of marked copies they found. This led to lots of classroom collaborations, site visits, and scavenger hunts—what I called “flash mob bibliography” or “guerrilla librarianship” at any institution that would organize a search. We worked with an amazing range of institutions, from small liberal arts colleges in the northeast to places like UNLV out west and, as you say, the University of Miami and other southern schools. Often we worked most closely with special collections librarians, who were interested in the value of specific copies and understood that the circulating collections may contain material of historical and scholarly importance.

AG: When you find books in general circulation that contain traces, it seems like you must have to engage in a kind of investigation, taking on a detective-like role, to track down the origins of the object. Are there any particularly good stories from Book Traces that come to mind?

AS: The detective work is a big part of the appeal, in addition to the quasi-archaeological "digging" through the shelves of books for interesting items. When you see a name, a date, and a place inscribed in old nineteenth-century cursive ink, you know you’ve got a thread you can pull. My favorite examples are all in the book. One involves tracing two lovers who read a copy of Longfellow’s poetry and then were parted; the woman, Jane Slaughter, returned to that old book many years later to re-annotate it, lamenting his absence in new marginalia next to the old. I remember going through her family papers and suddenly finding a striking self-portrait she had drawn when she was eighteen: it was like making contact with the past.

AG: In the process of developing the Book Traces project and writing Book Traces, what did you learn about preservation practices for some of the "traces" you found, from preservation of pen/pencil ink marginalia to the botanicals affixed to pages?

When I first started working on the project, a preservation librarian told me, “when I see writing in the circulating books, I erase it!” That shook me, since I knew that a lot of it wasn’t student graffiti but rather historical evidence. Preservation of circulating materials is comparatively uneven, since they are assumed to be replaceable copies. And nineteenth-century books are often in bad shape due to brittle paper or other aspects of their mass-market construction.

So the big question is, what do we do with these ‘book traces’ books once we have found them? What sorts of preservation and storage protocols should hold sway? As you suggest, botanicals can be particularly fragile; and they also damage or stain the pages of the book. So there are some complex decisions to be made about what it means to preserve these unique objects.

AG: I'm interested in this classification of "nonrare" that you describe, which results in books being placed into general circulation at a library. Does Book Traces ultimately suggest that the category or classification of the "rare book" as we currently conceive it should be reimagined?

Yes, I’ve always thought that the Book Traces project aims to trouble the division between special and general collections. Books from the nineteenth-century have crossed a threshold into the “old,” now that we are well into the twenty-first. Most aren’t rare, precisely, because many copies were printed for the emerging mass market; but these marked copies are of course unique. So Book Traces is about locating a manuscript archive written within the printed books; these copies combine features of both.

AG: Has the project changed your own perception of book "value" or "worth"? Of course, those terms are always relative, but Book Traces suggests that there's immense cultural value in objects that rare booksellers might describe as having relatively little (market) value.

As my erasure-eager librarian indicates, marks in books are often thought to deface or spoil them. The book historian William Sherman notes that bookseller Quaritch called a heavily- annotated 1586 Psalter “soiled by use,” whereas the Huntington Library described the same copy as “well and piously used,” containing “marginal notations in an Elizabethan hand” that “bring to life an early and earnest owner.” So there are these competing ideas of what makes a book valuable. When I look for marked copies online, I have to write to booksellers to assure them that I consider the contemporary handwriting to be value-added, not defacement. But the long tradition of collecting and librarianship favors clean, bright copies – unless the annotations were made by someone famous or with a close association. The books that form the basis of Book Traces were deemed, at point of entry into the library collection, not special or valuable enough for the rare book room. But our research has changed that verdict in a number of cases.

AG: Why is it important to distinguish, for you, between "historical annotation of one’s own books is something dif­ferent from patrons’ marks in the books belonging to an institution"? Should readers and/or collectors strive to do the same?

AS: From the beginning, I was interested in nineteenth-century book ownership, reading, gifting, and marking, and so I worked hard to distinguish earlier marks from those made later by patrons. Highlighter pen and ballpoint ink were obvious tells, as were modern student annotations such as “Foucault” or “appearance v. reality.” I was also eager that people understand Book Traces was not about marking library books, but rather about capturing marked copies that libraries had happened to collect. Someone might get interested in student annotation of library books across the twentieth century – that could be fascinating – but Book Traces has aimed at a different target.

AG: When a reader discovers something interesting in a library book that's in circulation or that hasn't been identified in archival notes, what should they do?

AS: Submit a picture and some information to booktraces.org! It’s easy to do with your cellphone or mobile device. That’s the best way to share it and invite more interaction with it. I’m looking forward to the libraries opening again for browsing post-pandemic, and hope we all we make more discoveries, particularly at schools we haven’t visited.

AG: For a reader who discovers marginalia in a library book or in a used book they've purchased, how might that person shift their perspective so that they no longer see those elements as defacement or graffiti as you describe them in Book Traces, but instead as cultural traces with value and meaning?

AS: The advent of things like online genealogy, Google Books, the Internet Archive, and other massive bodies of digital information makes it easier than you might think to find out more about your annotator. If you have a name, date, and place – information that nineteenth-century readers often added on the flyleaf — you can usually find out a decent amount about where this book fell in the course of their life. Suddenly the traces come alive when you have a biographical context for that early reader. I have found books of love poems annotated by young women just months before their marriage, or by mothers soon after the death of a child, or by lovers across the course of a relationship. So the marginalia really can tell a story once you know who wrote it. Also, I would say that some marginalia is really beautiful. It’s an art in many ways: readers redesigned their printed pages with handwritten and hand-drawn marks. You can really see personalities emerge.

AG: How about your own book practices: do you "personalize" your books or books you give to other people, and/or do you mark your books with dates and other marginalia? And have you ever marked a library book?

AS: I’m much more aware of the value of inscribed and personalized books, so I’m trying to do it more, particularly in books that will almost certainly never be valuable. No one is going to collect our physical books or accept them into libraries (unless we wind up very famous or have ourselves built up a valuable collection on purpose). So why not use them now as journals, inscribed gifts, places to think and leave trails, date-stamped windows onto our reading lives? I plan to inscribe a lot of copies of Book Traces to all the people who helped make it happen. As to writing in library books, well: I have occasionally corrected a typo and maybe once or twice a point of fact – but that was all a long time ago when I was younger and thought I knew everything. I hope I’m wiser now.