The discovery of John James Audubon's first published illustration, a three dollar bank note featuring a running grouse, is nothing to gripe about. The find by Robert M. Peck and Eric Newman has captured the attention of the Philadelphia
Inquirer, DiscoveryNews, ScienceDaily, NatGeo (National Geographic) Newswatch and other media outlets. 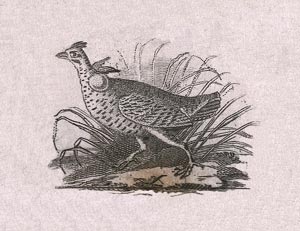 From the Academy of Natural Sciences press release:

After a decade-long search by an Audubon scholar from Philadelphia’s Academy of Natural Sciences and a numismatic historian from St. Louis, Audubon’s first published illustration of a bird has been discovered.

In a forthcoming article in the Journal of the Early Republic, Robert M. Peck, curator of art and artifacts and senior fellow at the Academy of Natural Sciences, and the article’s lead author, and Eric Newman, an authority on American money, reveal their discovery and explain how Audubon’s fledgling entry into the visual world of commerce took place. The find is important not only for solving the puzzle of the missing engraving, but also because it illustrates Audubon’s development as an artist of American subjects. It also provides a rare, contemporary view of the Heath Hen, a subspecies of running grouse that has become extinct since Audubon portrayed the bird in the early 19th century.

The Newman and  Peck article will appear in the Fall 2010 issue of the JER, available on August 31.