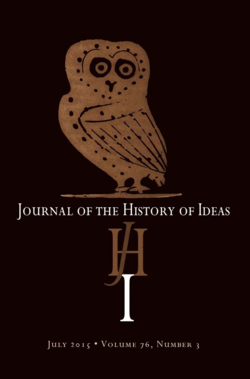 This edition of Paul's Picks, where we feature a free article from one of Penn's journals selected by our Journals Operations Manager Paul Chase, comes from the Journal of the History of Ideas. JHI, as it is widely known, is committed to encouraging diversity in regional coverage, chronological range, and methodological approaches. JHI defines intellectual history expansively and ecumenically, including the histories of philosophy, of literature and the arts, of the natural and social sciences, of religion, and of political thought. It also encourages scholarship at the intersections of cultural and intellectual history—for example, the history of the book and of visual culture.

Today's article is entitled “‘Science Organized’: Positivism and the Metaphysical Club, 1865–1875,” by Trevor Pearce of University of North Carolina at Charlotte. Here's the author's note:

In this paper, I explore the work of several positivists involved with the “Metaphysical Club” of Cambridge, Massachusetts, in the early 1870s—Fiske, Wright, and Abbot. Like the logical positivists of the 1930s, these philosophers were forced to answer a key question: with so many of its traditional domains colonized by science and so many of its traditional questions dismissed as metaphysical or useless, what is left for philosophy to do? One answer they gave was that philosophy could unify the sciences. As Fiske put it, “positive philosophy is science organized.”