Here at Penn Press we are rightly known for the depth and quality of scholarship we publish in book form. But Penn also publishes more than a dozen top-quality scholarly journals. To better highlight all the great work getting done in them, we periodically feature free articles selected by our journals operations manager, Paul Chase.

This month, we have an article from The Eighteenth Century: Theory and Interpretation. By Erin M. Goss, it's titled "Homespun Gossip: Jane West, Jane Austen, and the Task of Literary Criticism." Read the abstract below, then click here to read the full article. 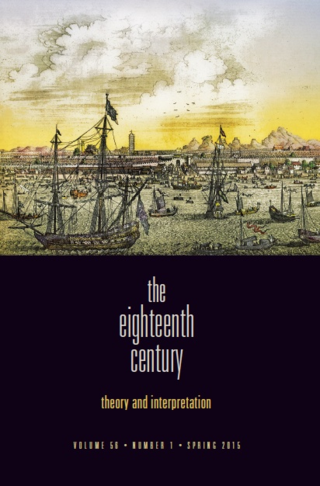 This essay focuses on Prudentia Homespun, Jane West’s eponymous gossiping narrator in A Gossip’s Story, and reads Prudentia’s gossip as a critical lens through which to consider the role of fiction in the circumscribed lives that gossip indicates. Gossip serves a primary function for the society that produces it, and that function, as shown in the work of both West and Austen, merits some ambivalence. For Patricia Meyer Spacks and others seeking to redeem gossip from its status as a degraded speech act, gossip produces and promotes a healthy and vibrant community. For many others, gossip is primarily a tool for surveillance and control. Ultimately, there may be little difference between these two functions. Through a reading of West’s novel, and by placing West’s novel in relationship to the novels of Jane Austen, I show how gossip also generates an outlet for creativity in constrained circumstances. As a result, gossip in Jane West’s A Gossip’s Story offers not only a way to think about the form of the novel, but also a way to think about the work performed by literary criticism, itself a form of circumscribed community.