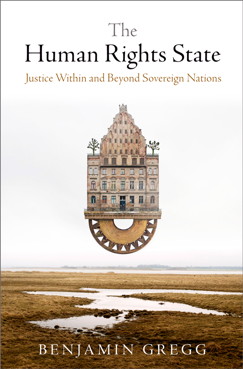 Today we have a guest post from Benjamin Gregg, author of The Human Rights State: Justice Within and Beyond Sovereign Nations. Gregg's book challenges the conviction that the nation state can only have a zero-sum relationship with human rights: national sovereignty is possible or human rights are possible, but not both, not in the same place, at the same time. He argues that the human rights project would be more effective if established and enforced at local levels as locally valid norms, and from there encouraged to expand outward toward overlaps with other locally established and enforced conceptions of human rights grown in their own local soils. Proposing a metaphorical human rights state that operates within or alongside a nation state, Gregg describes networks of activists that encourage local political and legal systems to generate domestic obligations to enforce human rights.

For the first time since evolving 200,000 years ago, Homo sapiens sapiens may soon transform itself biologically, a development no less significant than Copernicus’ transformation of the geocentric world view or Darwin’s of the anthropocentric understanding of animal life. One aspect of transformation is irresistibly hopeful: making predictive genetics available to all persons so that all might avoid or minimize genetic risks; providing prenatal genetic modification to decrease disease-susceptibility, eradicate congenital disabilities and extend life-span. But a different aspect of transformation unnerves: like the Copernican and Darwinian revolutions, it forces us to re-evaluate our understandings of ourselves as human beings and our relationship to other forms of life on our planet. I do just that in a book I am currently writing titled Human Nature as Cultural Design: The Political Challenge of Human Genetic Engineering. For reasons I develop below, I argue that we humans should regard our own nature as socially constructed rather than as something given naturally or supernaturally.

Consider, for example, the prospect of genetically engineering human intelligence. And of the many questions that pose themselves, consider two.

First, is it ethical? The answer to this question depends on the ethics one invokes in answering it. Any answer is likely to involve one or the other of the many conceptions of human nature.

If “human nature” is something natural, such as an aspect of a wholly naturalistic understanding of the evolved species homo sapiens, then engineering any part of it, including human intelligence, is not unethical from the standpoint of natural science because natural science has no moral content, indeed no meaning whatsoever.

But over the last ten thousand years, this worldly nature has been interpreted non-scientifically again and again, for example from the otherworldly perspectives of religion and metaphysics. These perspectives invest nature with distinctly non-natural properties. The Book of Genesis, written in the 6th or 5th century BCE, invests the natural universe with divine design and purpose. From that perspective, engineering the human being may be regarded as violating a sacred design (but presumably only for those who share this very particular worldview).

Modern biology has no concept of what philosophers, theologians, and poets call “human nature.” Still, modern secular political communities, such as liberal democratic nation states, need to socially construct a range of human natures for purposes of social organization. Above all, one or the other notion of human nature can be useful in grounding the normative legitimation of a system of laws and to guide some forms of public policy.

For example, the German Constitution, Article 1, declares that “human dignity shall be inviolable.” The term dignity may be interpreted as allowing the engineering of human intelligence; it can just as well be interpreted as not allowing it. Either interpretation will base itself on a particular conception of human nature. That conception will be law not because it is true — propositions about nature can be true or false (as a matter of objectivity) whereas propositions about how people should be treated can be just or unjust (as a matter of intersubjective social construction).

In sum, whether it is ethical to engineer human intelligence depends on what ethical system one deploys to answer this question. There are many ethical systems in history, in the world today, and new ones no doubt will be developed in the future. All of these are incompatible with each other to various degrees, and agreement on any one is in principle possible, but exceedingly unlikely today. The basis of such agreement would be a political act of a global embrace of a particular cultural understanding, for example like the widespread conviction today that slavery is unacceptable on any grounds.

A second question about prospect of genetically engineering human intelligence concerns desirability. Again, any answer to this question depends on one’s particular point of view (there are no “objective” or “neutral” standpoints here). From whom might it be desirable or undesirable? For the individual? For his or her community? For humankind? For the planet? In each case, both yes and no are plausible answers. For intelligence in any environment is double-edged: it has no inherent moral compass and can facilitate just behavior as well as unjust, decency no less than barbarism.

Consider the individual: greater intelligence means heightened capacity to imagine and realize goals — but could just as well damn the recipient to the continual frustration of a world that will not bend to his or her will. Consider the community: heightened intelligence promises a more productive, creative, and thoughtful populace — but could also result in more aggressive, selfish persons better able than unenhanced citizens to take advantage of fellow citizens. Consider humankind: might a species of greater intelligence better find its way to a peaceful world of just communities — or to an intellectual, social, and material “arms race” among competing groups? Consider the planet: would a species of higher intelligence be a better steward of the fragile planet it shares with other species — or one more rapacious, because its heightened intelligence unleashed heightened needs and the will to realize them even at the planet’s expense?

This exercise merely shows the obvious: that the knife that can save a life can also take a life. Less obvious because necessarily hypothetical are unintended consequences. The very fact of their not being intended marks such consequences as risks. Some risks follow simply from the powerful, exceeding complex interdependencies of various variables. While some risks pay off, others don’t. Is heightened intelligence worth that risk? We cannot yet know.

Further, engineering costs money and, at least initially, only wealthy persons would be able to afford the enhancement. In this way, engineered intelligence would exacerbate existing social and economic disparities if, as seems likely, greater intelligence confers advantages in the various spheres of life in which people compete for advantage — spheres in which some are perpetual losers.

In short, whether it is ethical and desirable to engineer higher intelligence depends not on the heightened intelligence as such but on the complex weave of social, political, economic, cultural and ecological factors that compose human communities. These factors constitute the environment in which bearers of engineered higher intelligence behave. Consider just two factors: wealth and influence. Money is power and people struggle mightily against each other to gain more wealth and wield greater influence, both as individuals and as groups and as nation states. If, as seems likely, heightened intelligence confers advantages, at least to some recipients, at least some of the time, at least in some circumstances, one can imagine a socially destabilizing struggle to control access to it—a struggle with winners, losers, and “collateral damage.” But not necessarily.

Any estimation of the problems and prospects of human intelligence, whether engineered or not, will depend on some conception of human nature. If human nature is a social construction, the two questions I consider above will find quite a range of answers in a context of deep, intractable, and abiding disagreement within communities and across cultures. But I would hope to persuade my readers that the idea of humankind directing, politically, the course of its own evolution need not mean taking control of the species’ genome. It could mean taking control of the socially constructed cultural environment in which genetic enhancement takes places. The moral and political question — is there some kind of human nature and, if so, what it might be? — is then the question of what constitutes human well-being, just social arrangements, as well as individual and collective virtue. It is, in short, the question: not, What is our nature? But rather: What do we want our nature to be?