A Glorious Enterprise: The Academy of Natural Sciences of Philadelphia and the Making of American Science, by Robert McCracken Peck and Patricia Tyson Stroud, features original photographs by Rosamond Purcell. Purcell found an unconventional studio space for her work, the Academy's rooftop. In this blog post, she shares some of her observations on natural history and natural light photography. 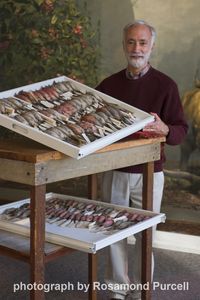 It was overcast and dark in the back rooms on the first day when we embarked on this exhilarating project at the Academy of Natural Sciences of Philadelphia. The first specimens we contemplated seemed drab, their charms unforthcoming. Bob Peck knew that I preferred to photograph using natural light, so we spent the morning hunting for optimistic window sills and faint glimmers. I searched through stiff-drawered cabinets of ancient chalk nodules, looking for beauties and leaving paper scraps in my wake. At about 2:00 p.m. we went outside, taking along several fossil ammonites and a few of the chalks found by the eighteenth century paleontologist, Etheldred Benett. Collections manager Ned Gilmore carried the specimens and kept us company, and, as a cheerful team, we explored the best open-air studio that this–or any other–institution had to offer.

With the light shifting from place to place through the hours, we worked on the flat roof of the Academy. We considered the specimens and artifacts laboriously transported to this playground–one half covered with variegated stones, and the other half with tar paper and a fragile rubber skin. We assiduously avoided the damp spots and tread with care, at times without our shoes.

That day, and on all successive visits, only those animals, minerals and exhibition artifacts that would not be injured by brief exposure were brought outside. Whatever the curators allowed to be up here was bathed in a new-found visibility they did not enjoy in storage, even (sometimes especially) when the sky was overcast. The source crucial to this effect, spectrally complete sunlight which comes from so far away, fell evenly on the objects, casting precise shadows and highlighting their true colors.

It was a foreign country up there: away from offices and the recesses of storage rooms, we were surrounded by tall buildings. The roof functioned like a stage at the bottom of an amphitheater, and we were being watched, most certainly, for how could there be so many windows without witnesses to these happenings? How many guests at the Four Seasons Hotel or day-dreaming office workers, who, upon catching sight of Bob Peck, Ned Gilmore and me bent over a few gorilla skulls, gesticulating at the needle rows of teeth of a monk-fish, bulging mineral lumps or coiled snake skins, did not wonder what weird ceremonial rites we were engaged in? But aside from occasional workmen on nearby low buildings, we saw no one, and so believed that we worked unobserved in panoramic peace as I recorded exotica collected by naturalists from around the world over the course of the last two and a half centuries. I found dried rusty rivulets to frame the objects and hardened tar bubbles and pools to accommodate the minerals and fish skulls, mimicking the places where some of the specimens themselves were once discovered.

I studied the architecture of the animals; the nature of the bone, horn, enamel, cartilage, and the inside of the fossilized shell of a chambered ammonite, extinct cousin of the nautilus, turned to rock. Its chambers are complex ornate cubicles of silver-white stone-work. The open shell reminded me of a cut-away for an Indian Mogul's private apartment, with marble carvings as is if fashioned by Italian workman for the Raj.

The process of recording what something 'looks like' may be cursory or obsessive. To see, after all, is not only to glance at or even to gaze, at something, but to study and entertain ideas that occur in the presence of those things. The thoughts inform the outcome. The camera shifts an inch and the image takes on new meaning, but seeing properly is progressive and takes time.

There was time up on the roof to contemplate the shapes of bones: femurs, sockets, crevices, bridges, cavities of mammals, fish and birds, all of which are, if not like pieces of virtuoso architecture, like landscapes. I studied the flying buttresses of the crests of gorilla skulls, the ski slope of the aardvark's profile, and the terrain of the back of a human skull as if,as John McPhee once said, it was were an aerial view of a river valley as the twists and turns of water cuts down through stone. I admired the perfection of three-cusped dog and wolf molars in combination with their business-like fangs, the twig-fragile rib-cage of a flat fish and the bowed arcs of mammal ribs. The comfort that these sculpted animal architectures offer helps alleviate the stories of their interrupted lives.

I harbor a longstanding desire to discover images inherent in, but not always obvious in these preserved creatures. Sometimes the fluidity of appearance reveals things "for what else they are." The camera, by obscuring scale, can turn a fossil tooth into a mountain yet still describe that tooth; a lump of hematite with no optical trick is transformed into the wing of a bird. There are multiple aspects to everything; animals look like things, things like animals. The pangolin has scales like sea shells, the fruit bat's wings fold like an umbrella. Mark Twain once described a chameleon as having the back of a new-dug grave, its eyes like gun turrets. As time passed on the roof, I was fascinated by the ways in which the windows and the walls of buildings both blocked and reflected the light and threw it our way in long, watery streams. A coral-painted wall of the Academy that rises above this surface deflected warm afternoon light on the gravel and stones, light that lasts until sunset (at least during April and May). Directly illuminated by the sun and seen through the close-up lens, a brass mold used to make leaves for artificial trees in exhibits, became, through the close-up lens, a maze of shadowy paths and clearings. Each seed in tiny vials of a collection of many species revealed minute individual imperfections and assumed a singular character. Ancient camel molars offered to the lens details of each striation, and tones of the ink inscription on a piece of fossil bone varied in darkness from word to word, depending, one supposes, on how the bone resisted the pressure of the pen of the writer and how consistent the flow of ink. Back inside, soft available light fell inside and near the window where a broken egg shell lay balanced in its box. Ned Gilmore had retrieved this rarity from a back room, not because it was the finest example of an egg from Ardea rufa (or Rosy Egret) but because it bore the initials in pencil "J.J.A." April 28th, 18XX. John James Audubon himself signed this egg shell. Provenance and scientific data may be all it comes down to in collections. This battered and much be-scribbled specimen is a good example of what must be saved because it was signed by the famous man who found it.

The cultural history of a collected object— its discovery, acquisition, entry into records, preparation, and all subsequent data— takes over its appearance and becomes a significant part of understanding what it is and how it fits into the museum. Certain subjects have elaborate data attached to a leg or head; the territory inside a tray of Tibetan birds collected by Brooke Dolan is taken up by a blizzard of tags with a small bird tied to each almost incidentally, as if to a parachute; the bullets used to kill lions in a series of ballistics experiments come labeled with graphic descriptions of just how each animal was shot, while the still-colorful shells of exotic Land Crabs collected on Flint Island in the South Pacific are held together by string and display simple papers stating name of animal, date and locality. Rosamond Purcell's arresting natural light photography has appeared in international galleries and publications such as Smithsonian, National Geographic, and Slate. Her books include Swift as a Shadow: Extinction and Endangered Animals, Owls Head: On the Nature of Lost Things, and Illuminations: A Bestiary (with Stephen Jay Gould).