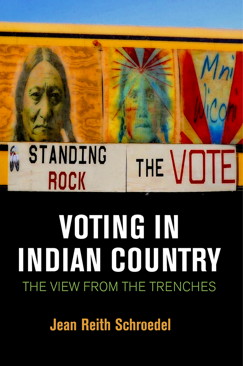 In observance of National Native American Heritage Month, Penn Press is thrilled to share a blog post from Jean Reith Schroedel, author of Voting in Indian Country: The View from the Trenches. Published in 2020, the book uses conflicts over voting rights to understand the centuries-long fight for Native self-determination, using ethnographic data and weaving together history, politics, and law to provide a robust view of this often-ignored struggle for social justice.

Over the past year, there have been some truly historic events of importance for Indian Country. The 2020 election had the highest ever level of Native voting. An unprecedented number of Native candidates ran for state and local political office and nearly 100 were elected. At the national level, the 117th Congress has its first indigenous Hawaiian member, as well as four Native Americans.[1] The number would have been larger, but Deb Haaland (Laguna Pueblo) was tapped by President Biden to become the Secretary of Interior. The Department of the Interior is the Cabinet position that has the greatest impact on Native Americans. It is responsible for the management of federal government owned lands and resources. Three bureaus (Indian Affairs, Indian Education and Trust Fund Administration) oversee a wide range of policies, serving Native American, Alaska Native and Native Hawaiians. And already Secretary Haaland is showing what a difference having Native leadership means.

In June, Secretary Haaland recommended that President Biden restore two Utah national monuments (Bears Ears and Grand-Staircase-Escalante), whose size had been massively cut—by 85% and 50%, respectively—by President Trump and whose land was opened up to coal mining and drilling for natural gas. Then, in October, President Biden acted upon the recommendation and restored the original boundaries. Bears Ears is considered “sacred,” and its restoration was strongly pushed by an inter-tribal coalition, which included the Hopi Tribe. Navajo Nation, Ute Mountain Utes, Pueblo of Zuni, and Ute Indian Tribe. The Department also is addressing other issues of great concern to Native Americans. In April, Secretary Haaland created a Missing & Murdered Unit within the Bureau of Indian Affairs, with funding and a mandate to oversee interagency investigations into the thousands of murdered and missing Native women whose cases had long gone uninvestigated. Then in June, Secretary Haaland announced the creation of the Federal Boarding School Initiative that is tasked with preparing a report on the boarding schools, which she described as inflicting “inter-generational trauma” on Native communities.

It would be naïve to think that Haaland’s appointment (and the good that she is doing) is unrelated to the growing clout of Native voters. In battleground states, such as Arizona, Native voters are in a position to swing elections. But the ability of Native voters to cast ballots is under assault. The Supreme Court’s recent decision in Brnovich v. Democratic National Committee (2021) has especially deleterious effects on Native voters, many of whom do not have home mail delivery and must travel long distances to vote by mail and live long distances from Election Day polling locations. This is why Congress needs to pass the Voting Rights Advancement Act, which includes provisions designed to make it easier for Native Americans, particularly those on reservations, to vote.