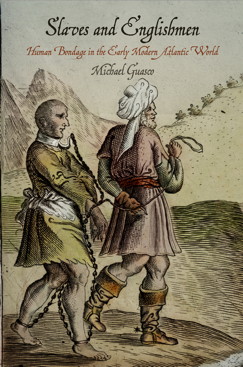 Penn Press is pleased to congratulate our author Michael Guasco, whose book, Slaves and Englishmen: Human Bondage in the Early Modern Atlantic World, has been named a finalist for the Frederick Douglass Book Prize. Awarded annually by the Gilder Lehrman Center for the Study of Slavery, Resistance, and Abolition, the Douglass prize is a $25,000 award and recognizes the most outstanding nonfiction book in English on the subject of slavery and/or abolition and antislavery movements. This is a very prestigious award, and being named one of three finalists is an honor, and a testament to the quality of Guasco's book.

Technically speaking, slavery was not legal in the English-speaking world before the mid-seventeenth century. But long before race-based slavery was entrenched in law and practice, English men and women were well aware of the various forms of human bondage practiced in other nations and, in less systematic ways, their own country. Slaves and Englishmen demonstrates how slavery shaped the ways the English interacted with people and places throughout the Atlantic world. By examining the myriad forms and meanings of human bondage in an international context, Guasco illustrates the significance of slavery in the early modern world before the rise of the plantation system or the emergence of modern racism, and reveals the implications of slavery were closely connected to the question of what it meant to be English.

The Douglass Prize Jury and Review Committee will meet in the fall to select a winner. The prize will be awarded at a ceremony in New York City in late January or February 2016