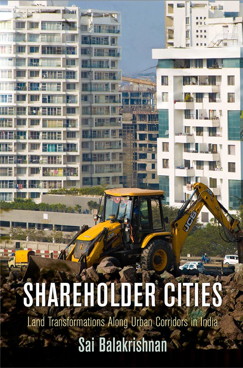 Today we have a guest post from Sai Balakrishnan, Assistant Professor of Urban Planning at Harvard University and author of Shareholder Cities: Land Transformations Along Urban Corridors in India, new from Penn Press. In Shareholder Cities, Balakrishnan argues that some of India's most decisive conflicts over its urban future will unfold in the regions along the new economic corridors where electorally strong agrarian propertied classes directly encounter financially powerful incoming urban firms. Today's blog post highlights key insights from her research and offers an analysis with wider relevance for predominantly agrarian and now-liberalizing countries in other parts of Asia, Africa, and Latin America, many of which are also witnessing similar infrastructural and land conflicts at the crosshairs of agrarian-urban and democratic-market encounters.

In 2001, the Indian government launched one of the most ambitious infrastructure development programs the country has ever seen, comparable in scale only to the massive railway building enterprise of colonial India: the building of new economic corridors. Cutting across multiple jurisdictions, these economic corridors are fundamentally altering the shape of urbanization. Some of the most accelerated urban change in India is unfolding not within the megacities of Mumbai or Delhi but along these new economic corridors, including the Delhi-Mumbai Industrial Corridor. Not only are these economic corridors expanding urbanization beyond the territorial limits of the city, but they are also producing new forms of cities: these corridors have become the spines along which are developing Special Economic Zones, smart cities, and other zones of variegated sovereignty.

These economic corridors cut across vast swathes of agricultural land, and in doing so, they have triggered frenzied conversion of agricultural land into new urban uses. These land-use changes—from agricultural to urban—have been so volatile and publicized that the past 10 years is often dubbed “the decade of land wars” in India. Shareholder Cities focuses on the agrarian-urban land transformations along the country’s first economic corridor, the Mumbai-Pune Expressway. The crux of this book hinges on the question: what new urban theories emerge when older histories of agrarian landed property, capitalism, and caste/class formation collide, collude, and recombine with the new economic corridors and corridor cities?

To answer this question, I focus on three corridor cities that have been built along the Mumbai-Pune Expressway in western Maharashtra. Western Maharashtra is an instructive site for excavating agrarian-urban encounters because the region has a concentration of logistics infrastructures, including the country’s first economic corridor. This region is also home to one of the most powerful agrarian propertied constituencies in India, that of the sugar elites. India is the second largest exporter of sugar in the world after Brazil, and more than 40% of India’s sugarcane exports come from western Maharashtra. The book analyzes how the Mumbai-Pune economic corridor restructured the agrarian sugar economy into new real estate developments. A key insight that emerged is that, depending on the prior agrarian property regime, the same economic corridor—the Mumbai-Pune Expressway—produces varied distributional outcomes in each of these corridor cities. In other words, the western Maharashtra region helps set up a “natural experiment” to excavate how prior agrarian property regimes shape contemporary processes of urbanization.

The book makes three main claims. First, according to the 2011 Census of India, India is 31.16 percent urban. These census definitions do not capture the vast range of jurisdictions that lie somewhere between the global city and the village, such as the three corridor cities along the Mumbai-Pune economic corridor (which are the focus of this book). By focusing on the corridor region, this book moves the narrative of urbanization out of cities into the vast frontiers of the urbanizing countryside, which are the sites of massive new urban enclaves on former agricultural land.

Second, at the core of India’s “great urban transformation” is the transformation of agricultural land. The “enclosure” of agricultural land, which took over four centuries leading up to the Industrial Revolution in the west, is telescoped into a time span of mere decades in contemporary India. Agricultural land, which was one of the least fungible commodities in an earlier state-led agrarian society, is now being transformed into a transnational real estate market. As agricultural land is transformed into a new urban commodity, it is worth returning to Karl Polanyi’s reminder that people “refuse to act like lemmings marching over a cliff to their own destruction”: any market movement will be resisted with counter-movements. This is certainly the case in India, where the commodification of agricultural land is taking place in a context where even the poorest peasant has the power of the vote.

Third, and nested within the previous claim, is the democratic-market conjuncture of India’s “great urban transformation.” India’s land conflicts are situated within the context of twin institutional reforms introduced in the early 1990s: on the one hand, economic liberalization reforms introduced a wave of new market relations in an otherwise tightly regulated, state- led economy; on the other hand, democratic decentralization reforms sought to embed decision-making within local democratic institutions. The title of the book, Shareholder Cities, reflects these tussles between marketization on the one hand and democratization on the other. A key normative concern of the book is to reclaim the “city” in “shareholder city” and for planners to imagine new institutions that can entrench land-use changes in the public domain, where they belong.