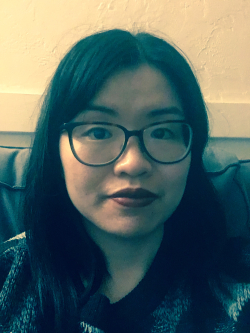 Penn Press is pleased to announce that Jenny Tan, who joined us in August 2020 is now acquiring our lists in medieval, Renaissance, and early modern studies. She has assumed the responsibility for acquiring and expanding our longstanding Middle Ages series as well as the recently established RaceB4Race: Critical Studies of the Premodern series.

Tan is uniquely positioned to acquire within these disciplines, and to help them expand even further. Tan earned her Ph.D. in Comparative Literature and Medieval Studies at the University of California, Berkeley, with a dissertation focused on self-reflexivity and genre in medieval French Romance. Prior to her arrival in Philadelphia, Tan worked at Duke University Press and Princeton University Press, and is an active contributor to the Association of University Presses community, including service on its Acquisitions Committee.

Geraldine Heng, general co-editor of the RaceB4Race series, says of Tan, “I’m thrilled and delighted to learn that the brilliant and dynamic Jenny Tan will be the acquiring editor in medieval and early modern studies at the University of Pennsylvania Press.” Heng adds that “Jenny has the finest instincts as to what constitutes quality, and an unerring sense of judgment. She is the best successor to Jerry Singerman that I can imagine, and Penn is to be warmly congratulated on recruiting her from Princeton University Press.”

"As a long-time reader and admirer of Penn Press's books in medieval and early modern studies,” Tan remarks, “it's a tremendous privilege to now step into the role of acquisitions editor for these lists.” She continues, noting that “I'm excited to build upon our historic strengths and successes, as well as to continue to expand our remit into new and exciting areas as scholars in these fields reimagine what the future of premodern studies might look like.”

Walter Biggins, the Press’s editor-in-chief, adds, “Since her arrival a year ago, Jenny has proven herself to be extraordinary in her instincts and acumen as both an acquiring editor and as a thinker about the present and potential futures of medieval and early modern studies. We’re lucky to have her, and look forward to her furthering her vision for the field at Penn Press.”