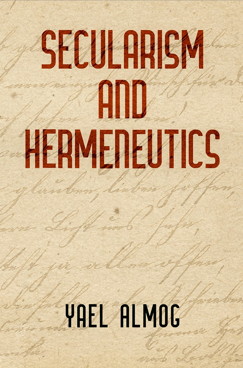 Today's guest post comes from Yael Almog, who teaches at the department of theology at the Goethe University, Frankfurt, Germany, and is author of Secularism and Hermeneutics, new from Penn Press. In Secularism and Hermeneutics, Almog shows that several prominent thinkers of the late Enlightenment era, including Johann Gottfried Herder, Moses Mendelssohn, Immanuel Kant, Georg Wilhelm Friedrich Hegel, and Friedrich Daniel Ernst Schleiermacher, constituted readers as an imaginary "we" around which they could form their theories and practices of interpretation. In today's post, she draws upon this expertise to examine the history of literary theory, pondering how we came to understand the meaning of reading a text.

In contemporary academia, literary theory is the stronghold of radical politics. Training one to unearth the deep or unapparent meanings of literature appears to hone critical thinking. Embracing this pedagogic vision, scholars hold that literary education advances students’ intellect notwithstanding their diverging cultural and educational background. In a sense, training students to become perceptive interpreters perpetuates a major principle of Enlightenment philosophy: Bildung, the human striving for self-improvement through education. In today’s academia, perceptive reading is a route for autonomous thinking, an ideal formulated in such philosophies as Immanuel Kant’s provocative questioning of church and monarchical authority.

The roots of the belief in the liberating potential of literary theory can thus be traced in the late eighteenth century, a period that popularized the consideration of human-beings as independent thinkers and that revolutionized interpretation in accordance with that ideal. Enlightenment thinkers such as Kant contended that all individuals can interpret aesthetic objects, decipher the meaning of signs, and penetrate the deep strata of texts. The period thus largely exempted readers from previous perquisites for literary interpretation including the knowledge of rhetorical tropes, classic literatures, and ancient languages. Viewing readers as equal prompted new interpretive paradigms, such as literary hermeneutics and semiotics. These approaches considered aesthetic artefacts as circumscribed constellations of signs and drew attention to the positioning of those signs in a system. Consequently, readers’ apprehension of texts was put under scrutiny: reading was reconceptualised as a transformative process that hones readers’ cognitive and affective apparatus.

This change, the preference of personal interaction with texts over their erudite examination, was prevalent to one specific textual corpus. Enlightenment thinkers were adamant about the need to alter religion, rather than reject it altogether. In so doing, they turned the Bible into an artefact to which every individual could relate, an object whose cultural significance transcends confessional confines. J.G. Herder and Friedrich Schleiermacher formulated new biblical hermeneutics that centred on the period’s new understanding of texts. Rather than observing the Bible as the product of divine revelation, these theologians considered biblical reading itself as a revelatory, spiritual, and transformative process.

My new book, Secularism and Hermeneutics, investigates the religious neutrality newly ascribed to textual interpretation in modernity. I thus trace the origins of norms of interpretation in the universalization of the Bible in modernity. In particular, I argue that theologians who attempted to transform the Hebrew Bible into a universal cultural artefact advertised textual interpretation as egalitarian and that in so doing, they coined key paradigms of literary theory such as world literature and historicist reading. To establish this, I look at commentaries on Hebrew by Herder, Goethe, Hegel and Schleiermacher as well as at the challenges posed to secular hermeneutics by such authors as Heinrich Heine and Paul Celan. Secularism and Hermeneutics does not present the religious neutrality of interpretation as a fait accompli. I show that literature has recurrently referred to the Bible as the social pillar of religious communities. Literary texts alerted to traditional reading cultures as a continual influence that shapes their own interpretation.

Critiques of secularism formulated in the aftermath of 9/11 have made us alert to the partiality with which Western democracies relate to different religious traditions. Freedom of conscience and religious toleration are seminal democratic values in our culture. Opting to protect those values, Western democracies relegate traditional religious practices to the private sphere and establish public institutions, including schools and universities, as neutral to religious faith. These institutions opt to hone the ability to relate autonomously to cultural artefacts. Essential to the state’s public sphere, schools and universities propagate secular hermeneutics as a perquisite for civil life and political participation.

Such thinkers as Talal Asad and the late Saba Mahmood have argued that the relegation of faith to the private sphere reshaped practices of interpretation particularly in relation to religious texts and icons. These thinkers have contended that reading practices performed in the public sphere presume that the individual stands apart from the text or icon under examination and can reflect on it critically. According to Asad and Mahmood, the Muhammad cartoons controversy in Denmark unearthed the breach between this vision and the attachment to religious icons honed in traditional communities. These scholars have shown critical thinking to be contrasted, in Western liberal societies, to traditionalism, which is conceived as an array of dangerous convictions that are at odds with the Western praise of a dynamic perception of reality and the ability to conceive texts in a historical context.

These tenets can elucidate the transformation of hermeneutics with its introduction as a modern and secular practice. For thousands of years, “hermeneutics” bore meaning in insular communal contexts. Traditional settings shaped believers’ attachment to texts and their understanding of the interpretive act. In the late Enlightenment, there was a pressing need to have the political community gather around common values that transgress confessional affiliation. The idea of a global community of interpreters granted coherence to a group composed of equal and autonomous members who adhere to different faiths. Secular hermeneutics advanced the conceptual understanding of the citizen state, the form of political collective that was about to emerge. This function of readership still echoes in our contemporary understanding of literary theory and in our own gathering around texts.