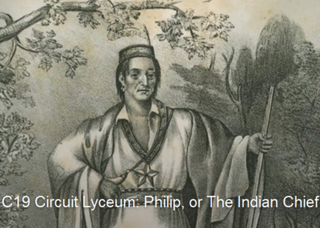 Just as we highlighted, last week, a new endeavor by our journal JHI, today we have something new from the organizers of our journal J19. J19 is the official publication of C19: The Society of Nineteenth-Century Americanists. C19 has initiated a new program, called the C19 Circuit, which will be a series of short regional events and workshops focused on bringing together area students, teachers, and scholars to discuss topics related to nineteenth-century America. The first Circuit event will be a reading and discussion of a previously unknown nineteenth-century manuscript play written and performed by students at a military academy in Vermont in 1838—Philip, or the Indian Chief. The full announcement is below, and you can also connect via the Facebook event page. To learn more about J19, including subscription and renewal information, click here.

The C19 Circuit Presents
Philip, or the Indian Chief, a tragedy in four acts (1838)
12:00–3:00 PM, Saturday, February 14, 2015
Ruggles Hall, the Newberry Library, Chicago
Free and open to the public
Light refreshments will be served

Join in a public reading and discussion of a previously unknown nineteenth-century manuscript play, recently acquired by the Newberry Library. This fascinating original play set during King Philip’s War was written by Jehiel Lillie, a 26 year-old cadet at the Norwich Military Academy, and was performed at the academy in 1838 by a troupe of fellow students. Couched in self-consciously Shakespearian language and situations, “Philip, or the Indian Chief” provides a romanticized but complex account of Native and British interactions. The play assesses the mixed motivations that prompt war and explicitly critiques the notion of “a war of extermination.”

The reading will be framed by brief presentations on the manuscript itself, literary education at the military academy, race in nineteenth-century theatricals, and the Native context of King Philip’s War and the 1838 Cherokee “Removal" by Will Hansen, Curator of Americana at the Newberry Library; Karen Sánchez-Eppler, Professor of American Studies and English at Amherst College; Brigitte Fielder, Assistant Professor of Comparative Literature and Folklore Studies at the University of Wisconsin Madison; and Frederick Hoxie, Professor of History at the University of Illinois Urbana-Champaign

If you would be interested in reading a part please contact Karen Sánchez-Eppler, President of C19, at kjsanchezepp@amherst.edu.

Part of the C19 Circuit, this event is sponsored by The Newberry Library, C19: The Society of Nineteenth-Century Americanists, and The Karla Scherer Center for the Study of American Culture at the University of Chicago. More information at http://www.newberry.org/.