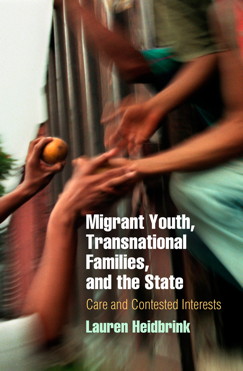 Today we have a guest post from Lauren Heidbrink, an anthropologist and associate professor of human development at California State University, Long Beach. She is also author of Migrant Youth, Transnational Families and the State: Care and Contests Interests, out now in hardcover and paperback from Penn Press. Migrant Youth, Transactional Families and the State examines the draconian immigration policies that detain unaccompanied migrant children, drawing on U.S. historical, political, legal, and institutional practices to contextualize the lives of children and youth as they move through federal detention facilities, immigration and family courts, federal foster care programs, and their communities across the United States and Central America. In today's post, Heidbrink explores the moral stakes of the current state of affairs for young migrants at the border, as detention practices continue to expand in response to an influx of arrivals.

In response to an influx of young migrants arriving at the U.S.-Mexico border, the Office of Refugee Resettlement (ORR) recently opened several large-scale influx facilities in Dallas, Long Beach, and San Diego. Children are being held in these converted stadiums and convention centers until they are reunited with family, transferred to federal shelters for unaccompanied children, or deported. The public knows frustratingly little about what happens to children in ORR care. Migrant Youth, Transnational Families and the State: Care and Contested Interests  is one of the few research studies conducted within ORR facilities. Through observations and interviews with young migrants and staff of facilities across the U.S., this multi-sited ethnography traces the ways young people move through these federal detention, immigration and family courts, federal foster care programs, and their communities following release.

Charged with the care and custody of unaccompanied alien children, ORR subcontracts NGOs to provide a “home-like environment where children receive education, recreation, and specialized services,” as an ORR field specialist described to me. In these facilities, euphemistically called shelters, NGO staff, and by extension ORR, provide for children’s everyday needs such as food, shelter and healthcare. Cast as ideal victims deserving of the moral economies of care, children are viewed as humanitarian victims in need of protection. These narratives frame children as dependent upon adults and the welfare state, and often are rooted in cultural understandings of childhood that accentuates dependency and vulnerability over children’s social agency.

ORR is not alone in its claims of care and caregiving of immigrant children. There are analogous claims to care by privately run, for-profit facilities housing women and small children—facilities which, according to the Department of Homeland Security, were established “to keep families together.” Private prison companies have not skipped a step, with the GEO Group filing for a child care license, while for-profit bond companies advertise their financial services under the guise of family reunification—because “we care about you and your family.”

In spite of particular moral claims to vulnerability and deservingness, unaccompanied children experience this institutional “care” as violence. Young people have shared with me that initially, they feel an overwhelming sense of relief to be safe, take a shower, eat a hot meal, and sleep in bed after a long and often-perilous journey. But as the days and months drag on, young people describe ORR facilities as “lost time,” “traumatic,” and “a nightmare I can’t escape;” as places where “I am treated like a criminal…a threat;” and where “I have no rights.” Children describe constant surveillance, limited communication with family, lack of fresh air and green space, and disturbingly, overmedication. From smaller 12-bed group homes to 500-bed institutions, they struggle to cope with the overwhelming uncertainty of the chance for family reunification, ongoing legal proceedings, and the possibility of deportation. Given limited federal oversight and high staff turnover, abuse within facilities is also well-documented.

Children are not the only ones reaching these conclusions. The American Academy of Pediatrics identifies that detention results in high rates of posttraumatic stress disorder, anxiety, depression, suicidal ideation, and other behavioral problems. These symptoms do not disappear upon release. Even brief detention, child development experts concur, can cause psychological trauma and induce long-term mental health risks. Under the veil of care and claims to best intentions, the state, private prison industry, financial service industry, and even NGOs prey upon immigrant children and families. All fail to openly acknowledge their complicity in the immigration industrial complex. Migrant Youth, Translational Families, and the State evidences the enduring effects of immigration enforcement on its young charges, their families, and the state, ultimately questioning whose interests drive decisions about the care and custody of migrant children.