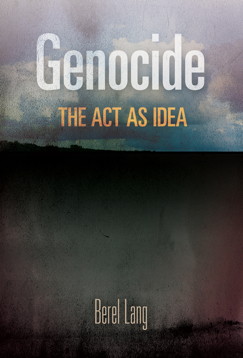 Today, Berel Lang—author of Genocide and Professor of Philosophy Emeritus at the State University of New York, Albany—offers a brief summary of his exciting, provocative book.

A more adventurous title for my book would have been A Defense of ‘Genocide’—for this is, put succinctly, its thesis:  a defense of the concept of genocide and its distinctive importance in moral and legal thought and practice.  The history of the concept’s origins and application has been a history of struggle—initially on the part of Raphael Lemkin in his creative efforts to distinguish the crime he identified from other types of atrocity and murder, and then subsequently, also largely on Lemkin’s part, to win the concept’s incorporation in international law.  Notwithstanding its general acceptance in common usage, this struggle over the concept did not end even with the adoption by the United Nations of the ‘Convention on the Prevention and Punishment of the Crime of Genocide’ in 1948; it figures still in continuing attempts to replace  ‘genocide’ by other terms such as ‘crimes against humanity’ or ‘war crimes’.  My book argues that these alternatives,  compelling for other purposes, nonetheless fail to capture the distinctiveness of ‘genocide’ as ‘group-murder’—and that when they do point at that crime, they revert to considering genocide, its act and idea, much in the form of Lemkin’s original conceptualization.  I also emphasize a further, largely neglected implication of the concept of genocide in its importance for calling attention to the broader concept of group rights.  For among any rights ascribed to a group, its right to existence would be primary: a condition on which any others would depend.