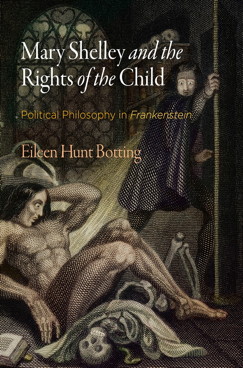 Today we have an exciting guest post from Eileen Hunt Botting, Professor of Political Science at the University of Notre Dame and author of Mary Shelley and the Rights of the Child: Political Philosophy in "Frankenstein," out now from Penn Press. Botting's book argues that Frankenstein is more than an original and paradigmatic work of science fiction—it is a profound reflection on a radical moral and political question: do children have rights? Here, she elaborates some of the key elements of this argument.

Do children have rights? Frankenstein’s Creature thinks so. Mary Shelley gave the most famous monster of modernity the chance to speak up on behalf of the rights of all children—no matter why, where, by whom, from what, in which form, or how they were made. The Creature pleads to his father-scientist Victor Frankenstein the fulfillment of his “right” to “live in the interchange of those sympathies necessary for my being.” The Creature fleshes out this fundamental right of the child as a right to share “love of another,” especially with a parent or a fitting substitute for a parent. By demanding this right from his derelict father—the scientist who heartlessly abandoned his creation at birth due to a hideous deformity—the nameless, loveless Creature makes clear to the reader the emotional urgency of this right to love for all children, and especially those who have been neglected, abused, and deprived of community.

The Creature’s demand for a right to share love resonates with us 200 years later because Shelley’s story has become the dominant modern myth and the source of all science fiction. Like any myth, you don’t have to read Frankenstein to understand its core narrative. Shelley quite consciously reforged in the smithy of her imagination the story of Prometheus for an age of science and technology: the tragedy that humanity might use science to create the means of its own destruction. The super-saturation of this myth in modernity allows us to explore the still-radical question of the rights of the child from different angles, in different genres, and across cultures.

There are three critical frontiers of children’s rights in the 21st century that the story of Frankenstein’s Creature bears upon: these are the rights of stateless, disabled, and genetically modified children.

The Creature is a stateless orphan, abandoned by family, abused by society, and ignored by the law. He finds himself in a similarly unjust and tragic political predicament as the young Americans who have recently lost the rights associated with the Deferred Action for Childhood Arrivals (DACA) policy of the Obama administration. The Creature lacks citizenship both in his family’s country of origin and in the country in which he grew up. Worse, like other stateless children, the Creature faces prejudice, mistreatment, and further marginalization due to his liminal, almost spectral, occupation of the political borderlands of the human community. Worst, like many stateless children, the Creature is effectively an orphan—living without his family of origin, due to neglect, abuse, or violence in or around the home and homeland. By sympathizing with the political predicament of the Creature as living totally alone—bereft of both family and state—the reader of Frankenstein comes to see the vital entitlement of community for all children, regardless of national origin, familial status, or migratory pattern.

The Creature is a disabled child, born with a craniofacial deformity. From birth, the Creature is subject to discrimination on the basis of this disability and birth defect. He is deprived of care, love, and even a name due to his father-scientist’s horrified reaction to his visage, especially to an unspecified facial deformity in the region between his eyes and his lips. The Creature can be compared to the 1 in 700 children born with cleft lip and palate, who face a lifetime of discrimination, and sometimes even neglect and abuse, due to society’s stigmatization of their disability as monstrous. The Creature’s story helps us to see that science and medicine is necessary but not sufficient to address the deeper social justice issues facing these and other disabled children. All children with birth defects such as cleft lip and palate have an urgent right to the medical care they need to grow and thrive in their own distinctive ways, but they also have a far more fundamental right to be recognized, respected, and yes, loved, within a community—beginning in the family and extending through society, culture, and law.

Most presciently, the Creature can be compared to a genetically modified child, made from the parts of humans and other animals. In 2017, scientists have reported the successful use of the genome editing technique CRISPR-Cas9 to make a part-human chimera from a pig embryo infused with human pluripotent stem cells. For 20 years, scientists have been experimenting with three-person IVF, which has produced an estimated 50-100 genetically modified children with the DNA of three people. Many more will arrive soon as Britain has legalized one form of three-person IVF for purposes of preventing the inheritance of mitochondrial diseases, such as Leigh Syndrome, which often cause developmental disorders or early death. With the recent invention of CRISPR-Cas9—the most efficient and cost-effective tool for genome editing—we should expect to see designer babies with heritable changes to their nuclear DNA in the next 10-20 years.

In this new age of genetic engineering—as the political philosopher Michael Sandel has called it—we ought to heed the voice and story of Frankenstein’s Creature. What will it be like to grow up as a genetically modified child in a culture that puts a high price on non-GMO labels? What forms of discrimination—explicit and implicit—will these children of biotechnology face? Mary Shelley, just a teenager when she wrote one of the greatest novels of all time, forged the modern myth that can help us address these moral and political questions in the here and now.