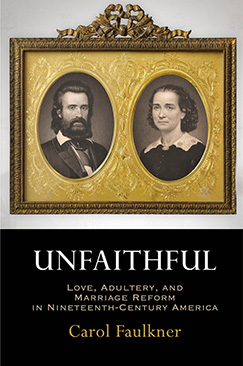 Today, we have an exciting and topical guest post from Carol Faulkner, Professor of History at Syracuse University and author of Unfaithful: Love, Adultery, and Marriage Reform in Nineteenth-Century America. In Unfaithful, Faulkner chronicles how nineteenth-century reformers mobilized both the metaphor and the act of adultery to redefine marriage between 1830 and 1880 and explores the ways in which their criticisms of the legal institution contributed to a larger transformation of marital and gender relations that continues to this day. In today's post, Faulkner summarizes key events in this history, summarizes the crucial insights and themes that can be drawn from them, and notes their relevance for contemporary understandings of marriage.

Marriage was a pivotal issue for a variety of nineteenth-century social movements. Women’s rights activists, utopians, spiritualists, abolitionists, and free lovers all perceived legal marriage as hierarchical (the power of the husband) and coercive (the power of the law). Advocating new, more egalitarian forms of marriage, they redefined adultery between 1840 and 1880. Seeing loving consent as the essence of a “true marriage,” they insisted unhappy unions were “adulterous” betrayals of an individual’s right to be with the person they truly loved. Although an intersecting, and often antagonistic, mix of activists embraced reformist ideas of marriage, they found it difficult to sustain these ideals in their own marriages.

The cover of my book pictures spiritualists and marriage reformers Andrew Jackson and Mary Fenn Davis. In 1854, Mary and her ironically named first husband Samuel Love decided that they no longer cared for one another. She traveled to Indiana, the state with the most lenient divorce statute in the country, to secure a divorce. The following year, Mary married Andrew Jackson Davis, who had counseled Mary and her husband that “all intercourse not prompted by mutual love is positive adultery.” Samuel Love had a different definition of adultery. Believing the Indiana decree invalid, he filed for divorce in their home state of New York, where infidelity was the only basis, citing Mary’s relationship with Jackson Davis.

Despite this initial scandal, the Davises embarked on successful, and profitable, careers lecturing and writing on marriage. Mary Fenn Davis became active in the women’s rights movement, and, in her speech at the 1856 National Women’s Rights Convention, she denounced the husband’s right to demand sex with his wife. She argued that women should control reproduction. Susan B. Anthony praised her for “lifting the curtain” on the marriage relation. Together, Mary and Jackson lectured to paying audiences of thousands of people.

A variety of reformers embraced these ideas of marriage. Abolitionist Henry Clarke Wright praised Jackson Davis’s lectures in the National Anti-Slavery Standard.  While African American spiritualist Paschal Beverly Randolph viewed Jackson Davis as a fraud, he likewise advocated the higher law of true love. As feminists debated when to advocate liberal divorce laws, free lovers Stephen Pearl Andrews and Julia Branch upstaged them by declaring that women needed sexual and reproductive rights more than the vote. The resulting sensation frightened some feminists and emboldened others. In 1860, Elizabeth Cady Stanton argued that states should abolish unhappy marriages.

As critics intensified their attacks on the institution of marriage after the Civil War, some reformers grew uncomfortable. Spiritualists, free lovers, and feminists initially welcomed Victoria Woodhull to the cause. But when she and Stephen Pearl Andrews exposed the Rev. Henry Ward Beecher for his affairs, feminists abandoned her and marriage reform itself.  Woodhull famously declared herself a free lover and characterized loveless marriages as “adulterous.” She also identified Beecher as a fellow free lover, and she urged him to preach what he practiced. Yet when Beecher faced a civil suit for criminal conversation (or adultery) it did little to diminish his status as the nation’s leading minister, and marriage reformers dropped their efforts to redefine adultery, stymied by a national, legal spectacle that reinforced its technical definition.

Though marriage reformers convinced many Americans that marriage and love should be synonymous, they failed to create relationships that were truly equitable. In 1885, after almost thirty years of marriage, Andrew Jackson Davis sought an annulment in New York State. He argued that he and Mary had never been legally married because New York laws forbade the “guilty” spouse from remarrying after a divorce. In addition, Jackson insisted that a spirit had conveyed that Mary was a “co-worker” early in their marriage. Since then, he had treated her as a sister and their union as a business relationship. Jackson told Mary that the annulment would allow them to “be true” to themselves. She consented to the nullification of their bond. While Jackson was free to marry again (and he did), she was now an adulteress who could not. They had begun their marriage with high ideals, but both the higher law of love and the statutes of man still reinforced the prerogatives of husbands.

In the nineteenth century, journalists, pundits, and many of their fellow activists, portrayed the Davises and other marriage reformers as dangerous fanatics, who threatened the social and religious order. Historians have relegated them to the fringe of American social movements. Yet their reformist ideals of marriage have had a lasting impact on Americans’ approach to love. Even the most radical marriage reformers, the free lovers, advocated what we would call serial monogamy. Now, many Americans accept that divorce is the answer to unhappy marriages. Marriage reformers also began a conversation about women’s autonomy and consent that continues today.